What the numbers say about the government's rapidly aging workforce

The Canadian workforce is aging—yes, we’re talking about you again Baby Boomers. So, it won’t be news to anyone that the federal public service, which comprises almost one per cent of the population, is greying as well. As civil servants get older, they’re keeping their jobs longer—thanks to advances in medicine and an increased retirement age. In fact, between 2000 and 2013, there has been a 32.3 per cent increase in the percentage of civil servants between the age of 50 and 59, and a whopping 161.2 per cent increase in employees aged 60 and over.

Here is what the distribution of ages of federal employees looked like in 2000 and in 2013. 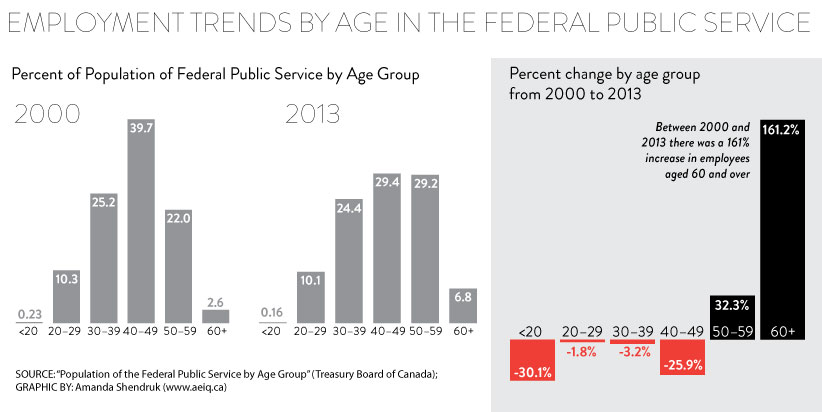 The above information is an average over all federal departments and agencies. Thankfully, the Government of Canada keeps all kinds of interesting data, including an age breakdown of federal employees by agency. Looking at more detailed statistics, then, we can find the oldest and youngest departments—or at least those that rank significantly above average in each of the age categories.

Which government agencies are bucking the aging trend? And which are hanging on to their employees for longer?

Check out the data yourself:

Population of the Federal Public Service by Age Group

Population of the Federal Public Service by Department and Age Group