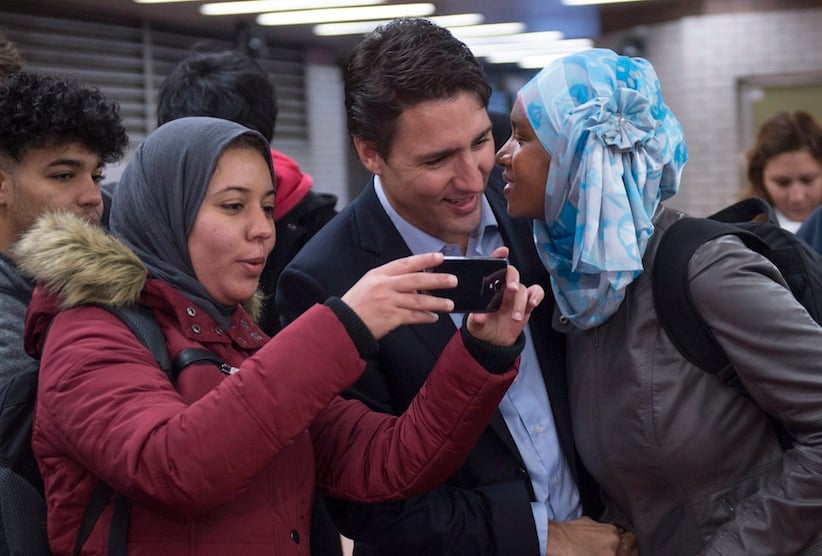 A woman kisses incoming prime minister Justin Trudeau as he greets constituents at a subway station in his riding of Papineau on Oct. 20, 2015, the morning after winning a majority government in the federal election (Paul Chiasson/CP)

That, on the morning after, he would go to a local metro station to greet commuters was decided over the weekend, when it was exceedingly possible to imagine that it would be his first act as the next prime minister of Canada. And so there he was, strolling into Jarry station in his riding of Papineau before 9 a.m., no aides or entourage in immediate tow, his security detail keeping a bit of distance as he shook hands and posed for pictures.

This was, in the parlance of the business, a photo opportunity. Which is to say it was not entirely uncontrived. Which is to say it was surely thought by someone to convey a particular message. But which is not to say that it was an empty or shallow gesture. Symbolism can matter, most particularly if it is symbolic of practical, meaningful action.

Some hours later, his campaign bus pulled up underneath the Peace Tower and out came Justin Trudeau, stopping to wave at well-wishers before he walked up the steps and through the front door of Centre Block (just vaguely reminiscent of his father’s most remarkable scene).

Then, at day’s end, an appearance at the National Press Theatre, the press gallery den that hasn’t hosted a sitting prime minister since 2009 or so. “I’m very happy to be here to be able to demonstrate my commitment to offer, in the coming days, an open and transparent government with people,” he said. “I think it’s important to underline the important role the media fills in public discourse and public life. And I look forward to continuing to engage with you all in the coming days, weeks, months and years.”

The question of Justin Trudeau’s readiness—presented as something like the ballot question by his opponents—is now sort of moot. A sufficient number of eligible voters was either assured of his readiness or willing to give him a chance—or at least satisfied that he wasn’t any more ridiculous than the other candidates on offer—to elect 184 Liberals, and that is more than enough to give Justin Trudeau a full four years in power. He will be prime minister—officially on Nov. 4, he revealed today—whether he truly and verifiably qualifies as a serious person or not.

Is Justin Trudeau sufficiently serious? Presumably, any unseriousness will be exposed by the strain and pressure of governing. Is Justin Trudeau for serious, as the kids say, about all that he has promised and mused about doing? That is perhaps the most important question.

The latter could fairly be wondered of any prospective leader. For the candidate, it is always easier to promise to do than to do. For the voter, the best way to avoid disappointment is never to get one’s hopes up. But it’s most tempting to hope, in the hazy afterglow of an election resulting in change.

To go back to the start, three years ago, there was a shaggy, possibly unshaven Justin Trudeau wearing a T-shirt, sitting in his kitchen and staring into his phone or laptop, telling his supporters that “together, we’re going to change the way politics are done in this country.”

Changing the way politics is done in this country could reasonably be understood to potentially encompass any number of adjustments, from a different set of policy priorities to a commitment to smile more often to an agenda for widespread reform of our democratic institutions and practices. His first news conference as prime-minister-in-waiting was a reminder of how much could soon be changed: new targets for greenhouse-gas reductions and a new engagement with the international community as it relates to climate change; a cabinet constructed with gender parity and newly empowered ministers; a withdrawal of Canadian fighter jets from the skies over Iraq and Syria; a new system of appointing senators; a new law on assisted suicide; a new way of electing MPs; a new inquiry into missing and murdered Indigenous women; a new engagement with the United States.

He was quiet, almost hushed. In response, he looked to one side and then the other, his gaze seeming to fall just above the heads of the seated reporters in front of him. He can seem, in front of the cameras, to be moving consciously into his responses, but he was basically calm and noticeably measured, perhaps tired, perhaps aware of what he was now, perhaps a little something too like serene.

That he is soon to be the 23rd prime minister of Canada will still strike some as preposterous, and still others as fate. That his seriousness has been questioned so prominently is possibly to hold him to a higher standard of seriousness than his more stereotypically serious rivals. (It was not Justin Trudeau who cancelled the long-form census nor he who committed $1.5 billion to a home-renovation tax credit.) He is a wholly unprecedented candidate—not merely handsome and charming and gifted as a public figure, but the son of a celebrated prime minister and a young man whom several generations of Canadians watched grow up. And, in the absence of acceptably significant postings or scholarship, and in light of some awkward moments, it has been easy to assume shallowness. But whoever Trudeau is—however you imagine him to be—it perhaps always would be, and is now certainly, down to what he does with what he has.

The first thing he did with it was to walk into a metro station and start shaking hands. He said later that “being in touch with Canadians” was a priority, that he wanted to be “open, accessible and in contact with Canadians.” Quite literally, apparently.

Four months ago, in Edmonton, he’d gone out to meet a group of citizens who were, on account of his support for C-51, protesting a Liberal event that Trudeau was attending.

In August, in Montreal, a campaign event was interrupted by two people with concerns about climate change. Trudeau walked over, put forward the microphone he was carrying and let them clearly state their question.

One might quibble with his responses to either question, but there might also just be something in his willingness—a currently unrivalled willingness and a willingness that runs counter to the conventional wisdom of risk aversion.

That the Conservatives will be replaced in two weeks is something of consequence, but it also surely matters what happens next. And so a tally could be drawn up of every complaint that has been loudly and semi-loudly registered these last 10 years, not only about the policies that have been implemented, but about how Stephen Harper’s party has governed—about transparency and accountability and openness and tolerance for dissent and omnibus budget bills and question period and evidence-based policy and talking points and tone and and respect and process. Trudeau has made a couple of dozen commitments to changing the practice of politics and he has mused about basically changing everything about how we understand government and democracy. So, what now? Changing the policy priorities of the federal government would seem relatively easy, compared with meaningfully improving the way those policies are discussed, scrutinized and debated. A differently focused government could still be an achievement; no doubt any number of New Democrats are anxious at the possibility of arguing that the Liberal, once again, ran to the left, only to govern to the right—but a different kind of politics is something else.

Granted, that a new style of governing awaited is perhaps the eternal promise of the new government. It certainly was in 2006 (and before there was so much to lament, there were small measures of progress) But that window is open anew (and fresh air sometimes seeming so desperately needed). So now we find out how serious Trudeau is, or can be, about that.

“I’ll be back,” he said in parting this evening, asked by a reporter if we’d be seeing him in the national press theatre again. “I promise.”

So that’s at least a commitment to one more news conference at some point in the next four years. So that’s something.

That he walked into that metro station on Tuesday morning was an even nicer way to start. The question now might be whether he remains so willing four years hence.