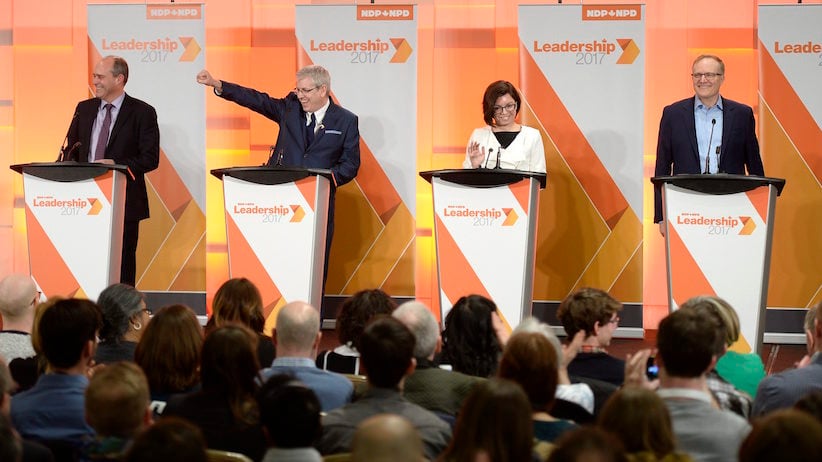 Guy Caron, left, Charlie Angus, Niki Ashton and Peter Julian react to the audience as they arrive on stage for the first debate of the federal NDP leadership race, in Ottawa on Sunday, March 12, 2017. THE CANADIAN PRESS/Justin Tang

It is a hallowed Canadian custom, and a heritage particularly cherished by Liberals and Conservatives, that the NDP can be relied upon, given any reasonable opportunity, to put on a dour and preachy political spectacle. So the often lively and even, at times, lighthearted first debate of the race to replace Tom Mulcair as leader of the third-place federal party must have landed as a disappointment to the NDP’s adversaries. Can no tradition be counted upon in these turbulent times?

The NDP’s advantage over the Conservatives this winter, when it comes to putting on a watchable leadership debate, is largely a numbers game. There were only four contenders on the NDP stage in Ottawa this afternoon, a far more manageable field than the 14 aspirants (well, 13 when Kevin O’Leary doesn’t deign to show up) that has prompted the custom-podium sector to add extra shifts to keep up with demand from the Conservative debate circuit.

But the NDP organizers also orchestrated the tempo of today’s debate nicely, alternating sections that allowed shorter and longer answers, switching between English and French, sometimes having the candidates square off one-on-one, and breaking up the flow with snappy segments of fun questions about favourite movies, childhood meals, and winter sports.

A little contrived? you wonder. Sure. But it beats the alternative: 90 minutes of, as I might already have mentioned, a dour and preachy political spectacle. And if the format didn’t set off serious sparks or expose stark divides, key differences in the propositions each of the four candidates is offering NDP members, in a contest that doesn’t conclude until next fall, began to come into focus.

Taking the four from west to east, here’s how I heard what they are offering, with an emphasis on what sets each one apart:

B.C. MP Peter Julian has to overcome the impression that he is a stolid but unexciting veteran. He said the two top issues the NDP must address are “the rise of profound inequality [and] increasing poverty, and the worsening impacts of devastating climate change.” No surprise there.

Throughout the debate, though, he repeatedly directed his attention at quite precise issues under those two broader thematic headings. On climate change, Julian repeatedly asserted his unequivocal opposition to both the Kinder Morgan and Energy East pipelines. On inequality, he often came back to cracking down on offshore tax shelters.

His strategy seems to be to try to avoid merely voicing NDP orthodoxy on the big themes by hitting those two hot buttons—pipelines and tax shelters—every chance he gets to make his stance feel less abstract and more urgent.

Manitoba MP Niki Ashton needs to persuade New Democrats who, under Jack Layton, entertained the heady thought that they were on the brink of power, that forming government really isn’t everything. “We are not a party that’s just here to win elections,” she said. No indeed.

Of the four candidates, Ashton talks most fervently about seeing the NDP less as a conventional party and more as the partisan manifestation of a “movement.” “We must launch a movement together, a movement for social environmental and economic justice for all of us,” she said.

What wasn’t clear in the debate is whether Ashton plans to offer a strategy for converting that movement’s energy, at some point, into a winning election campaign. If she means to propose the NDP as an umbrella group for progressives, rather than a party seriously aiming to win the most seats in some future federal election, hers will be an odd campaign.

Ontario MP Charlie Angus is, of those in this race to date, the one who has most taken to heart the notion that political leadership has to be rooted in personal narrative. True to form, his closing statement featured his grandmother, an “immigrant mining widow” in Timmins, Ont., telling him as a lad to pay heed to then-Ontario NDP leader Stephen Lewis as “our voice.”

Perhaps you’ve also heard that Angus once played bass in a punk rock band? He’s good at projecting his story. This isn’t a trivial point: Many elections have been won and lost on the basis of voters feeling they somehow know one politician asking for their vote better than another.

So far, at this early stage, Angus has sketched his persona, rather than his platform. And he said today that he doesn’t “buy this false binary that the NDP is supposed to be just there as the conscience of Parliament, that we’re sort of too pure to win.”

Quebec MP Guy Caron‘s reputation, where he has a reputation, is as a policy wonk. Still, he scored the biggest laugh of the debate, when he said Justin Trudeau will go into the next election “quoting another famous Canadian Justin,” by asking progressive voters, “Is it too late to say sorry?” (That would be, for those whose playlists run more to “Solidarity Forever,” the refrain from Justin Bieber’s hit “Sorry.”)

Caron wasn’t just getting off a good one. He was more pointed than any of the other three in taking explicit aim at Trudeau. He predicted that progressive voters will be so disappointed with the Liberals by 2019, over electoral reform, climate change and poverty, and more, that they will be open to looking again to the NDP.

But he said the NDP will need policy—starting with a basic guaranteed income—to coax back disillusioned left-of-centre voters. Caron was clearest among the four in promising lots of concrete policy, and not just assertions of principles, or expressions of solidarity with oppressed groups.

So that’s one NDP debate down, with Julian pushing hot buttons, Ashton talking up a movement, Angus spinning his own yarn, and Caron selling policy to lure back wounded lefties. All that and it wrapped up in plenty of time to switch mental gears for the even subtler gamesmanship of the Brier final.