The fiscal update: We are in for a hard winter

Shannon Proudfoot: Enormous quantities of money will be spilled to try and get Canada through the coming months and, maybe, into a shiny spring 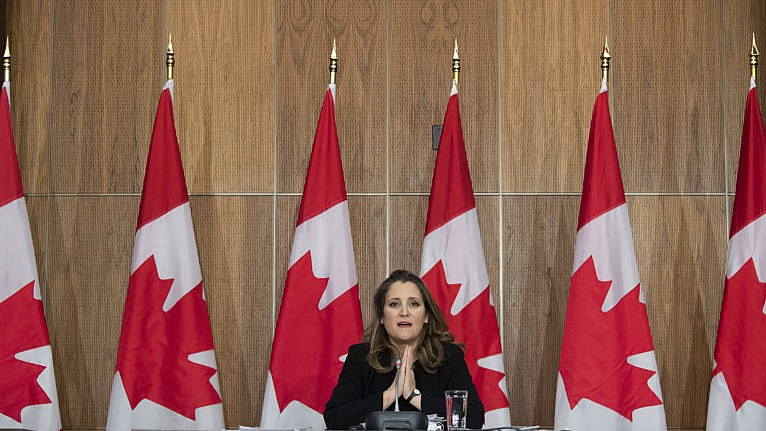 Freeland speaks about the fiscal update during a news conference in Ottawa on Nov. 30, 2020 (CP/Adrian Wyld)

It’s the first major economic progress report the government has provided since it was a majority still in its first term back in March 2019, long before phrases like “social distancing” or “personal protective equipment” entered everyone’s casual vocabulary. And the opening words in this long-awaited fiscal update are poetic rather than practical:  “As we battle COVID-19, Canadians are in for a hard winter,” begins the forward attributed to Finance Minister Chrystia Freeland. “But we know that spring will surely follow.”

This theme was mined to a near-comedic degree in Freeland’s remarks to the House of Commons when she tabled the fall economic statement on Monday, and throughout the document itself. But the details make it clear that in terms of any big green or progressive reimagining, this is a roadmap built for winter and not yet an ambitious spring, given that the country is still hunkered down under a gathering snowstorm.

The lion’s share of this not-a-budget is focused solely on combatting the ongoing health and economic carnage of COVID-19. Those two chapters add up to $61 billion in spending on PPE, vaccine rollout, long-term care—including $1 billion in new funding to the provinces to help make safer the facilities where so much of the coronavirus devastation has taken place—wage and rent supports, tax breaks for struggling individuals and businesses and help for sectors that have been particularly hard hit.

The third chapter, entitled Building Back Better, carries the relatively modest price tag of $13.5 billion and is supposed to be about “ensuring the economy that comes after this pandemic is more innovative, inclusive and resilient than the one that preceded it,” as Freeland told the House.

Freeland described these measures as a “down payment” on a refreshed vision of Canada that will arrive when this country and the rest of the world have shifted out of emergency mode.

The fiscal update referenced economist Armine Yalnizyan’s term for the asymmetrical effects of the COVID-driven “she-cession” in which women’s jobs have been disproportionately affected and the extra burden of child care has also fallen largely on their shoulders. The government pledged an extremely modest $850,000 for the creation of an Action Plan for Women and the Economy, along with $20 million over five years for a Federal Secretariat on Early Learning and Child Care to help “engage stakeholders to provide child care policy analysis in support of a Canada wide-system.” The government has also pledged $70 million over five years for an Indigenous version of the same.

“I think that the noises are good and that we can expect considerably more in the budget, which may be appropriate,” says Yalnizyan, Atkinson Fellow on the Future of Workers. “Personally, I wish they were more ready, but I recognize why they aren’t; when it comes to childcare, they need dance partners at the provincial level, and the provincial level hates them—at least four premiers.”

In 2016 and 2017, the government committed $7.5 billion over 11 years for early learning and childcare, and in this fiscal update, it proposes making that funding permanent, at $870 million a year, starting in 2028-29, when the current commitment would otherwise expire; of that, $210 million would be earmarked for Indigenous services.

The government is also pledging special payments for 1.6 million families who qualify for the Canada Child Benefit: up to $1,200 per child under age six for families earning less than $120,000 a year, or $600 per child for those over that threshold.

Much of what’s on offer in this area, though, is the suggestion of something big in the spring 2021 budget in terms of childcare.

“We know that COVID-19 is rolling back many of the gains Canadian women have fought for and won in my lifetime,” Freeland said in her prepared remarks. “I say this both as a working mother, and as a Minister of Finance: Canada will not be truly competitive until all Canadian women have access to the affordable childcare we need to support our participation in our country’s workforce.”

The significance of that “lived experience” was striking to Yalnizyan. “The other thing the fall economic statement did—by the first female finance minister in Canada’s history, in the cabinet of the first self-declared feminist government,” she said, “is actually make it sound like they get it, they get what half the workforce was dealing with.”

But baked right into the government’s lofty statements is the very long history of attempts to tackle this issue. “December 7, 2020, will mark the 50th Anniversary of the Royal Commission on the Status of Women in Canada, a landmark report that called on the federal government to immediately begin working with the provinces and territories to establish a national daycare system,” the fiscal update says. “On the eve of this anniversary, the federal government is committed to historic investments that will make this promise a reality.”

The government presented its socially progressive ambitions in the same light as those it harbours for an innovative new green economy for Canada: something the country cannot afford not to do. “Mr. Speaker, we know that Canada’s future competitiveness depends on our ability to take advantage of the net-zero green economy,” Freeland said in the House. “Our growth plan must continue to advance our progress on climate action and promote a clean economy.”

To that end, the government finally attached a price tag—$3.16 billion over 10 years—to its 2019 plan to plant two billion trees. It also pledged $2.6 billion over seven years for a home energy retrofit program to help people make their homes more efficient, with the help of grants of up to $5,000; similar programs have proven enormously popular in the past. There is also $150 million over three years on offer to build electric vehicle charging stations, in a bid to encourage people to buy zero-emissions vehicles.

But as the balance of ink and enormous quantities of money spilled on this fiscal update make clear, the first job is emerging safely from these dark and dismal months of stress, fear and grief before anyone can think about how shiny the spring might be.