The Ford government tables a budget. When will Ottawa set a date? 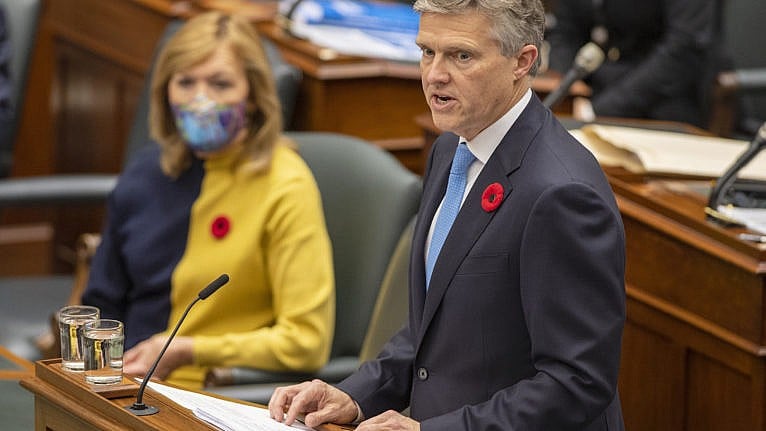 Ontario’s finance minister, Rod Phillips, delivered a budget in the middle of a pandemic. In his speech, Phillips said the Progressive Conservative plan “provides as much certainty as possible in an uncertain time, ensuring that we are always there to support those who need it most.” Liberals have taken a hit for not forecasting Canada’s fiscal future beyond a single year.

Phillips, by contrast, offers three-year projections. His budget forecasts a $33-billion deficit next year and $100 billion more debt by 2023, and predicts Ontario’s GDP will decline by 6.5 per cent this year before bouncing back at a 4.9-per-cent clip next year. The province’s debt-to-GDP ratio will rise to 49.6 per cent by 2023. Watch the full budget speech.

A new poll from Abacus Data pegged PC support at 36 per cent, a seven-point advantage over their closest opposition. And that rival is once again the Liberals instead of the New Democrats who surged to Official Opposition status in 2018. The Tories appear competitive in Toronto, where they’re down three points to the Liberals and nine ahead of the NDP.

Keep on truckin’: Rumours of the demise of Ontario’s auto industry appear to have been premature. Jerry Dias, the head of the union that represents thousands of workers, showed off a new deal that’ll see General Motors re-open its assembly plant in Oshawa—and build the Chevy Silverado and GMC Sierra. The investment clocks in at $1.3 billion, which builds on Ford’s announcement last month of a $1.8-billion plan to build electric vehicles in Oakville (with fed-prov assistance). Dias claims the new shift will create more than 2,000 jobs. Flavio Volpe, the head of the auto parts manufacturers association, credited new NAFTA/CUSMA/USMCA provisions for the flurry of spending.

Days after a terrorist attack in France that authorities have blamed on extremists who were enraged by caricatures of the Prophet Mohammed appearing in the pages of satirical mag Charlie Hebdo, Justin Trudeau offended much of France by supporting limits on free speech. Recall his words: “We owe it to ourselves to act with respect for others and to seek not to arbitrarily or unnecessarily injure those with whom we are sharing a society and a planet.” The PM planned a phone call with French President Emmanuel Macron yesterday to attempt to smooth things over.

Your daily COVID update: Every day, Patricia Treble is watching the latest developments in Canada’s battle against the second wave of the coronavirus. Yesterday, she marked a milestone and a troubling trend.

Another day, another milestone. Since the first case of COVID-19 in Canada was identified on Jan. 25, more than 250,000 Canadians have been infected with the disease, including 3,334 on Wednesday. The current growth of the pandemic is occurring at a speed nearly double that of the first wave in the spring. In the past week, Canada has added an average of 3,267 cases each day.

Former Conservative MP Lisa Raitt posted a moving series of tweets about her husband, Bruce, who suffers from young onset Alzheimer’s. He usually rises well before sunrise, she said, “babbling, cursing, shining flashlights around the room, turning on the overhead lights, growling.” She posted a video—with a bit of foul language—from just such a morning. “When he does go to sleep at 7:30 pm (I’m grateful) that’s when I go back to work to finish up the day. I can’t work unless Bruce has a caregiver or is sleeping.”

Every major American network sounds like a broken record at this point as key states in the presidential election remain too close to call more than three days after polls closed. But you can stay up-to-date on every development on our live results page.