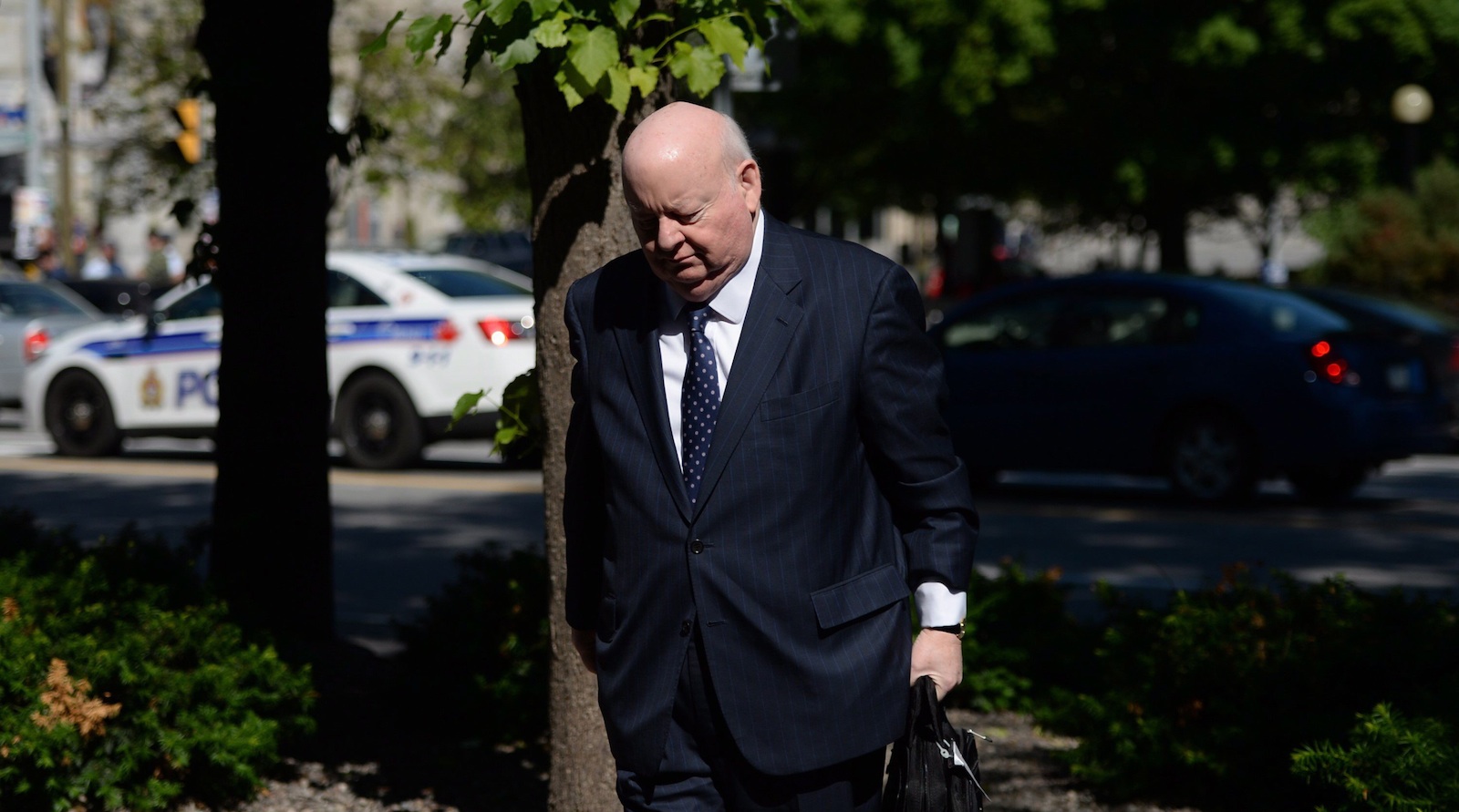 Like a doctor coolly assessing, in the third person, the health of a patient in less-than-stellar health, standing there saggy and naked and in front of an audience, Mark Grenon, a forensic accountant, today walked Courtroom 33 through the personal finances of Mike Dennis Duffy, as they stood while Duffy remained a senator for P.E.I.

According to Grenon, a mild-mannered witness for the Crown, Duffy’s finances stood only with difficulty, wobbled regularly in precarious fashion, and required routine transfusions from a line of credit.

This all emerged as part of a voir dire—a trial within a trial—focused on how much of Grenon’s testimony can be adduced as evidence in this trial. As Grenon spoke, and as details of Duffy’s finances appeared on the court’s large-format TV screens, Duffy himself sat in the corner, his reddening face a mask of stoicism.

There was something unsavoury, even voyeuristic about seeing this autopsy of old dollars rolling through various Duffy-related financial records. And yet it proved illuminating.

We saw personal bank statements chronicling money flowing in and out, credit reports listing assets—his and her Mercedes, according to one—and Grenon’s own meticulous reconstruction of a line of credit that the RCMP investigation could not get ahold of, and which Grenon said kept Duffy afloat as he spent and spent beyond his means.

“There was a continued need to use the line of credit because of the activity in his bank account,” Grenon testified, identifying a pattern in Duffy’s spending between 2008 and 2013. “There was a requirement to borrow . . . in order to fund the spending of that month.”

That line of credit rose and fell and rose—at one point, soaring to more than $100,000.

Grenon pointed out four large payments Duffy made to reduce the balance on his line of credit over these years. He made two payments following the two times he remortgaged his home in Kanata, Ont., another after his mother died and he sold her home in Charlottetown, the last after transferring money from his business, Mike Duffy Media Services Inc.

This financial tail-chasing tends to demonstrate an ongoing requirement for money, which could prove useful in establishing motive for Duffy’s alleged fraud and breach of trust.

It remains an open question where Duffy, who, for years, made good money as a television journalist, managed to spend all his dough.

Court broke this afternoon after Grenon showed how his analysis of Duffy’s Royal Bank account between 2009 and 2012 led to his identifying a series of dollar amounts, totalling $159,477.43, not reflected in Duffy’s tax returns. Grenon referred to these as “the missing piece of the puzzle.” He was careful to point out that some forms of income are not taxable (inheritances, for example), and that these amounts represent unknowns in his analysis—portions of money he cannot explain.

“Senator Duffy could,” defence lawyer Donald Bayne said, piping up just at this point. It was an unusual outburst. It felt like a promise.

And yet these mysterious bundles of money may also leave room for the sorts of payments that tend to land people in court. It’s worth remembering, at this point, that Duffy is charged with 31 counts of bribery, breach of trust and fraud.

Not that any of this is easy to understand.

“I put puzzle pieces together,” Grenon explained, at Crown prosecutor Jason Neubauer’s prompting, and the whole exercise of reconstructing Duffy’s finances looked like nothing less than a giant, multi-layered, multi-dimensional sudoku.

Neubauer, leading Grenon through examination-in-chief, flipped through phonebook-sized compendiums of figures, a dizzying display of accounting, of Grenon’s feats of mathematics, and of the work investigators have lavished on this case.

Grenon worked his way through the $1.2 million in deposits made to Duffy’s personal bank account between 2008 and 2013—as well as credit card records, the Senate American Express card, Senate financial records, and Duffy’s diaries. Grenon followed money in and out of a multiplicity of such landing spots, shaking them out to their most granular level.

One of those deposits, referred to in direct terms today by Grenon, was the famous cheque Nigel Wright wrote out to Duffy—for $90,172.24. (Grenon joked that he does not round numbers.) Wright and his cheque are now coming up in these proceedings with increasing regularity, an indication that our trial is finally approaching the home stretch.

Bayne fought savagely this morning to keep this material from entering the public domain, and he predicted the Crown would use Grenon’s expert findings to lay the basis for motive in their fraud and breach of trust case against his client.

Bayne called the Crown’s use of Grenon’s voluminous reports a “dump-truck approach” to evidence, and it appeared very much on Bayne’s mind that reporters in the courtroom were terribly eager to chronicle Duffy’s finances. So much so, that Bayne seemed to want Justice Charles Vaillancourt to look at the evidence privately, off the giant TV screens.

And Bayne pointed out also that Grenon is a Public Works and Government Services Canada civil servant, and that he wrote his reports in conjunction with the RCMP probe of Duffy.

The suggestion here is that Grenon is not impartial.

Bayne warned that the Crown would seek to drag what he referred to as Grenon’s “innuendo” about Duffy’s unaccounted-for money before the court, and he suggested that these blind spots in Duffy’s finances are a consequence of Grenon’s receiving an incomplete record. As things stand, Grenon’s material is, Bayne said more than once, “highly prejudicial.”

In one surreal moment, Bayne made mention of a Supreme Court decision related to the meaning of the teardrop tattoo in street gangs, a ruling that bears on the appropriate use of expert testimony like Grenon’s. Bayne lost his gambit—and, with that, prosecutors began their numerological assault on the courtroom. It continues tomorrow.