The Green Party after Elizabeth May

Under the right leadership, the party might have accomplished so much more in the last election. It has a chance to right itself, if it's not already too late. 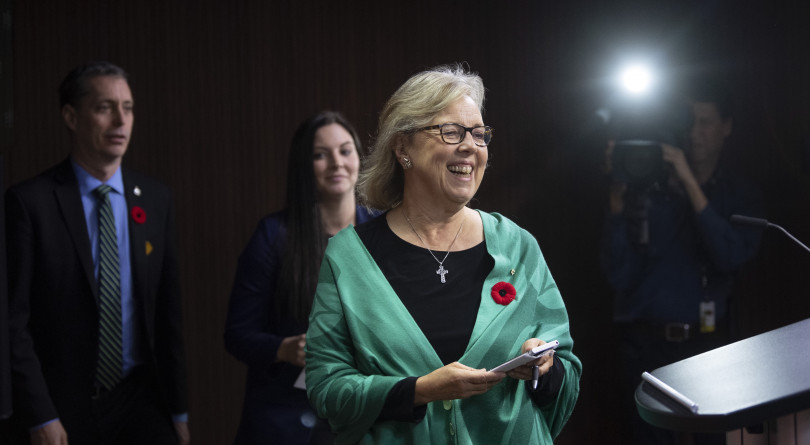 May announces she will step down as Green leader in Ottawa on Nov. 4, 2019 (THE CANADIAN PRESS/Adrian Wyld)

I have spent nearly a decade calling, very occasionally, for Elizabeth May to stop leading the Green Party. She has never shown any sign of holding it against me. She’s one of the most consistently congenial and respectful Members of Parliament, reliably giving out better treatment than she receives, a walking rebuke to the cheap incivility of the national capital.

She has given the Green Party a great gift by finally agreeing to let somebody else lead it. It may come too late.

To consider what’s possible for the Green Party, imagine what might already have happened if a national ecologist party had been led by an adaptable, new-media-savvy leader in the election campaign that ended last month. Imagine a leader who had built the party into a platform for a reasonable number of nationally-known spokespeople on major issue portfolios—foreign affairs, finances, transportation, national defence.

Imagine a mid-campaign visit by the teenaged climate action activist Greta Thunberg that wouldn’t seem unintentionally marginalizing to Canada’s national ecologist party, because that party had a leader who could put Thunberg’s visit into a Canadian context in ways that were persuasive to the millions of voters who spent the autumn shopping around for a party that expressed their hopes. While we’re shooting for the moon, imagine a party with a vigorous presence on 30 college and university campuses, one that could make a case for itself as the natural home of environmentally-conscious young voters and activists.

That party isn’t Elizabeth May’s Green Party. For the first several years of her leadership, disaffected party members would chronicle the decline of the Greens as a national party with strong electoral-district associations. Fewer now bother; it’s hard to get motivated to do such work if it has little chance of making a difference. The Greens in recent years have been a national support organization for the re-election of Elizabeth May; their share of the national vote in October reversed a decade-long decline, but still left the party with a lower share of the popular vote than it won in 2008, May’s first election as leader.

It’s pointless to level too much blame at May, now that she’s decided to hand the party off to someone else. Suffice it to say that she doesn’t delegate well and that she won her job at a time when social media was nearly non-existent as a tool of political organization and fundraising.

Can a new leader change that? Maybe. Nothing is guaranteed: the Liberals and NDP will work hard to peel voter support, and maybe even organizational muscle to the extent there is any left, away from the Greens. But note also that some of the most successful recent political performances have been turned in from parties that had been left for dead not long before. Peter C. Newman published a whole book about the end of the Liberal party in 2012, before Justin Trudeau became its leader. The Canadian Alliance was a laughing stock when Stephen Harper became its leader in 2002. He merged it, on advantageous terms, with the Progressive Conservatives and became prime minister four years later.

These results aren’t automatic or guaranteed. But they’re impossible as long as a party does more of what it’s already been doing. The Green Party has an opportunity now to overhaul its operations and message. As the election results made obvious, it also has an obligation to try.