The 'hidden' piece of the Liberal crime bill: police may get to skip court

The omnibus crime bill could give police officers a pass on appearing in court to be cross-examined. To criminal lawyers it's a 'shocking' development. 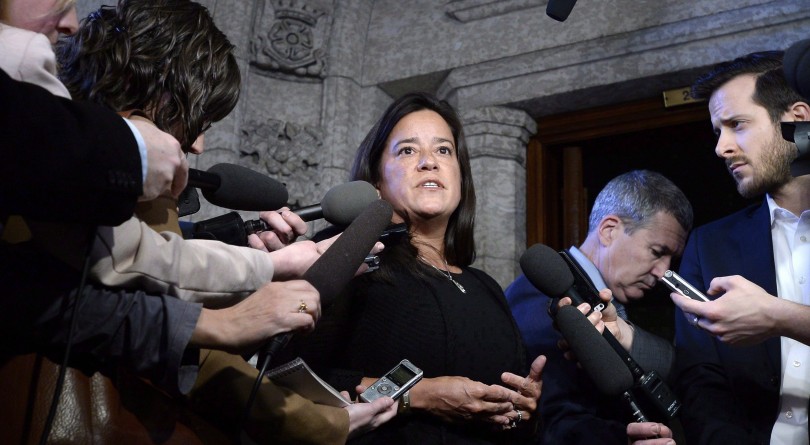 Minister of Justice and Attorney General of Canada Jody Wilson-Raybould speaks to reporters in the Foyer of the House of Commons on Parliament Hill in Ottawa on Feb. 12, 2018. (THE CANADIAN PRESS/Justin Tang)

“I absolutely abhor omnibus bills,” says Tim Quigley, a law professor emeritus at the University of Saskatchewan, “because often tucked away in there are things that nobody really sees, or in the case of Parliament, gets to ask questions on.”

Tucked away in Bill C-75, the new Liberal crime legislation, lies one provision, unmentioned by Justice Minister Jody Wilson-Raybould in her press conference about the bill, overshadowed in public discourse by its other pages, that alters a key part of police accountability in Canada. Section 657 of the Criminal Code would change, under the bill, to give courts the discretion to accept police evidence in writing instead of requiring officers to testify in person. It could mean defence lawyers in some cases can’t question police on the stand.

Critics of the bill have so far focused attention on the two highest profile provisions of C-75, which abolish peremptory challenges for jurors, weeks after the Colten Boushie case, and abolish preliminary inquiries for most types of crimes. (The bill also covers topics ranging from human trafficking to celebrations of polygamous marriage.)

However, on Monday, a week and a half after the legislation was tabled, the Criminal Lawyers Association released a position paper on the bill, including its proposed change to Section 657. While police officers say the provision would save them wasted days waiting around in courtrooms, defence lawyers argue it would prevent them from scrutinizing police investigations, and the provision could pass with little debate in the legislature, tucked in a cranny of the crime bill.

“It was definitely hidden away,” says Lisa Jørgensen, a board member of the Criminal Lawyers Association. “We can’t possibly fathom why anyone would think this would be a good idea … It’s concerning that it wasn’t put forward, front and centre for proper debate.” Along with the abolishment of preliminary inquiries, Jørgensen says, “it’s one of the two biggest changes in the bill.”

The amendment to Section 657 states, “in any proceedings, the court may allow routine police evidence, if otherwise admissible through testimony, to be received either as affidavit or solemn declaration of a police officer and may, on its own motion or at the request of any party, require the attendance of that police officer for the purposes of examination or cross-examination, as the case may be.”

When police officers tell inconsistent stories on different days of testifying, the inconsistency can strengthen the defence’s case. However, under another provision of the bill, police who have already testified in a preliminary inquiry or in a voir dire (a hearing to test the admissibility of evidence) could submit this past testimony as a transcript rather than being questioned about it in court.

“If we don’t have an automatic ability to test the evidence, there are real concerns that judges may, in the interest of time efficiency, not exercise their discretion to permit cross-examination,” says Jørgensen. “That’s how we test evidence in Canada.”

The provision broadly defines “routine police evidence” as evidence including observations, analysis, arrests and “other routine activities.” “That effectively covers everything a police officer could do,” says Scott Reid, a defence lawyer in Toronto. “It’s frankly shocking.”

He compares the bill to past work by the previous Conservative government. “I’m hard-pressed to recollect any piece of criminal law legislation as regressive as this one. They all pale in comparison to this piece of legislation and how bad it is.”

The legislation aims to make the criminal justice system more efficient, after the Supreme Court imposed firm timelines on trials following the 2016 case, R. v. Jordan. David Taylor, a spokesperson for Wilson-Raybould, says judges, when deciding to accept written evidence or not, would consider if the evidence is central to the case and if the accused wants to challenge the evidence.

The Crown would also need to notify the defence of its intention. “So to be clear, there are conditions on whether or not transcripts or affidavits can be entered into evidence,” Taylor writes in an e-mail to Maclean’s. “We are doing this in a way that ensures the accused’s right to make full answer and defence.”

Police officers welcome the changes to Section 657, as they sometimes spend days in court, only to be excused without the need to testify, reducing their numbers on patrol, says Tom Stamatakis, President of the Canadian Police Association.”When I’m tied up in court, that means I’m not doing my job in my community,” he says. “One time in Vancouver, where my home service is, I was tied up in court, and there was a person who went into a local school with a knife, threatening one of the teachers while school was in session, and we had one member in the city of Vancouver in that particular part of the city to respond.”

However, if police officers submit written testimony, they will still need to spend time working with legal council to write their submissions. “I really don’t think there’s going to be any greater efficiency,” says Jørgensen. “Admittedly there will always be some delays inherent in the process, but we don’t require all the officers to sit on the benches for every day of trial.”

Lawyers say they weren’t consulted. “It’s an utter and total failure if this legislation is enacted,” says Michael Lacy, president of the Criminal Lawyers Association. “Having the opportunity to cross-examine police officers … contributes to the full picture emerging and the truth emerging with respect to people’s treatment at the hands of the police,” he says. “I don’t know where that came from, who suggested it.”

The idea didn’t come from the Canadian Police Association, says Stamakasis, though he plans to testify to the justice committee as the bill moves forward. Wilson-Raybould’s spokesman says the Minister, her staff and officials held 16 round-tables and “three additional engagements on specific topics.”

On the Minister not mentioning the changes to Section 657 in her press conference after tabling the bill, Taylor writes, “there was a limited amount of time to highlight the major provisions in a large, technically complicated bill and she thought it important to leave sufficient time to allow media to ask her questions.”