The highs and (many) lows of the Tory leadership race

From Leitch's provocations, to O'Leary's exit, to Bernier's sustained traction, an intriguing contest is coming down to the wire 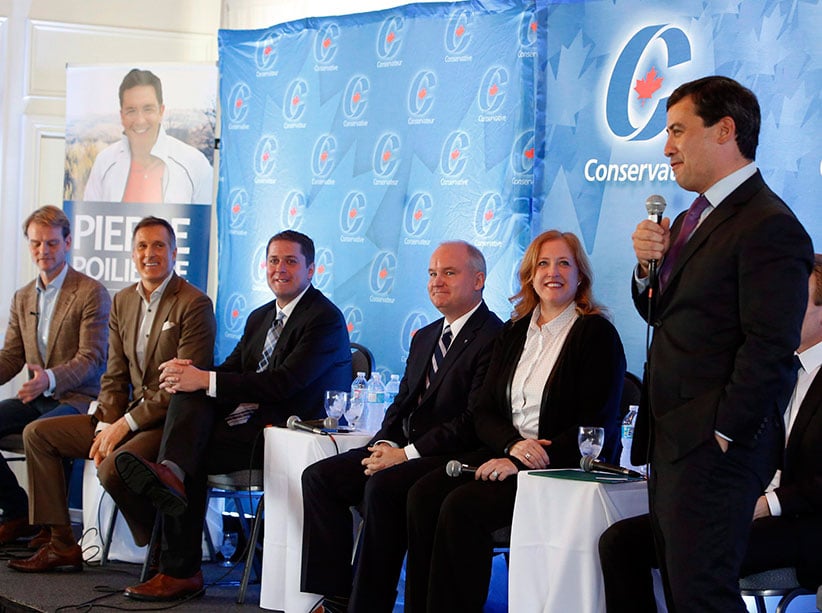 Only three days are left to go before the federal Conservative party finishes counting the votes to pick a new leader and announces the winner at a not-quite-a-convention event in Toronto. For political obsessives trying to sort out what transpired in this often surprising race, here’s a look back at some of our coverage, with links to key stories and columns.

Considering that she wasn’t even running for leader, we found Rona Ambrose an intriguing figure, just off to the side of the main event. In this interview, the interim leader stressed that Conservatives needed to move away from the more caustic edge of identity politics, especially when it comes to security. “I think it’s incumbent on all of us as politicians to be very clear that this isn’t about laying blame at the feet of Muslims writ large,” she said.

But Ambrose generally took care, as she did in this profile, to avoid pointing explicitly at candidate Kellie Leitch‘s polarizing proposal for a value test for newcomers. Ambrose’s scrupulous neutrality contributed to the outpouring that followed her announcement that she will leave federal politics by this coming summer—making her a hard act to follow.

If Ambrose tried not to comment directly about Leitch, for long stretches in the race a lot of other people could talk about little else. So we took a close look at Leitch’s rather vague plan to screen immigrants for “anti-Canadian values” in this story, examining in particular how her stance amplified controversial elements in Stephen Harper‘s failed 2015 election strategy, including his mid-campaign call for an RCMP “barbaric practices” tipline.

But after drawing so much excited attention early on, Leitch’s campaign appeared to lose momentum in the late stages, perhaps reaching a low point with her release of an oddball video, in which her performance was judged by Anne Kingston to be “some awkward pantomime of Margaret Thatcher and a Bible-belt preacher.”

While Leitch’s identity-politics gambit seemed to fizzle, Quebec MP Maxime Bernier‘s low-taxes, small-government pitch just kept gathering steam. In fact, we’ve been interested in Bernier’s outreach to Conservatives hankering for his brand of less-is-more message ever since he took it on the road way back in 2010.

Despite his long, patient efforts to win converts to his libertarian ideas, though, Bernier’s potential to charge to the front of this race was widely underestimated at the start. We charted how he went from comic relief to front runner in this story. However, there remain serious pitfalls in Bernier’s policy prescriptions too, especially surrounding his proposal to get Ottawa out of health care almost entirely.

Of course, Bernier wouldn’t stand alone as the man to beat in the stretch run if reality TV star Kevin O’Leary, his nearest rival, hadn’t surprised Conservatives by dropping out late in the contest. We took close interest in O’Leary, who uses the same New York tailor as Barack Obama, back before he declared his candidacy. Then we went behind the scenes as he assembled his campaign team. We also considered his sometimes eccentric policy ideas.

And, when he finally dropped out, Paul Wells asked what Tories who supported him could possibly have been thinking all along. Still, O’Leary was, at the very least, a distinctive outsider voice and he remains well worth listening to in the top interview of this Maclean’s on the Hill podcast.

Although O’Leary’s scratch left Bernier the odds-on favourite, the outcome remains far from certain. Other candidates in the crowded 13-candidate field tried to distinguish themselves through this final month, which featured all of them, in their different ways, running from Harper’s legacy, according to Wells, who happened to be the preeminent chronicler of the Harper era.

Not every Tory found the debate surrounding the competition to succeed Harper stimulating enough to make them feel good about state of Canadian conservatism. And so, in a string of bars and restaurants, those who  were uninspired by what was on offer congregated to talk with Maclean’s columnist Scott Gilmore, whose “confessions of a self-loathing Tory” piece about what he hates about the party prompted a series of soul-searching get-togethers.

No matter who wins, the race has generated fresh interest in few previously below-the-radar federal MPs—among them, in particular, Saskatchewan MP Andrew Scheer and Ontario MP Erin O’Toole, both of whom look like far more significant figures in the party now than they did before. Then there’s Ontario MP Michael Chong, whose bold stand in favour of a carbon tax made him a constant target of his rivals, and former Ontario MP Chris Alexander, whose bid for political redemption looks to have fallen short.

Why did so many stay in the hunt for so long? We looked at that question in this story, explaining the complex rules and dynamics of the race. Would the Conservatives do it the same way again? The answer will probably depend on how the new leader they choose on Saturday pans out.