The 'incoherent jumble' that is the Liberal housing plan

Justin Ling: Both the NDP and Conservatives are taking seriously the idea that we need many, many new homes. The Liberals are, clearly, not. 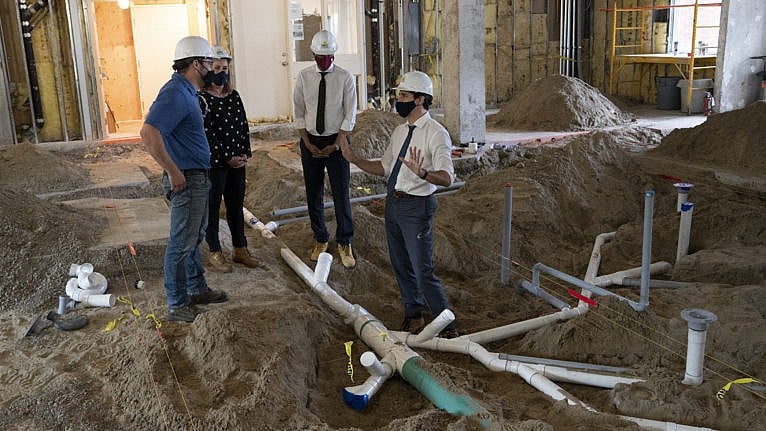 Earlier this month, just days before Justin Trudeau trotted to Rideau Hall to call an election, he received a report card of sorts on his mission to address the housing crisis.

This report, from the Parliamentary Budget Officer, took stock of the Liberals’ much-touted National Housing Strategy and a raft of new measures in their 2021 budget.

In real terms, the report found that critical housing funding for low-income people is declining. Spending on new construction was delayed and less than promised. It reported that, of the $70 billion supposedly being spent, some 40 per cent is via loans and only 30 per cent is actually new money. It found that the plan has, since 2017, built just 63,000 new homes.

The budget watchdog found that, despite this talk of “building back better,” the Trudeau plan would see the number of households in need of better housing increase by 1.8 million in the coming years.

It’s a worrying document. Canada is in an affordability crisis. There are too few homes and too many people looking for a place to live. Rental units are growing harder to come by and are growing more and more expensive. People are being forced to camp in parks because they can’t afford a place to live.

All three parties are talking about this issue as a crisis, and rightly so. From the very beginning of the campaign, both NDP and Conservatives put forward a credible plan to solve it.

Perhaps spooked by their competition, the Liberals released their plan in Hamilton on Tuesday morning. The plan contains a variety of items clearly borrowed from the other two parties. But that doesn’t mean it’s the best of both worlds.

In the end, Jagmeet Singh and Erin O’Toole may understand the problem better than he thinks.

Unquestionably the best way to address a mismatch between the number of available homes and the number of people looking for a place to live is to simply build more homes. On Tuesday, Trudeau promised his government, if re-elected, would “get 1.4 million Canadians in a new home in the next four years.”

That number is bold, ambitious, necessary and misleading to the extreme. You would have to dig into the Liberals’ news release to realize that they’re not promising to build 1.4 million new homes—that number includes units they would “build, preserve, or repair.”

In a policy backgrounder, the Liberals reveal that they are proposing $4 billion in new money to construct 100,000 “middle class” homes in the next four years. They would also double the National Housing Co-investment Fund—which is a curious pledge, as the Parliamentary Budget Officer recently found that the Fund had only spent half of its allocated budget. To date, the Fund has built just 12,400 new homes.

The Liberal plan also proposes to “Convert empty office space into housing by doubling our existing commitment to $600 million.” The word “commitment” is doing a lot of work there: The Liberals first proposed this office space conversion plan in their 2021 budget. So they’re doubling down on a plan they unveiled in April, which hasn’t been implemented yet, begging the question: If $600 million is the right number, why didn’t they propose it four months ago?

A charitable read of the Liberals plan suggests that these new measures would add 150,000 new homes to the market in the next five years.

Rob Gillezeau, assistant professor of economics at the University of Victoria and a former NDP wonk, puts it less charitably. “The Liberal housing plan is an incoherent jumble that unsuccessfully looks to one up their opponents in every dimension,” Gillezeau told me.

The Conservatives, meanwhile, are proposing an interesting mix of government-focused projects and private development.

O’Toole’s party wants to release 15 per cent of federally-owned buildings into the housing market, to offer developers a break on their capital gains taxes if they reinvest profit into rental properties, to allow companies to donate land to non-profit trusts in order to build affordable housing, and to partner with Indigenous nations to build new developments (something that is paying dividends in Vancouver.)

The major piece, however, is around transit: The Conservatives want to fund transit projects that connect to growing housing markets, and to require that cities increase the density around transit projects if they want federal cash. While it will depend on how it is actually implemented (building transit to far-flung suburbs is a waste of money) it has the potential to make much better use of land in major cities that is, currently, zoned for single-family and semi-detached homes.

O’Toole expects the plan would build one million new homes in Canada in the next three years.

Gillezeau gives the Tories high marks, telling me that O’Toole’s plan has “recognized the scale of the housing affordability crisis and their platform dramatically shifts their approach to housing. They have put forward an offer that boosts private sector housing supply, reduces demand and avoids many of the most common housing policy pitfalls.”

The NDP takes the Liberal approach and supercharges it to meet the realities of the market. It is pledging to fund 500,000 units of affordable housing in the next decade, half that in five years. It would also kick in “fast-start funds” to help communities build their own housing projects, and waive the federal 5 per cent sales tax on construction of affordable rental units.

While it’s always easier to craft a plan when you’re in opposition, both the NDP and Conservatives are taking seriously the idea that we need many, many new homes. The Liberals are, clearly, not. And it’s not hard to figure out why: Flooding the market with homes will mean prices of existing homes stop increasing so rapidly. That’s bad news if you banked your future on permanent housing price growth.

Increasing supply only makes a difference if you can temper an increase in demand. Not every leader has been willing to do that.

Trudeau, for example, has supercharged the First-Time Home Buyer’s Tax Credit: A measure advertised to help would-be buyers enter a hot market. In practise, however, it is a subsidy for inflated housing prices. Any economist will tell you that subsidizing a scarce good is a great way to further increase prices: Worsening the problem it professes to address.

As Gillezeau notes, “measures to boost demand from first-time buyers are inconsistent with the overall goal” of improving affordability across the board.

Even if the NDP and Conservatives’ housing plans are generally more ambitious, they fall into many of the same problems of ginning up demand. The NDP would look to provide cash relief to renters, and expand federally-backed mortgage terms to 30 years. The Tories would look to expand seven-to-10 year mortgages and loosen stress test rules.

These measures might be wise in a healthy market. But, if introduced into a hot market, they could lead to Canadians purchasing more investment properties, heightened speculation, and increased prices. That would require even more supply in the market.

This is not by accident. All three parties, but the Liberals in particular, are trying to appeal to middle class voters who have enjoyed an unprecedented, even exponential, increase in the value of their home in recent decades and who have little interest in seeing that growth plateau or even decline.

But enabling that continued inflation to placate an already well-to-do voting block is a dangerous proposition. It could create the conditions for a housing bubble, and bring this entire market tumbling down upon itself.

The Liberals are pitching some smart measures that could cool price growth, including a proposed ban on “blind bidding”—where prospective home-buyers need to submit their offers without knowing the bids already made, which has encouraged buyers to pay significantly above the asking price.

That’s a part of their Home Buyers’ Bill of Rights, which would also expand transparency elsewhere in the home-buying market. It’s a good set of ideas, although it’s unclear how any of it is federal jurisdiction.

Investment, both foreign and domestic

One longtime housing policy bugbear has been the scourge of foreign ownership.

Vancouver, in particular, has fretted that investors from China and further afield have been responsible for a tight housing market, by buying up properties and leaving them vacant. The concern was so acute that it introduced a 15 per cent foreign-buyers tax in 2016 to curb overseas demand.

Five years on, the data shows that cracking down on foreigners isn’t quite the silver bullet some had hoped.

After the tax came in, foreign purchasing fell drastically in Vancouver. Prices, however, didn’t. One study from the University of Victoria found that home prices dipped by about one per cent after the tax was implemented—but that “this effect does not persist over time, but rather has a larger initial effect that disappears within 7 months.”

It’s worth noting how, relatively speaking, minor foreign ownership of housing is in Canada. Statistics Canada found that non-resident home ownership in British Columbia, Ontario, and Nova Scotia sat between 2 and 4 per cent. What’s more, those numbers are stable.

While foreign buying can include speculation, which is something that needs to be significantly reduced; and can contribute to money-laundering, it is clearly not the core driver of the housing crisis.

The NDP would implement a national 20 percent foreign home-buyers tax. The Liberals, meanwhile, are proposing an absolutely unhinged plan to ban all new foreign ownership of housing in Canada outright, for two years. (That might not even be legal.)

The most serious proposal comes from the Conservatives, who would “ban foreign investors not living in or moving to Canada from buying homes here for a two year period,” but—in a recognition that foreign investment can be a good thing—would also ”encourage foreign investment in purpose-built rental housing that is affordable to Canadians.”

So who’s got the best plan?

In short, the NDP plan is pitching the level of investment necessary to address the crisis.

The Conservatives are proposing a thoughtful and detailed way to correct the market more broadly and incentivize supply from the private sector.

And the Liberals are running on an absolutely abysmal record, augmented by a Frankenstein’s monster of a policy book that reads like a pale facsimile of their competitors’ ideas—one that seems intent on worsening the crisis, not fixing it.