The Indigenous vote was huge. Now, so are the expectations.

With many Indigenous voters newly engaged, Justin Trudeau risks looking hypocritical if he follows in the footsteps of previous Liberal leaders 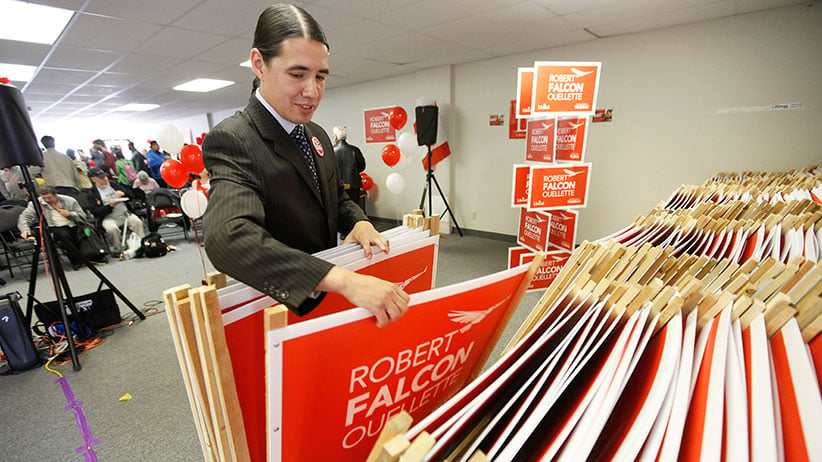 Robert-Falcon Ouellette, one of 10 Indigenous MPs elected to government. (Photograph by John Woods)

In the final weeks of the federal election campaign, Tania Cameron took an unpaid leave from work to devote herself full-time to getting out the Indigenous vote in the sprawling, northwest Ontario riding of Kenora. Her mom, Brenda Beardy, acted as an unofficial driver and Ojibwa translator, helping with webcasts, YouTube videos and call-in radio shows.

The Conservative government’s “Un-Fair Elections Act,” as Cameron renamed it, created new burdens for on-reserve voters this fall. Proof of residency can be tricky when a utility bill has a single name for a house with six eligible voters. Cameron, a councillor with the Dalles First Nation, helped voters get registered, find the right ID or get proof-of-residence documents. The 41-year-old mother of three once ran for the NDP, but her recent registration effort was non-partisan: “I didn’t care who people voted for, so long as they voted.”

In the end, the First Nations vote rose 69 per cent in Kenora. In the remote community of Pikangikum, north of Red Lake, it jumped 273 per cent.  On Onigaming, near Dalles First Nation, four polling stations briefly ran out of ballots. “I think the sentiment, from the elders right down to the young people, is: ‘We’ve got to get rid of Harper. Conditions are so dire.’ ”

Indeed, fully 26 of the Kenora riding’s 40 First Nations live under boil-water “advisories.” On the Neskantaga First Nation, where a boil-water warning has been in place for 20 years, dirty water is blamed for a host of illnesses, sores and rashes; its Oji-Cree residents bathe their babies using diaper wipes. The riding’s problems are not unique. But neither was the enthusiasm of its Indigenous electorate, which helped the Liberals, who are promising a “renewed nation-to-nation relationship” with the country’s Indigenous peoples, claim another Conservative riding.

The outgoing government—considered callous, antagonistic and indifferent by many First Nations people—“awoke a sleeping giant” in Indigenous voters, says Derek Nepinak, grand chief of the Assembly of Manitoba Chiefs. Across the country, at least nine First Nations communities reported ballot shortages. (Elections Canada confirmed five, and tells Maclean’s these reports were “taken very seriously,” and that “no one was denied the opportunity to vote.”)

The community’s sky-high expectations put the new Liberal government in a “dangerous place,” says Sara Mainville, a laywer and chief of the Couchiching First Nation in northwestern Ontario. “It’s like walking through a minefield.” Incoming prime minister Justin Trudeau, who has a Haida raven tattooed to his bicep, risks looking monstrously hypocritical if he follows in the footsteps of previous Liberal leaders, who tended to forget the lofty promises made to the community once in office. Trudeau is promising $2.6 billion in new funding for on-reserve schooling, to deliver clean water to every reserve community within five years and to provide funding for the construction of Freedom Road to Shoal Lake 40 in Manitoba. He’s also pledged to implement the Truth and Reconciliation Commission’s 94 recommendations and give First Nations a veto over development in their territories. In his first address to media, Trudeau reiterated his pledge to hold an inquiry into the issue of missing and murdered Indigenous women.

Lalita Bharadwaj, a toxicologist and associate professor of public health at the University of Saskatchewan, told Maclean’s that the five-year window for clean water is “not realistic.” Despite billions spent in the past decade, no “quantifiable progress” has been made delivering clean drinking water to reserves. And some of the TRC’s recommendations are outside federal purview (including having the Pope apologize for residential schools). 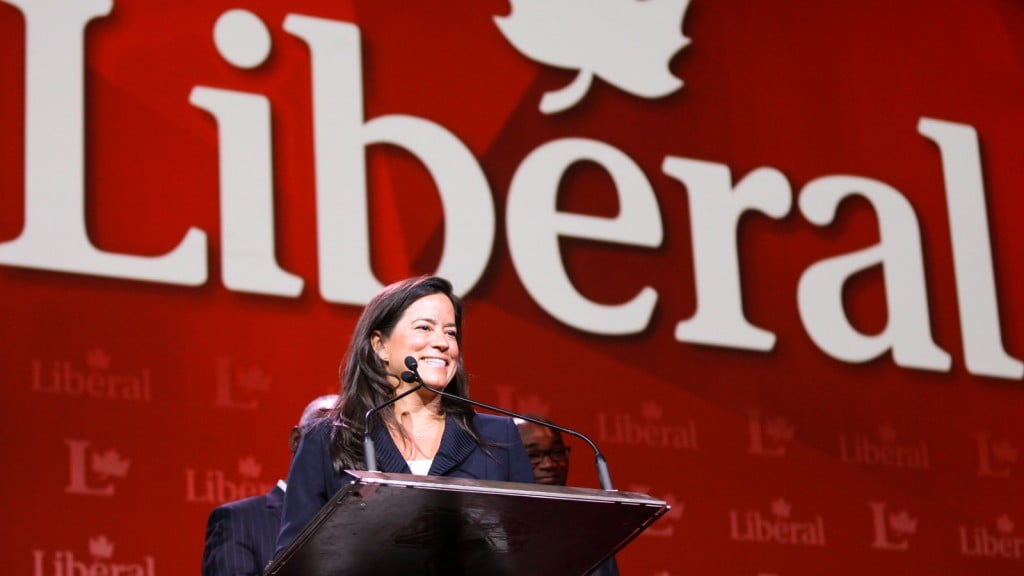 But “expectations should be high,” says Jody Wilson-Raybould, who took the new riding of Vancouver–Granville for the Liberals. “Our country needs to be dealing with these issues in a substantive way. They’re some of the most pressing issues we face. Mr. Trudeau recognizes that something needs to be done, that we need to take a huge step forward.” Wilson-Raybould, 44, a former prosecutor and former regional chief of the B.C. Assembly of First Nations, is considered a cabinet lock, and could potentially become the country’s first Aboriginal minister of Aboriginal Affairs. The We Wai Kai national is the daughter of influential B.C. chief and activist Bill Wilson.

Wilson-Raybould remembers being dragged to political meetings, growing up. “Sit there, listen,” her dad would tell her. “That’s how you’ll learn.” Her father is credited with convincing Pierre Trudeau to recognize Aboriginal and treaty rights and once, during an argument, told the elder Trudeau that young Jody might one day be prime minister. (Wilson was also provocative, and once said it was “a stupid mistake” for coastal First Nations to have accepted European colonizers, whom he characterized, not incorrectly, as “homely, smelly and diseased.”)

Wilson-Raybould also credits her teacher mom—who once sent her to the principal’s office for acting out when she was in her Grade 3 class—and her grandmother Puugladee for showing her how to lead. It was Puugladee who gave her the name Puglaas, or “woman born to noble people,” at a Gilford Island naming potlatch when she was 8. It’s now also her Twitter handle.

Party insiders say she speaks her mind; and she was among those First Nations leaders to describe last year’s Supreme Court ruling in Tsilhqot’in as a “game changer” for its potential impact on Indigenous land rights.

If the new Liberal government truly is as committed to righting this relationship as Wilson-Raybould suggests, it could become apparent as early as November. A deeply symbolic first move would be renaming the federal ministry of Aboriginal and northern affairs, replacing the dated term “Aboriginal,” considered offensive by some, with “Indigenous,” a more neutral catch-all, which includes all First Nations, Inuit and Metis inhabitants of Canada. Trudeau could also appoint one of his eight Indigenous MPs to head the newly minted ministry.

The election of 10 Indigenous MPs (two are NDP) also provides Trudeau the opportunity to support the formation of a cross-party Indigenous caucus, not unlike the U.S. Congressional black caucus, which could pool resources to help promote equity. Both Wilson-Raybould and another Liberal rookie, Robert-Falcon Ouellette support it.

Ouellette took Winnipeg Centre, an urban riding with a significant Indigenous population, which saw a 26 per cent jump in voter turnout in this election. That helped Ouellette, a Cree Ph.D. with formidable retail skills, knock off NDP incumbent Pat Martin, who’s had a lock on the gritty, urban riding since 1997. Ouellette was deliberately targeting Indigenous and new voters, believing he could win if he was able to boost turnout by seven per cent, a strategy laughed off by political veterans. “Look who’s laughing now,” he told Maclean’s this week, with a chuckle.

Trudeau could also follow the lead of Rachel Notley. In June, in one of her first acts as Alberta premier, she asked each of her ministers to formulate a detailed plan outlining the ways their ministry would nurture and protect the province’s Indigenous communities, part of a broader effort to improve relations.

None of these initiatives would be particularly costly, but would signal a desire to rebuild Canada’s relationship with the descendants of its first inhabitants.

One of them, Ouellette, is now representing the riding where he spent time “couch surfing” as a boy with his mom, who struggled to put him and his brother through school. But for Ouellette, 38, the election’s greatest moment was watching his 88-year-old grandmother react to the win. Both his parents are dead. His grandma “remembers the family’s really tough times.” On election night, shortly before midnight, it dawned on her, he says: Someone in her family was going to be sitting in Parliament. “She just shook her head. She never believed it was possible.”

By then, Ouellette’s kids were asleep. He’s got five; the youngest, 3, came to the family through the foster care system. His wife, Catherine Cantin, who he met in his teens when they were both cadets, was in tears. They’d been “super nervous,” he admits. The longtime NDP riding was considered “untakeable,” and he’d quit his job at the University of Manitoba to campaign full-time, putting his family under tremendous strain.