The Interview: Roméo Dallaire on peace, child soldiers and retirement

The retired senator has many plans for his non-retirement 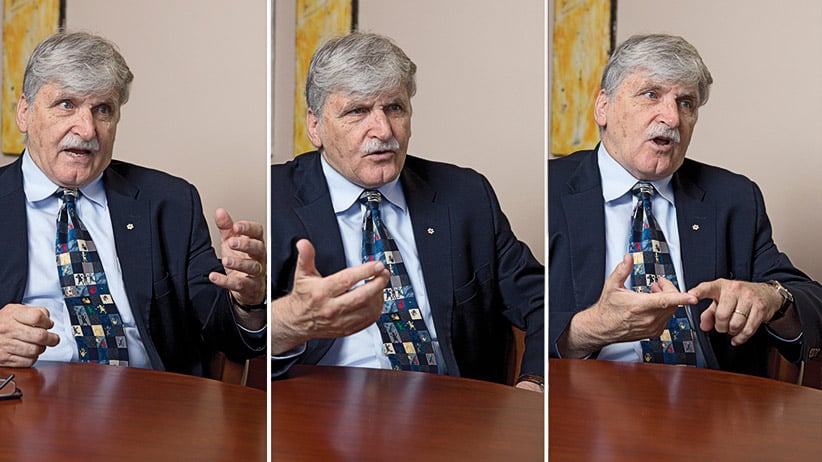 Roméo Dallaire came to world attention as commander of a tragically under-resourced United Nations mission in Rwanda when genocidal violence broke out there in 1994. Since then, Dallaire has devoted himself to causes related to violent conflict, especially in Africa. He was appointed to the Senate as a Liberal in 2005, and retired this past May.

Q: In your final speech in the Senate you spoke of how, for people like you, news of war in far-off places always brings back vivid memories. “We still smell it,” you said. And you admonished, “What goes on in these conflict zones is not foreign and should never be foreign to a great nation like ours.” But isn’t it inevitable that most Canadians feel Syria, say, or the Central African Republic are foreign, distant, and not much connected with life here?

A: You’re articulating exactly the natural reaction. You do that when another town has a problem. A company town closes down, your company is still there, and you say, “That’s life.” The question is: Is that the depth of Canadians—your own self-preservation? You carry on, and to hell with them? In this nation, over 150 years, we’ve been able to move that argument higher. We’ve been moved beyond our borders because we’ve bled beyond our borders. It is easy to have people think beyond self-preservation because the essence of a Canadian is there. It’s a matter of reminding them and providing some leadership.

Q: You’ve urged Canada and other countries to be more ready to try to bring peace in places torn apart by conflicts. Doesn’t history give us grounds to be cautious about that?

A: I think caution is being responsible. Leaders have to be cautious about assessing risk. But caution isn’t the excuse for sitting on your ass and doing nothing. Inaction is an action. [It] is a deliberate decision.

Journalist Paula Todd on the psychology of online abusers

Q: You argue that Canada, as a middle power, has a role to play, especially in developing countries where the former colonial powers carry a lot of negative baggage. You also argue we need to be backed by real military strength.

A: Lester B. Pearson argued that you needed a robust military capability to back up the diplomatic capabilities and, ultimately, economic ones. It was never just: “We’re going to be peacekeepers, we’re going to be good guys.” He believed you needed a solid military, because in extremis you will have to use them.

Q: You’re concerned these days about the Central African Republic, where bloodshed involving Christian militias and Muslim rebel groups has been horrific. The UN Security Council has established a peacekeeping operation that is to be up and running there in mid-September. What role would you see for Canada?

A: Canada should have a battle group of about 1,600 with a helicopter capability to be able to move at least a company at a time. It should have engineering capability and extensive logistics and command-and-control capability. We can be the backbone of that UN force.

Q: But nothing like that is going to happen, right? I assume that’s a reaction to what has been experienced in Rwanda, Somalia …

A: There was, running through the Department of National Defence headquarters, [the idea that] “We don’t want to do a ‘Dallaire’ anymore.” But not wanting to do a “Dallaire”meant not sending a general with a couple of staff officers into a mission where we should have sent a general with a battalion, which I asked for and never got. So there is a firm belief that if we’re going in anywhere we must put our capability on the ground. And I totally agree. There’s also still nurtured in National Defence this NATO-itis: “Oh, we don’t like how the UN builds mandates and builds its force and command-and-control and strategic planning. But we do like NATO. So if NATO’s called in, we’ll look at it.”

Q: It’s interesting to hear you putting so much emphasis on the troops. We’ve come to think of you as a humanitarian figure.

A: I believe the security side has got to be handled. My involvement with child soldiers is not because I believe it’s a social and economic problem. My interest is because it is a security problem. This is a weapons system that is being used massively. My aim is to neutralize that system.

A: Twelve-year-old boys and girls—40 per cent are girls. Child soldiers don’t just include the boys standing there with the AK-47s and machetes. It includes those in the camps preparing food. It includes sex slaves and bush wives. For example, we’re seeing abductions in Nigeria. They’re doing forcible recruitment, indoctrinating and drugging up those kids, and they are going to be using them.

A: It’s called the Roméo Dallaire Child Soldier Initiative, based at Dalhousie University. We do research and training for military and police forces on how they can neutralize the use of children. How do you prevent them from being recruited? We’re with military and police in the field showing them how to make children a liability to the adults who want to use them. We’ve got a program with Sierra Leone. We’ve already trained contingents going into Somalia. We’re involved with Uganda, we’re in the Congo. The Mali force commander has asked us to go into his country. We’ve been in Botswana.

Q: What else do you have on the go now that you’re leaving the Senate?

A: My wife is expecting that response, too.

Q: We’re glad to forward this interview to her.

A: She’d appreciate that. While I was a senator, I averaged four days a month at home.

Q: Where is home?

A: Quebec City. My father-in-law commanded the garrison there, my father served in the garrison there, my son serves in the garrison there. I’m a romantic and I like the history of the fortress city. In any case, my primary work will be out of Dalhousie. We’ve been asked by police forces in Canada to look at how they handle ethnic-based gangs. I’m on the advisory board to the UN secretary-general on genocide prevention. The high commissioner for human rights out of Geneva has asked me to be prepared to deploy.

Q: They want you to go into conflict zones to assess possible crimes against humanity.

A: Yeah. So investigate or participate in whatever resolution is possible. You can see all that’s linked together. My research on a new conceptual framework of conflict resolution has been long in the making. And the veterans ﬁles—I’m still continuing [work on] strategic issues. Reforming the New Veterans Charter. Reforming care for the severely injured. Creating a covenant between the people of Canada and the veterans.

Q: You’ve talked openly about how you cope daily with post-traumatic stress disorder. Will you be able to do all the stuff you’ve talked about?

A: I take my pills every day and I still do therapy, because I do get, at times, overwhelmed, for a variety of reasons. Fatigue is one. Not being able to sleep because of intrusions still. PTSD can be terminal, so I gotta watch it, I gotta take care of it. That’s what it is. It’s an injury I’m living with.

A: It’s a memoir. All kinds of people want to write my biography and I didn’t want anybody [doing that]. So my editor and I, we sat down and I said, “Why don’t I write a memoir of 20 years with PTSD.” It won’t be a cry-in-your-beer kind of thing. It’ll be about how you manoeuvre. I think it will be useful.

Q: Coming back to your conviction that Canada should be more active in peacekeeping in the world’s hot spots, if I’m a Canadian who thinks, “The general has his heart in the right place, but I don’t want Canadian troops dying in a jungle or a desert somewhere,” what do you say to that?

A: How long have [UN peacekeepers] been in Cyprus? Sixty years. They are not killing each other there anymore. We’re still patrolling this line in between them, and the way it’s going, it might take another generation, another 20 years. What’s 70 years in the life of a nation—if they are not killing each other, they’re building a future. So Afghanistan, the former Yugoslavia, Rwanda, Sierra Leone—nations that are in tumultuous scenarios—you need to invest in giving them the ability to nurture their future. Those of us who have the capacity should be [helping] economically, development-wise, but we should also be willing to do it security-wise.

Q: You’re saying that we should make very long commitments in these places.

A: It’s dangerous, complex, ambiguous—civil war is hard to define. We went into Afghanistan for 10 years. Who said the mission was going to take 10 years? That bull is still around, particularly here on Parliament Hill: “We need very clear end-dates, very clear objectives, and we want to avoid casualties.” Well, you might as well stay home. Afghanistan needs 40, 50, 60, 70 years of assisting them. You may not have to fight. You’ve got to wear it down. You’ve got to work with them to bring in human rights, gender equality, a bureaucracy, rule of law. I believe we go in, yes, to assist them, where there will be at times a requirement for security. And, just like in this country, where there’s a need for security, there are risks. The day our police in Canada don’t need weapons will be the day we can go help people somewhere and we won’t need soldiers. That means we will spill some blood. But that’s part of building the construct of humanity. I believe that nations that have capabilities will be held accountable in history for not doing it.

FILED UNDER: Romeo Dallaire The Interview