The latest 338Canada projection: The Liberals keep hanging on

Philippe J. Fournier: With the ethics commissioner's report behind them, the regional breakdown this week still gives the Liberals an edge 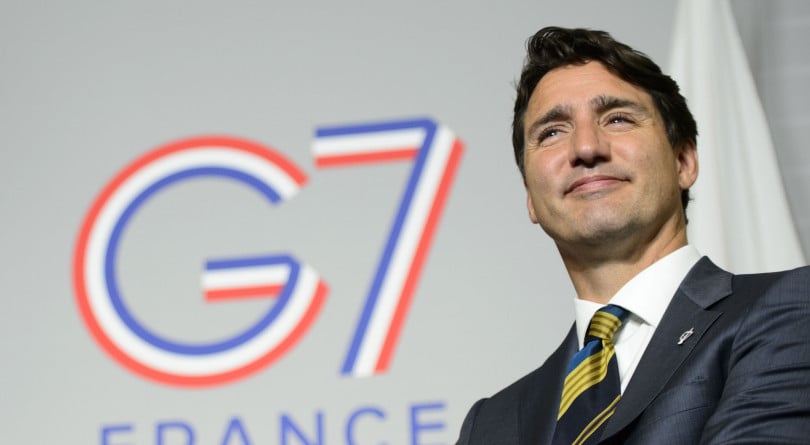 As was expected as soon as the ethics commissioner’s report on the SNC-Lavalin affair was published on Aug. 14, many pollsters hurriedly went on the field to take the pulse of Canadian voters in the days that followed. Since then, a flurry of polls were published by various media outlets (see the complete list of federal polls here). Here is a short recap:

These federal polls have this much in common: all of them were in the field after the release of the ethics commissioner’s report and none of them saw a dent in voting intentions for the Liberals (compared to each firm’s previous poll).

We also add to the model these additional regional polls:

We add these numbers to the 338Canada electoral model and present today this updated federal projection.

The Conservatives remain in first place in the popular vote projection, albeit with an average lead significantly smaller than the model’s uncertainty. The Conservatives sit at an average of 34.4 per cent and the Liberals, 32.7 per cent. Consider the following graph: 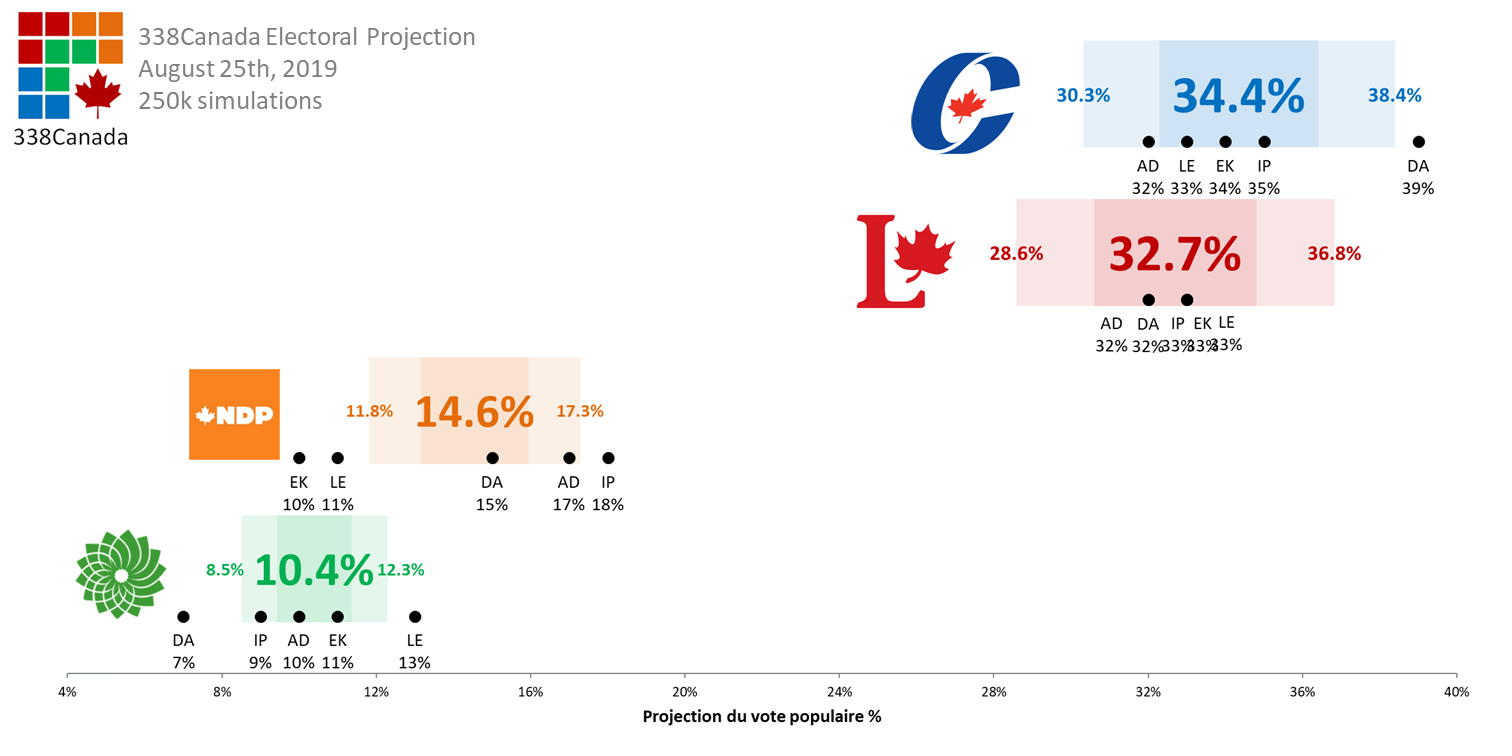 While all five polls gave either 32 or 33 per cent to the Liberals, the spread is considerably wider for the other parties, especially the NDP. Léger and EKOS measured NDP support at 10 and 11 per cent respectively, numbers which would translate into a disastrous seat harvest for leader Jagmeet Singh. On the other hand, Abacus and Ipsos have the NDP at 17 and 18 per cent respectively, just below the NDP’s 2015 result.

Naturally, by breaking down these surveys by their regional and demographic results, we find that each of these polls potentially paints different pictures. By calculating weighted averages and running 250,000 general election simulations, we obtain these seat total averages: 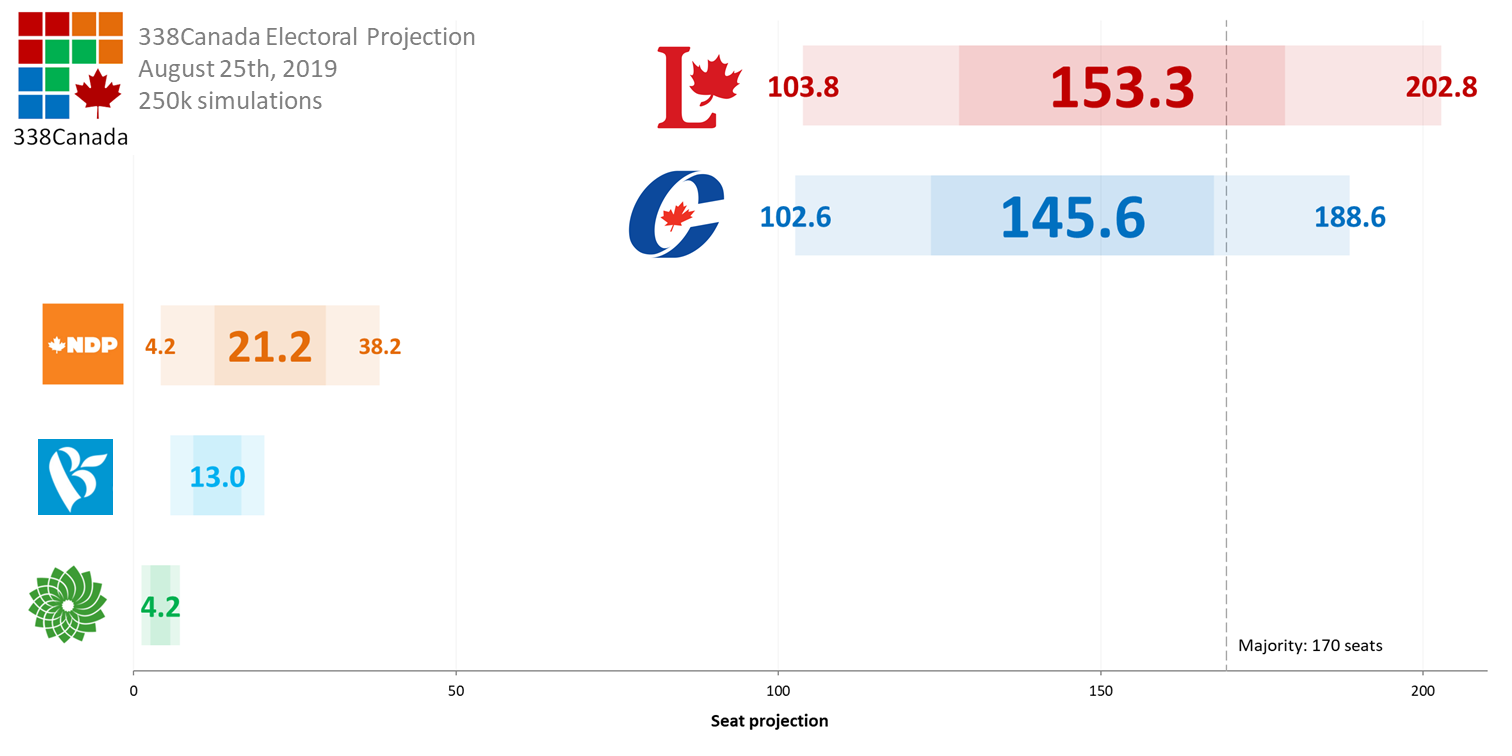 The Liberals win on average 153 seats, 17 seats short of a majority. The Conservatives are not far behind with an average of 146 seats (47 more seats than in 2015). Therefore, the most likely scenario according to these numbers would be a Liberal minority (but not the only plausible scenario as we will see below).

The NDP wins on average 21 seats, less than half its 44-seat total of 2015 under Tom Mulcair. The Bloc québécois wins 13 seats and the Greens, four seats (most likely all located on Vancouver Island).

Even though the Conservatives narrowly lead the vote projection, the regional breakdown still (modestly) favours the Liberals. The LPC wins the most seats in 57 per cent of all simulations, including a majority in 30 per cent of simulations: 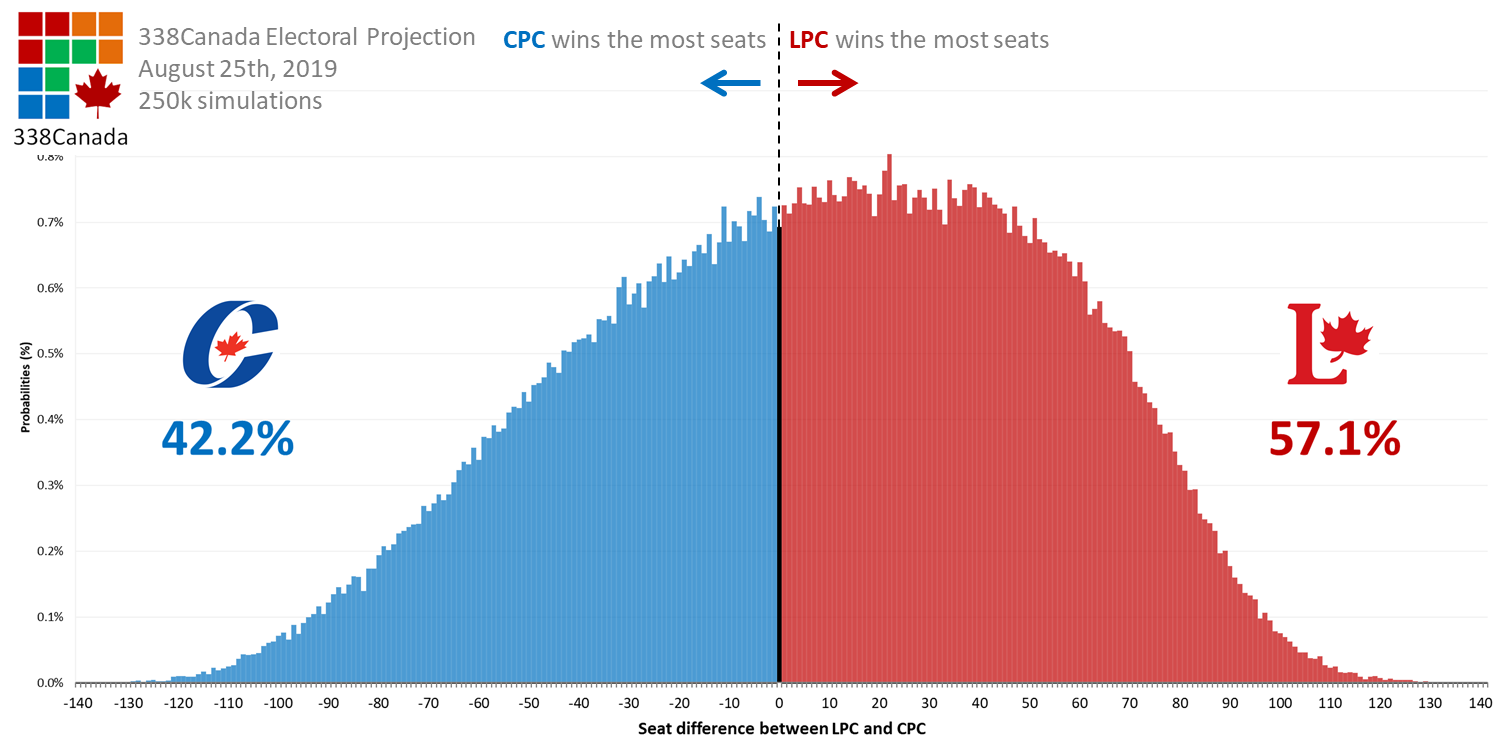 However, current uncertainty and noise in the data translate into wide confidence intervals, and therefore myriad potential results. The Conservatives still win the most seats in 42 per cent of simulations, including 16 per cent odds (i.e. a roll of a dice) of a majority.

Although it may be too early to reach definitive conclusions on the matter, recent polling suggests the ethics commissioner’s report on Justin Trudeau and his handling of the SNC-Lavalin affair has had no direct effect on Canadians’ voting intentions.

Yes, it is early. Yes, it is still summer. But since this story dominated most of Canadian media from the middle of winter until late into spring, perhaps many voters have already made up their minds on where they stand on the issue.

As I wrote earlier this week, we do not yet know what the main ballot box issue will be for the next federal campaign, but, unless new damning revelations are soon unearthed, it may just be that opposition parties will have to return to traditional narratives to attack the Liberals: for the Conservatives, successive Liberal deficits despite economic prosperity; for the NDP and Greens, a lacklustre environmental record?

We shall see which path they choose soon. Only 57 days to go until election day.