Philippe J. Fournier: The Liberals have the edge in the seat projection, but their lead in many ridings is not considered 'safe'. Small swings could have dramatics impacts.

There was plenty of fresh data to analyze this week as we stand only six weeks away from the 43rd federal general election, so let’s recap the past week of polling:

As for the NDP, the latest waves of polls showed the party is going through hard times, but both Nanos (16 per cent) and Abacus Data (17 per cent) measure NDP support somewhat higher than the recent average. Strangely, it’s the NDP level of support on which Canadian pollsters can’t seem to agree on lately. While EKOS’ 7 per cent from two weeks ago seems to have been an outlier, polls in the field in August alone have measured the NDP as low as 11 per cent and as high as 17 per cent. 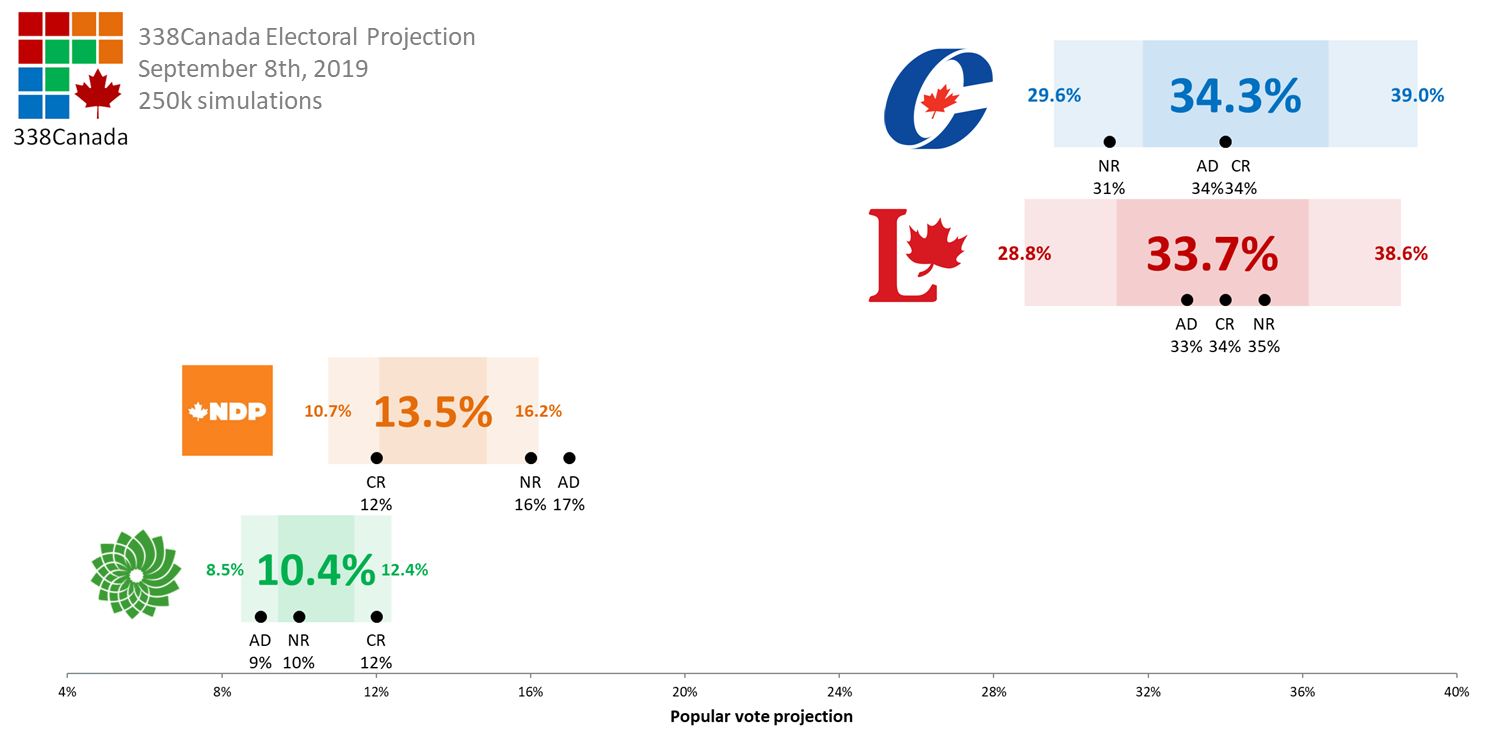 The Conservatives and Liberals remain essentially tied on top of voting intentions with 34 per cent apiece. As we will see below, due to the high concentration of Conservative support in Alberta and Saskatchewan, a tied national vote gives a slight edge to the Liberals seat-wise.

The NDP’s national average stands at 13.5 per cent. The Greens remain stable at 10.4 per cent. Maxime Bernier’s PPC is averaging 2.9 per cent support.

In Quebec, the Bloc québécois gathers 19 per cent of support—a level similar to its 2015 result.

Here are the seat projections in Canada: 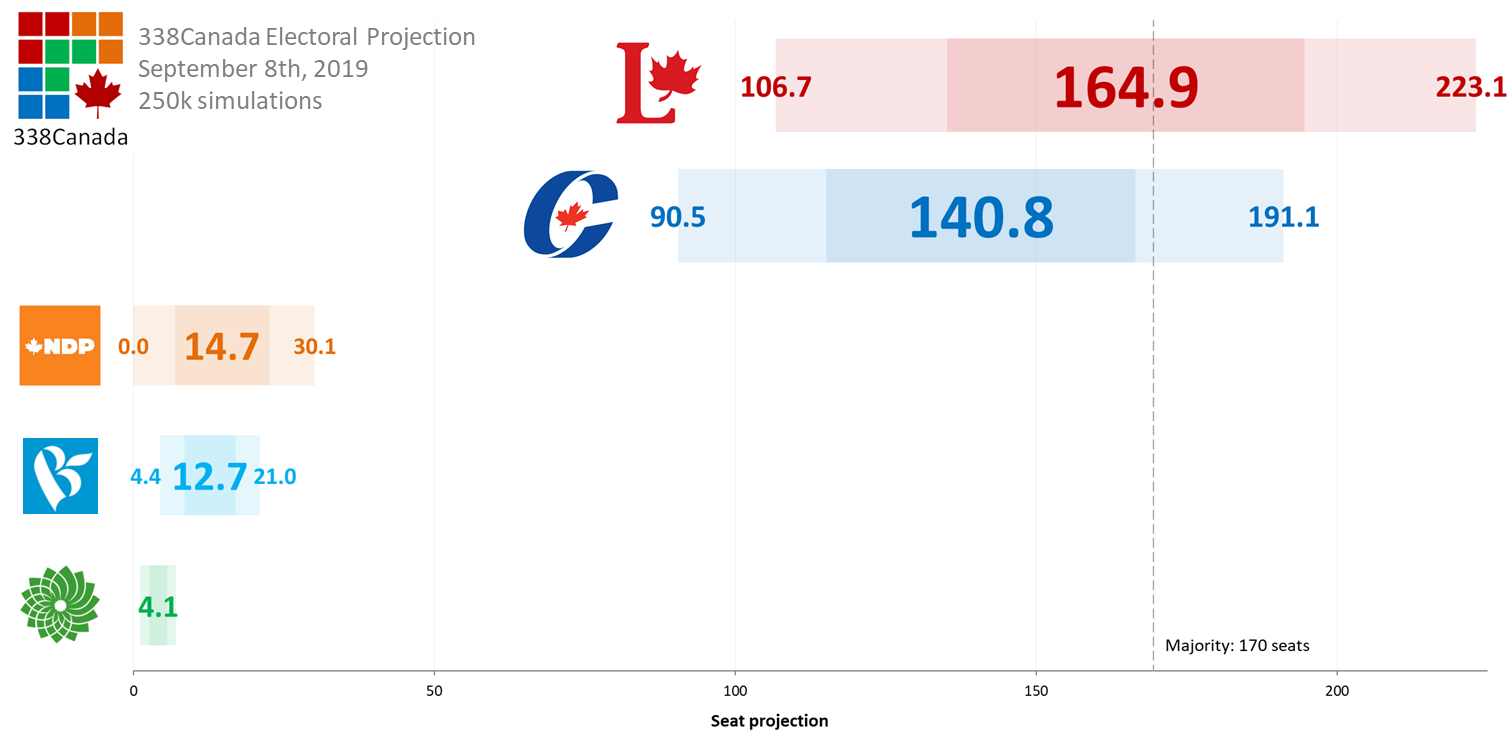 Over the course of 250,000 general election simulations, the Liberal Party wins an average of 165 seats, five seats short of a majority, and 24 seats above the Conservative average of 141 seats.

However, when we analyze the seat projection more closely by breaking down the safe, likely, leaning and toss up projected seats per party, we discover that the Liberal lead is tenuous at best: 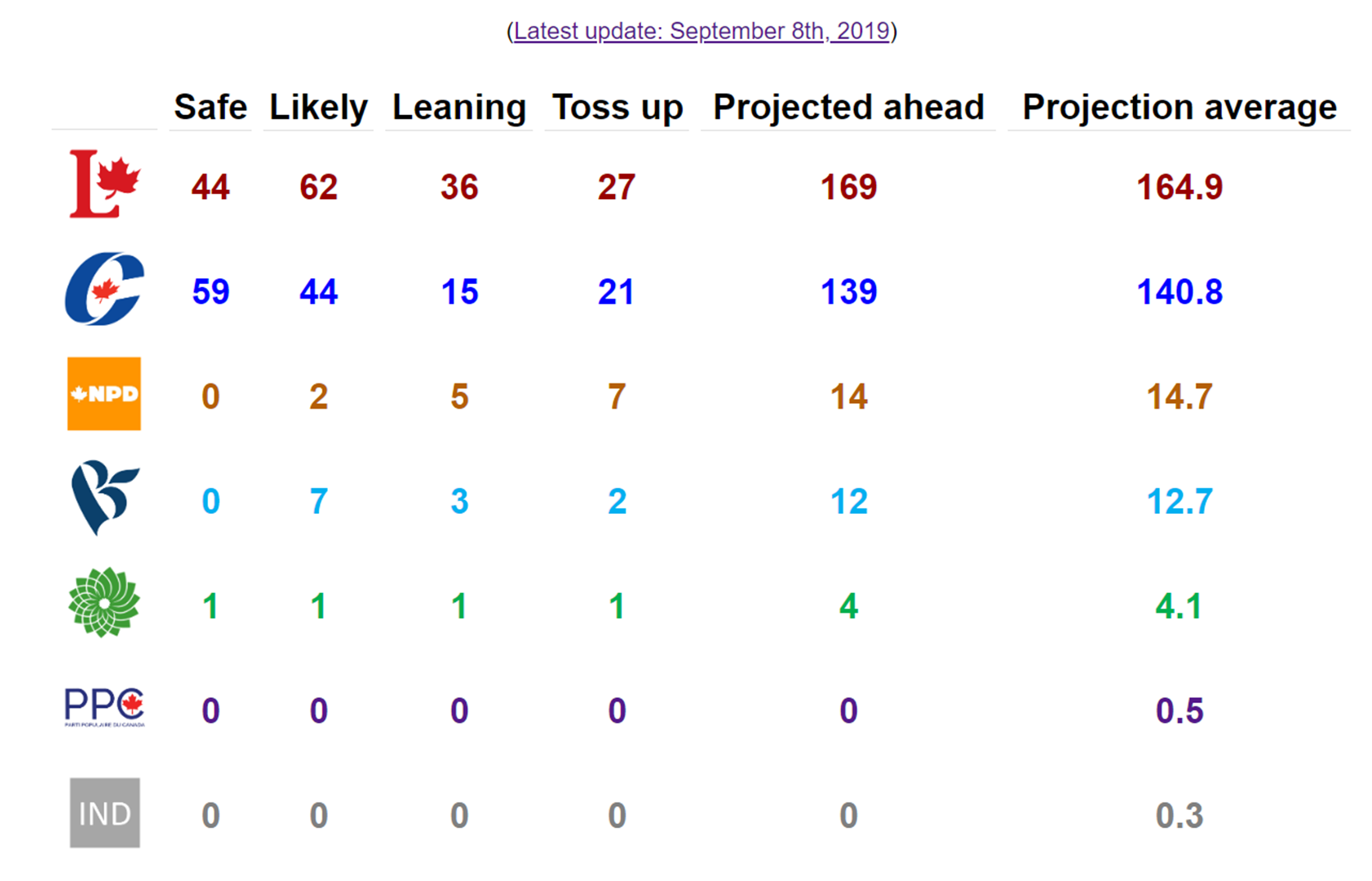 The Liberals are projected leading in 63 districts that are labelled either “leaning” or “toss up”, by far more than any other party. In Quebec, a modest two-to-three point swing to the Bloc or the Conservatives could flip several rural seats in the province. (Léger measured the Liberals at only 29 per cent in Quebec outside of Montreal and Quebec City.) In Ontario, among the 30 GTA districts, more than half are projected leaning or toss ups, including several with the Liberals as current favourites. A moderate slip in the region could also hurt the Liberals and return the edge to the Conservatives.

Nevertheless, with the data that is currently available, the 338Canada electoral model measures that the Liberals are two-to-one favourite to win the most seats: 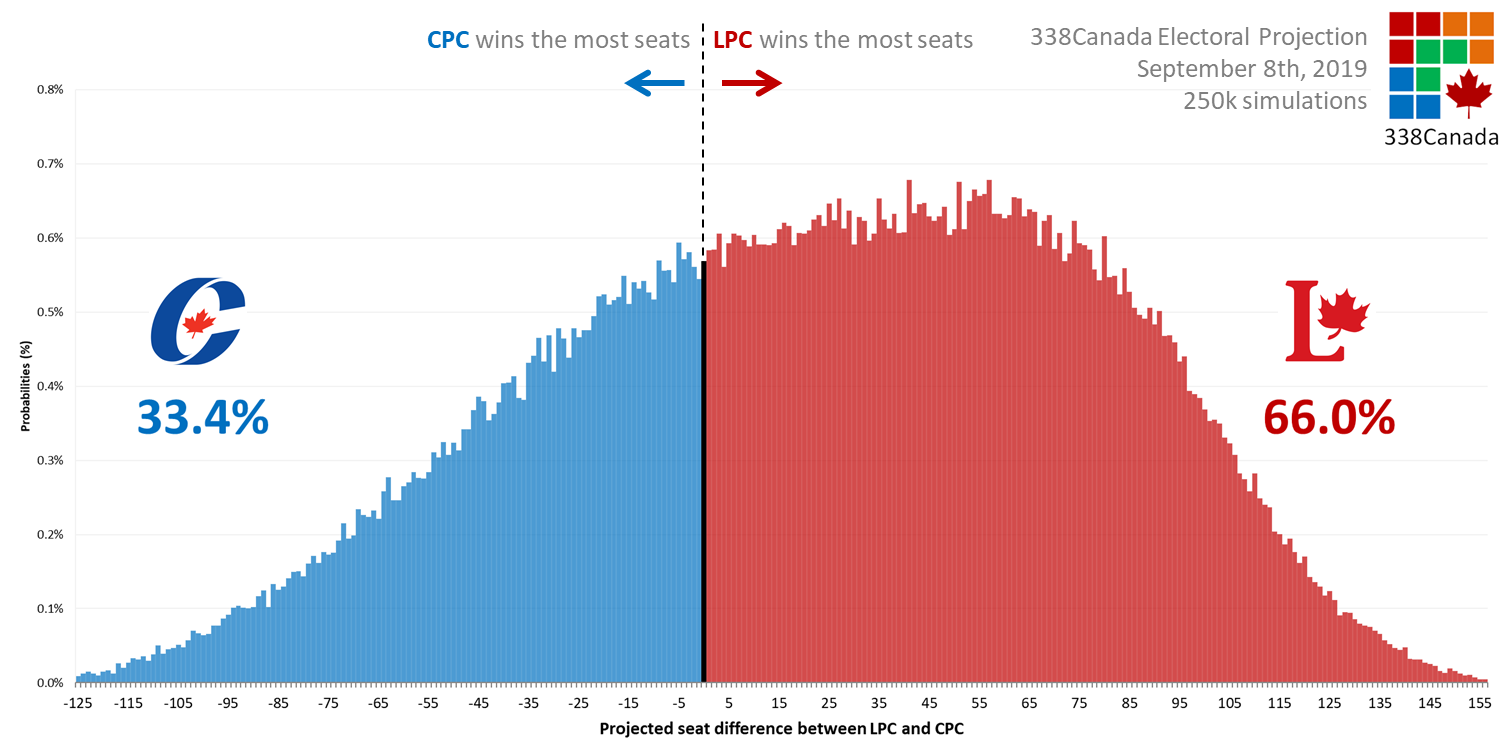 Although it may appear that the Liberals are hands on favourite, consider for a moment what the odds above indicate: Imagine you roll a dice. Numbers one through four mean the Liberals win the most seats. A five or a six means the Conservatives win. That’s how close this race is as of this writing.

(This is the closest race I have covered so far: By comparison, Ford’s Progressive Conservatives and Legault’s CAQ were about 9-to-1 favourites according the same basic electoral model last year. Last April in Alberta, Jason Kenney’s United Conservatives were 25-to-1 favourites.)

With still six weeks to go before Canadians head to the voting booths, the Liberals should not feel any comfort with these numbers. A few scattered points here and there could dramatically alter the seat projection. A single slip-up or mistake could make of break their re-election hopes.