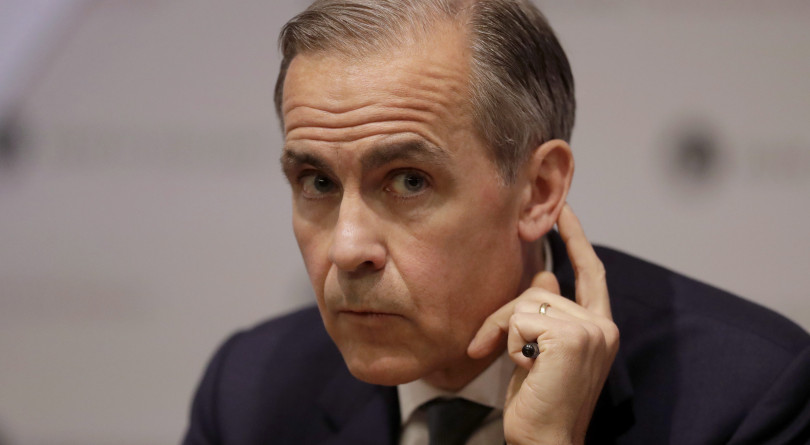 Mark Carney the Governor of the Bank of England (AP Photo/Matt Dunham, Pool)

Shunny ways: How does Prime Minister Mark Carney sound? The next federal election may still be five months away, but some Liberal insiders are already plotting to replace Justin Trudeau if things go badly, and the roving central banker is at the top of their lists, according to the Toronto Star‘s Chantal Hébert. The Prime Minister’s terrible, horrible, no good very bad political spring came up on a conference call of Liberal insiders, as did Carney’s name. Carney, of course, previously served as Canada’s top central banker before heading to London to hold the same job for the United Kingdom. His term as Governor of the Bank of England wraps up at the end of the year—convenient timing in case the Trudeau Liberals implode on Oct. 21. Another name being floated in some Liberal circles: Foreign Affairs Minister Chrystia Freeland. “The eternal quest for the next bright shining leadership object is in the political DNA of the Liberal party,” writes Hébert. “In the past it has sent some of its best and brightest on a quest for what turned out to be fool’s gold.” (Toronto Star)

Broken telephone: Freeland is still getting the get the cold shoulder from her counterpart in China, Wang Yi, over Canada’s arrest of a Chinese telecom exec. Testifying at the House foreign-affairs committee Freeland chalked the silence up to China’s habit of refusing to discuss matters with nations it has disputes with, though Conservative MP Erin O’Toole fired back that this is becoming a recurring theme in Canadian international relations, like when Saudi Arabia froze diplomatic relations with Canada over a human rights tweet and when the Philippines recalled its ambassador over a dispute about garbage. “The world is at a worrying inflection point,” she replied. “We are at a time when authoritarian regimes are on the rise, when liberal democracy is under assault, and when the rules-based international order is under threat … Canada is doing a lot in that environment.” (Canadian Press)

Malaysia vu: Stop us if you’ve heard this one—an Asian nation, fed up with Canada dumping waste on its shores, demands Ottawa make plans to take back its trash. “I think you need to take back your rubbish,” said Malaysia’s environment minister after a container of plastic shopping bags was exported to that country for recycling. This week dozens of containers of rotting trash will depart the Philippines for Canadian waters, with that country’s foreign minister Teodoro Locsin Jr. warning Canada against trying to stop it: “Anybody gets in the way one way or another, I will screw you dry. Don’t provoke me.” (CBC News)

Drink up: The Trudeau government moved to take the fizz out of rumours that the next Liberal platform would include a tax on soda pop. A 20 per cent tax on sugary drinks was being pushed by a group of Ontario MPs, but Health Minister Ginette Petitpas Taylor shut down what was sure to be a contentious topic during the campaign: “We’ve made it clear during the course of the past few years that adding a tax to sugary beverages was not a part of our healthy eating strategy.” (CBC News)

You had one job: Coastal First Nations took aim at Canada’s Senate, blasting those in the unelected Upper House who are trying to change the Trudeau government’s coastal tanker ban legislation. Last week the Senate transport committee recommended the bill not proceed without changes. Nine First Nations penned a joint letter saying they’re used to elected politicians breaking their promises to Indigenous peoples, but the Senate stonewalling takes things to a new level: “But when a group of unelected senators moved recently to overturn a government election pledge banning oil tankers on Canada’s sensitive North Pacific coast, we realized that we had a different kind of fight on our hands. We don’t agree that senators have a democratic mandate, and therefore the legitimacy, to kill this bill.” (iPolitics)

Zuck in a muck: Woe be to Mark Zuckerberg and Facebook’s chief operating officer Sheryl Sandberg if they ever cross north of the 49th. After the pair were no shows at the International Grand Committee on Big Data, Privacy and Democracy, an event hosted by the House information, privacy and ethics committee, the committee issued a summons to the two executives. Should either ever set foot in Canada they are ordered to appear before the ethics committee. If they don’t, they could be held in contempt of parliament. It’s “abhorrent” that they didn’t show up, said committee chair Bob Zimmer. “It needs to be stated: They were invited to appear, and they were expected to appear, and they’re choosing not to.” (Globe and Mail)

Reaching: Conservative leader Andrew Scheer delivered his latest get-to-know-me policy speech, this one on immigration. There weren’t many details on offer, beyond a pledge to end “illegal” border crossing and adjust immigration levels on a year-to-year basis “consistent with what is in Canada’s best interests.” With lines like “there is no room in a peaceful and free country like Canada for intolerance, racism or extremism of any kind” it didn’t seem to leave much room for Liberal attacks, but Immigration Minister Ahmed Hussen went for it anyway, accusing Scheer of embracing “the same sort of extreme right wing anti-immigration rhetoric that has become pervasive among right-wing populist parties around the world.” (National Post, Twitter)