The Liberals go after Erin O'Toole. That was fast. 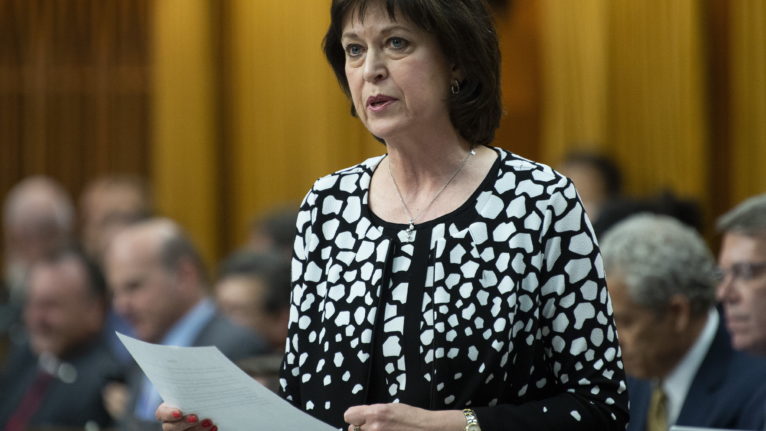 Parliamentary Secretary to the Minister of Health Pam Damoff responds to a question during Question Period in the House of Commons Thursday May 9, 2019 in Ottawa. (Adrian Wyld/CP)

It’s the dead of summer, Parliament is prorogued and Liberals are feisty. Enter Pam Damoff and Navdeep Bains. Damoff, who reps a riding in suburban Oakville, Ont., says Erin O’Toole‘s first order of business as top Tory should be to banish so-con Derek Sloan from the party caucus. Several cabinet ministers retweeted her letter, which claimed O’Toole “pandered to far-right groups” on his path to victory.

Bains, the industry minister who still hasn’t made a final call on Huawei’s ability to build Canada’s 5G infrastructure, was asked by a reporter if he worried that Conservatives would revert to Harper-era science policy. The minister gamely played bogeyman and warned that an O’Toole government “may muzzle scientists.” What’s the old saying about auditioning for the opposition benches? (Bains was announcing new “made-in-Canada” masks and COVID-19 test kits.)

O’Toole also faced reporters who pushed him on just how much influence the social conservative forces that pushed him past Peter MacKay would have on party policy. That included The Abortion Question, which will surely come again. For the record, O’Toole identified as pro-choice in his response.

No surprise there: Leslyn Lewis, the third-place finisher to O’Toole who actually racked up the most raw votes in the second round of balloting, has committed to running for the Tories in the next election. Presumably, Lewis will seek office in a more favourable riding than her last effort in 2015, when she replaced a candidate who literally peed in a mug on camera.

Ben Woodfinden, a political theorist and doctoral student at McGill and commentator on Canadian conservatism, pitched a bold idea to right-leaning politicos in a very 2020 venue—his very own SubStack newsletter. Woodfinden said Conservatives have simply not broken through in la belle province beyond a handful of reliable seats around Quebec City. He argues for a separate, federalist conservative party in Quebec “that could replace the Bloc as the champion of Québec nationalists and capture these culturally conservative nationalist voters.” Tories accepting the notion of a coalition government? That is bold.

The man who drew Canadian politics: In a new biography, political cartoonist Terry Mosher profiles the life and times of Duncan Macpherson, a Maclean’s illustrator in the 1950s. Mosher recounts Macpherson’s efforts to paint the large cross atop Montreal’s Mount Royal for a 1957 Christmas issue. After an aborted attempt to climb a radio transmitter within view of the cross, Macpherson eventually spotted the rooftop of the city’s general hospital.

He was fortunate to find an access point to the roof, and a convenient spot among the vents to sketch a series of cityscapes. During the overnight train ride back to Toronto, he assembled those sketches into a rough layout, and the next morning, returned to his studio to paint the final illustration. When he arrived at Maclean’s with the canvas, the paint was still wet. As always, Macpherson had delivered: on brief and on time.

Foreign Minister François-Philippe Champagne is slowly making his way to Lebanon. Since he was already overseas, Champagne city-hopped around Europe. In Geneva, he met with Peter Maurer and Jagan Chapagain, the respective heads of Red Cross and Red Crescent societies. In Rome, he elbow-bumped his Italian counterpart, Luigi Di Maio. He also got on the phone with French foreign minister Jean-Yves Le Drian.

After Corey Hurren was arrested on the grounds of Rideau Hall, CBC News started digging into Hurren’s unit in the Canadian Rangers—and found that two other members, Erik Myggland and his former spouse, Jodi, were “on the radar” of military counterintelligence after learning of their support for far-right groups including the Three Percenter movement and the Soldiers of Odin.

Over at Global News, Sam Cooper tells the full story of a Chinese military hack on Nortel, the once-mighty Canadian telecom, in 2004. It all starts with a computer in Shanghai that found its way into the email inbox of an Ottawa-based company executive.

The feds teamed up with Alberta to fund 20 infrastructure projects in the province, including a “net-zero aquatic facility” in Drayton Valley that will, in true Canadian fashion recover “waste heat” from a nearby hockey arena. The projects were hailed by local mayor Michael Doerksen, whose LinkedIn profile boasts of a proud achievement: 1996 Canadian Geography Challenge champion for Eldorado Elementary. Your newsletter correspondent is jealous.