The mathematics of majority

I think this is quite the most fascinating thing I’ve come across for a long time. It was brought to my attention by a reader of the Small Dead Animals blog, where a blogger named Marcus Vitruvius (proprietor of the Sagacious Iconoclast) sometimes guest-posts. It’s called Vitruvius’s Experimental Election Predictor, and offers a quick and dirty way of reckoning whether the Tories are likely to win a majority.

The formula is as follows:

where C is the Conservative vote, and L is the Liberal vote. The notion is that the higher the Ve, the greater the likelihood of a Conservative majority. The reasoning is intuitively appealing. As Vitruvius puts it,

In other words, in a two-party system, any margin of victory suffices, no matter how small.

But the greater the number of other parties, and their share of the vote — and the smaller the combined share of the two leading parties — the larger the gap between the two must be to produce a majority: that is, the lower the Tories’ share of the vote, the more they must depend on a Liberal collapse and consequent splitting of the non-Tory vote to put them over the top.

Simple math shows that for any Conservative vote C, the corresponding Liberal vote L needed to generate a Ve of greater than 8 is the square root of (C2 – 800.) For example, if C=30, then L=10. More plausibly, if the Tories were to get, say, 34% of the vote, the Liberal vote would have to fall all the way to a historically unprecedented 19% — a gap of 15 points — for a Conservative majority. (Even then, the 47% of the vote that remained would have to split just right between the NDP, Greens and Bloc Québécois.)

At higher Conservative votes, however, the required Liberal collapse is not so cataclysmic. At 36%, the Tories would need a 14-point margin of victory (36-22). At 38%, the magic number is 13 points (38-25); at 40%, just 12 points (40-28). We’ve seen these sorts of combinations at times in this race — in the first week, and near the end of the third — but only briefly. For the most part, Vitruvius’s formula suggests a Conservative majority has simply not been in the cards.

Oh, and what is the Vitruvius predictor’s current reading? The latest polls have the Conservatives at an average of 34%, to the Liberals’ 27 (as of Oct 4), leaving the Ve at just  4.3 — not nearly enough. Either the Tories have to gain 5 points, or the Liberals have to lose 8. 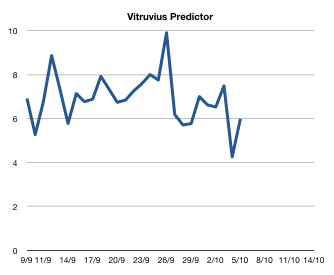 You can see the Tories were inching towards majority territory (Ve=8) as of about last weekend, but that since then it seems to have gotten away from them…

MORER: The Vitruvius Predictor also sheds some light on Tory strategy, notably the heavy reliance on attacks on the Liberals, before and after the writ. That is, it wasn’t enough just to raise their own numbers: given a likely ceiling on Tory support of 40%, they also had to depress Liberal support below 28% to have any chance of a majority. Of course, maybe if the Tories weren’t so nasty they’d have a higher ceiling than 40%. Chicken, meet egg.