Time for an informed debate over policing powers

A sweeping assessment of how Ottawa confronts terrorist threats is overdue, says one observer 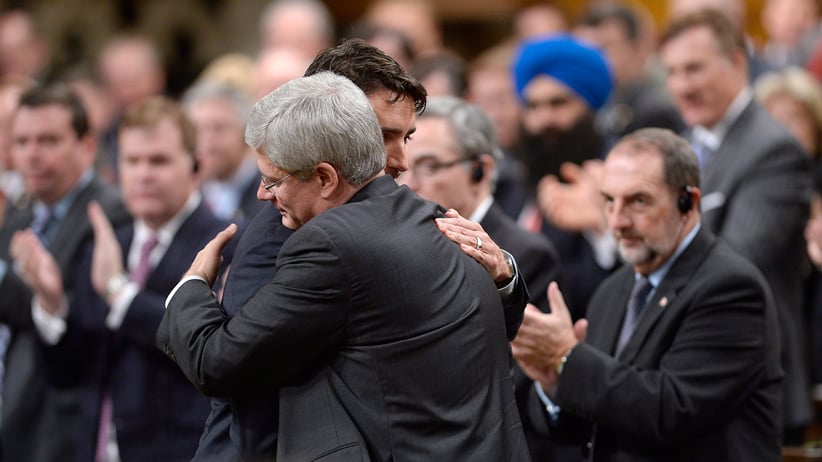 Prime Minister Stephen Harper hugs the leader of the Liberal Party of Canada Justin Trudeau in the House of Commons on Thursday October 23, 2014 in Ottawa. (Adrian Wyld/The Canadian Press)

Sen. Vern White’s story about where he was when gunshots echoed through the Parliament buildings lacks immediacy, but makes up for it in irony. The former chief of the Ottawa police, appointed to the Senate by Prime Minister Stephen Harper in 2007, wasn’t on Parliament Hill the morning of Oct. 22. White was giving a lecture at an Ottawa meeting of police oversight agencies about how police should confront mental illness and radicalization—two closely connected factors that now top the law-enforcement agenda.“I was just finishing with questions and answers when the shooting happened,” White says.

In fact, the questions have only just begun, as Canada, like other Western democracies shaken by so-called “lone wolf” terrorist attacks, searches for answers. White urges patient police outreach to Muslim communities to build relationships that might yield tips about troubled young men who show signs of turning violent. But he’s for strengthening police and intelligence-agency powers, too. That’s where the Harper government is moving quickly. Public Safety Minister Steven Blaney tabled long-planned legislation this week to give the Canadian Security Intelligence Service (CSIS) a clearer mandate to share information on suspected Canadian terrorists with allies, including the U.S. and Britain, and to keep secret sources secret, even from judges during court proceedings.

Further legislation to toughen police anti-terrorism powers is coming soon, and will likely be more controversial than the tweak to CSIS’s clout. For critics who might accuse the government of reacting rashly in the heat of the moment, Blaney had his lines ready. “We will not overreact,” he said in the House, “but it is also time that we stop under-reacting to the great threats against us.” One strong possibility is that he will try to make it easier for police to use existing powers under the Anti-terrorism Act and the Criminal Code. Those powers allow them to arrest someone suspected of plotting a terrorist attack or put restrictions on a suspect’s movements, even when there isn’t sufficient evidence to lay charges.

But University of Ottawa international affairs professor Wesley Wark, a leading national security expert, says those preventive-arrest powers are very rarely useful. “They imagine the circumstance in which security agencies are aware of an imminent plot, but don’t have quite enough evidence to bring charges, and aren’t quite sure how to disrupt it,” Wark says. “The number of occasions in which that exact circumstance occurs is vanishingly small.”

What reforms might be more practical, more often? Blaney wasn’t tipping his hand, only saying that the government will “go further in providing tools to our law-enforcement agencies.” Even police, though, weren’t claiming any new powers would have helped them to prevent Michael Zehaf-Bibeau from killing Cpl. Nathan Cirillo at the National War Memorial, before authorities shot him dead in Parliament’s Centre Block.

At an appearance before a Senate committee this week, RCMP Deputy Commissioner Mike Cabana was asked by White what new legal tools the force needs. Referring to Zehaf-Bibeau, Cabana said: “I’m not sure what kind of tools we would have to have in place to prevent all kinds of incidents like the one we saw last week, especially if the planning behind the incident is just done by one individual with very little collaboration from anybody else.”

Anti-terrorism experts agree that isolated men susceptible to online radicalization by Islamist extremists pose a daunting challenge. Still, they point to promising tactics. Criminology professor Mark Hamm of Indiana State University looked at 98 cases of lone-wolf terrorism in the U.S. from 1940 to 2013, and found virtually all told someone beforehand about their violent inclinations. “Now, if lone wolves announce their intentions, preventative steps can be taken,” Hamm says. “They don’t operate in a social vacuum.”

Connecting with the groups most likely to detect those early danger signals requires meticulous network-building by local police. Before becoming a senator, White worked for years on police forces trying to make inroads in urban neighbourhoods, where not only potential terrorists, but also potential gang members, might be incubated. “How do they turn, usually a young male’s head, toward something the rest of us can’t understand? By finding somebody who has nothing to live for and giving him something to die for,” he says.

White admits police might never reach someone like Zehaf-Bibeau in time to steer him off a violent path, but they have proven they can forge ties to others who will alert them when an individual shows worrying signs of adopting radical views. For instance, the RCMP credits Muslim community sources with providing the tips that allowed them to thwart a plot to attack a Via Rail train last year in Toronto, and a Muslim informant infiltrated the so-called Toronto 18 in 2005.

The Mounties don’t seem comfortable, though, with all outreach efforts. The federal force worked closely with Muslim groups for more than a year in drafting an anti-radicalization handbook, called “United Against Terrorism,” only to withdraw formal support just before the publication was launched last month in Winnipeg. RCMP headquarters released a statement calling the booklet too “adversarial,” but Shahina Siddiqui, executive director of the Islamic Social Services Association of Canada, said the force still hasn’t given her any explanation about what content it found objectionable.

Tensions between Muslim leaders and police and intelligence officials have simmered for years. Back in 2005, CSIS met with Muslim groups in Toronto to try to ease distrust that had grown after the 9/11 attacks. An Islamic cleric said CSIS hadn’t reached out to mosque leaders for help in investigations. “You should have called us,” the imam chided. “You have a phone, too,” a CSIS officer shot back. Despite that sort of friction, experts say there is just no substitute for working to share information in the era of Internet-fuelled radicalization. “Community engagement should be absolutely instrumental in our response,” says Frank Cilluffo, director of George Washington University’s Homeland Security Policy Institute, in Washington.

That sort of long-term groundwork is labour-intensive, and not cheap. So far, complaints about the RCMP and CSIS budgets being squeezed in recent years have been only a low, background hum in the discussion following the recent attacks. That could change. Blaney’s Public Safety department, which funds both the RCMP and CSIS, sustained three years of cuts, starting with the belt-tightening 2012 federal budget. Wark says he and some other independent analysts had argued that security and intelligence should not have been subject to government-wide restraint aimed at balancing the budget, “but nobody was listening to that.”

Beyond rethinking the impact of those cuts, Wark says a sweeping assessment of how Ottawa confronts terrorist threats is overdue. He says a “revolution” in intelligence and police tactics in Canada followed the attacks on New York and Washington on Sept. 11, 2001. “We have changed an enormous amount in resources, legal powers, the roles of our intelligence agencies, the way they interact,” Wark says. “What’s worked, what hasn’t, what still needs to be done? There should be a macro look across the board. If we’re serious about all this, we don’t dive into new legal powers.”

Confidence in the government’s ability to grasp that big picture is perhaps undermined by the now obvious shortcomings in how it handles security around Parliament itself. As Blaney moved on his files, House Speaker Andrew Scheer ordered a full review of Hill security.

Michel Austin, now a senior adviser with the consulting firm Summa Strategies, was chief of staff to former Public Works Minister Rona Ambrose during the last review of Hill security in 2012. Austin says those complicated talks—involving Public Works, separate House and Senate security services, the RCMP and Ottawa police, among others—ended up focusing on keeping cars and trucks from speeding onto the parliamentary grounds from the surrounding streets. “It was supposed to be super-pedestrian-accessible, super-not-accessible for cars,” Austin said. New measures to the stop a lone attacker on foot from running straight into the Parliament buildings, as Zehaf-Bibeau did, now seem inevitable.

Stopping disturbed loners before they reach the point of lashing out is a much tougher challenge. In the immediate aftermath of the Oct. 22 attack, political parties put aside their differences out of respect for Cirillo’s sacrifice and shared shock over how violence had invaded such symbolic national spaces. NDP Leader Thomas Mulcair and Liberal Leader Justin Trudeau even embraced Harper on the floor of the House. But, as the government moves beyond channelling the nation’s distress to boosting police powers, the moment for hugging is over. It’s time for an informed debate over what police powers are really needed to prevent lone attackers, along with more organized terrorists, and what police strategies really work.