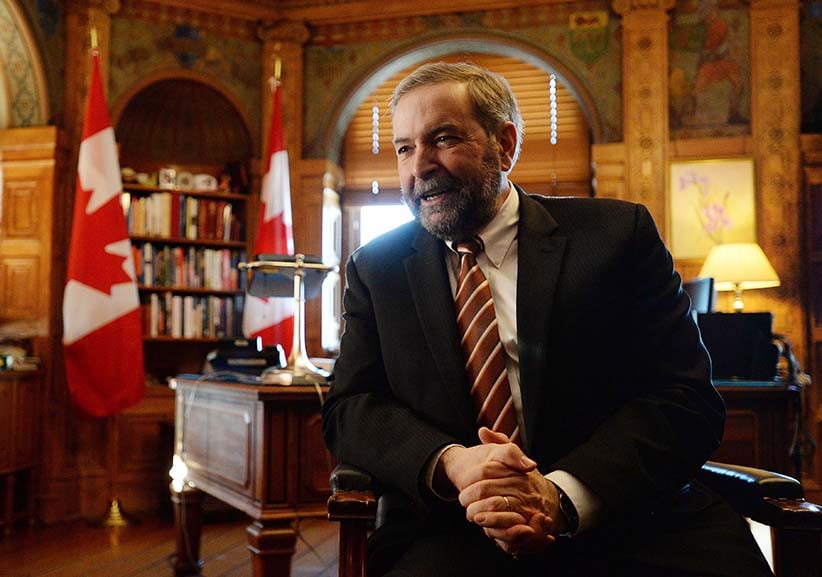 OTTAWA – Tom Mulcair was leaving the national capital, his devastating federal election defeat still stinging, when he realized he wanted to stay on as leader of the NDP.

Mulcair, having just wrapped up a post-election event in Ottawa with defeated colleague and “extraordinary friend” Paul Dewar, was returning to his hometown of Montreal with his deputy chief of staff Chantale Turgeon.

“The very first night that we did in Ottawa with Paul Dewar was the first moment that I felt the hope that continuing was going to produce the result we didn’t have in 2015,” Mulcair said in an interview with The Canadian Press.

“I finished that evening; Chantale was with me, we drove back to Montreal and I said, ‘We are going to continue the fight.'”

Mulcair knew he wasn’t about to make a decision about his political future on election night, but he also knew he would have to face a process of reflection in the aftermath. That, he admitted, was very difficult on a personal level.

“It takes a while to take stock of something like that and to decide what you want to do,” he said.

Rank-and-file New Democrats are still soul-searching as they prepare to gather in Edmonton for the party’s convention next month, where they will decide if Mulcair should stay on as leader.

NDP president Rebecca Blaikie, who has been leading a working group conducting its own election post-mortem, has said Mulcair will need about 70 per cent support from voting delegates to keep his position.

To that end, the NDP leader is trying to persuade party faithful that he can lead them beyond October’s disappointing results, meeting face-to-face with New Democrats across the country.

“We set it up in such a way that I would be touring, listening to the base, taking into account everything that they had been feeling since the election,” said Mulcair, who described the rank-and-file perspectives as “oxygen” for him.

The meetings have put him in small rooms where he can better connect with ordinary party members — something he admits he didn’t have much chance to do when the party was the official Opposition.

Mulcair said he intends to stay in contact with the people he’s been meeting, adding the grassroots will carry the party forward after the convention.

“I’ve been … picking up the phone and phoning people ahead of visits as I’ve gone across the country, ahead of Edmonton,” he said. “Talking to people that I’ve met, talking to people from different ridings … That’s given me energy.”

The NDP leader also appears to have more physical energy — he said he has been hitting the pool five times a week and seems focused on eating well.

Mulcair said he has been invigorated by meeting people who remind him of why he is passionate about fighting for ordinary folks who face uphill battles.

“As I’ve been carrying this forward, I look at the types of things we continue to fight for. It is not just enough to just say, ‘Let’s make this a fairer society where everybody gets a chance,'” he said.

“Government has to play an active role in levelling the playing field … you can’t just affirm it.”

Mulcair described how, while working recently on a provincial byelection campaign in Calgary, he was confronted by a man named Sully fearful of a poverty-stricken retirement after a lifetime working as a chef.

“You know, there are these moments in your political career where you just sort of go, ‘That’s why we fight,'” he said.

“It’s for this guy, to make sure there is a decent retirement for Sully and the Sullys of this world. He is going to live in poverty because the deck is stacked against him.”