The design for the Memorial to the Victims of Communism. (Handout/Studio ABSTRAKT)

If construction proceeds according to plan, two angular concrete monuments will rise to the west of Parliament Hill by this autumn. The government is erecting a Memorial to the Victims of Communism next to the Supreme Court of Canada, on a coveted site previously set aside for a new federal court building. Only a few minutes walk further west, facing the Canadian War Museum, a National Holocaust Monument is to be built on what is now an open field near the Ottawa River.

The two projects have the potential to dramatically change how tourists experience the capital. On Parliament Hill, bronze statues of political greats have long encouraged reflection on Canadian political history, while the iconic National War Memorial and war museum add a dimension of military history. But the two new additions will inject the darkest chapters of 20th-century world history into the mix—and leave permanent reminders of the historical preoccupations of Stephen Harper’s government.

Of the two, the Victims of Communism Memorial is by far the more controversial. The international design team’s winning concept features a series of rising concrete rows, the highest 14.5 m tall, spread over 5,000 sq. m. The government has committed $3 million to the project, while a private group is raising millions more. But some leading architects and urban planners protest this use for one of the few prime sites left near Parliament. “That’s a choice piece of property that should be reserved for a federal building,” said Paul Bedford, Toronto’s former chief planner. “It’s as simple as that.”

If it’s so simple, though, why weren’t the Conservatives advised against putting the memorial there? The logical source of such advice would have been the National Capital Commission’s advisory committee on planning, design and realty, a group of experts from across the country appointed to guide land use in the capital region. Bedford sits on the committee, and says it was asked to comment only on possible memorial designs, not the location. “It started from the top: Here’s the site, no arguments,” he said. Even though the committee wasn’t asked, Bedford said its members were “all together” in viewing the site as “totally inappropriate.” (The worthiness of the memorial idea, he stressed, “wasn’t even in question.”)

Bedford is a major figure in urban planning, but far from the only significant voice raised against putting the memorial between the Supreme Court of Canada’s building and the main Library and Archives Canada building. The Ottawa Citizen has reported on the letter of protest written last summer by Barry Padolsky, a noted architect and expert on heritage buildings in the capital, and, more recently, about the objections of Shirley Blumberg, a founding partner of the prestigious Toronto firm KPMB Architects, and a member of the seven-person jury that evaluated short-listed designs for the new memorial. John Abel, who retired seven years ago as the NCC’s director of design and land use, echoed the positions of Padolsky and Blumberg in an interview. “It seems a very significant underuse of that site,” Abel told Maclean’s. “I mean there are many locations where one could place memorials.” 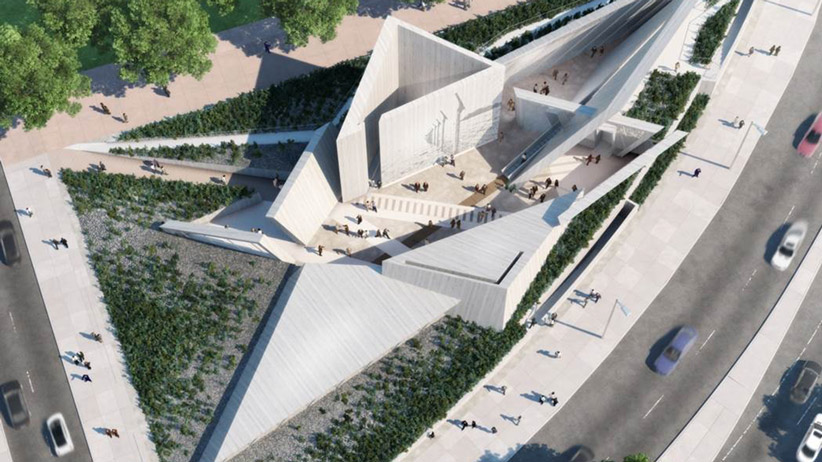 The advisory committee on which Bedford serves is chaired by Larry Beasley, Vancouver’s retired director of planning, and arguably the biggest star in Canadian urban planning circles. Beasley is now a University of British Columbia professor, and heads an international consulting firm. (He was not available to comment when the version of this article that appears in the print edition of Maclean’s was being written, but has responded by email to questions for this updated online version.) Not only did Beasley confirm that his advisory committee concluded that “the chosen site was not a good site, and that it was needed for a higher priority government purpose over the next few years,” he added that, beyond the location issue, the committee didn’t like the winning design, by ABSTRAKT Studio Architecture of Toronto.  “We did not vote on the actual design, but the selected one was not the one the majority of our group preferred, as advisers on the urban design aspects only,” Beasley said.

Asked why the government ignored or rejected the advice of Beasley’s committee, particularly on the site for the memorial, a spokesman for the Department of Canadian Heritage said in an email: “The National Capital Commission’s role in this project is not to advise or approve a location but to oversee the design competition.” That description of the NCC’s function seems more limited than is suggested by the commission’s own website, where the role of Beasley’s committee is described as providing advice on “long-range plans and policies for the use of public lands and properties in Canada’s Capital Region; design proposals affecting these federal lands; [and] real property matters.”

The future court building previously slotted for the contested site was to have been named after Pierre Elliott Trudeau—hardly a mark in its favour for the Conservatives. Soon after the election of the Harper government in 2006, the memorial alternative gained powerful political backers, particularly Employment Minister Jason Kenney, who also spearheads Harper’s political outreach to ethnic communities. Tribute to Liberty, the private group formed in 2008 to support the memorial, is led by Canadians who immigrated from former communist countries in Eastern Europe, as well as Asia, communities Kenney has tirelessly courted.

The Holocaust Monument site, a short walk west beyond the built-up Parliament Hill area, has attracted no significant criticism. Both Bedford and Abel said this site—next to the Canadian War Museum in an open area slated for major new development—is far more suitable than the location for the Victims of Communism memorial. Still, its ultimate popularity is not guaranteed. The monument is expected to cost $8.5 million, with Ottawa matching up to $4 million in private donations. The design calls for six slanting triangular concrete segments, suggesting a broken Star of David, enclosing a space big enough for 1,000 people to gather. Its key designer is Daniel Libeskind, the Polish-American architect, perhaps best known to Canadians for his jutting addition to Toronto’s Royal Ontario Museum, called the “Crystal,” which opened to mixed reviews in 2007, and has not proven to be a conspicuous hit with the public.

With Canadian Heritage saying that “major elements” of both monuments are slated to be largely completed by fall, this highly visible aspect of Harper’s legacy seems assured no matter who wins this year’s federal election. The verdict that matters most will be rendered by visitors, when they decide whether or not to add two sombre stops to the must-see circuit of Ottawa landmarks.