The most-edited Wikipedia pages from House of Commons IP addresses

Who's editing what from Canadian government computers?

By now you may have heard of @gccaedits, the Twitter bot that tweets each time an anonymous user makes an edit from a Canadian government IP address. While providing almost daily amusement for more than 5,000 followers, the account has already sparked an in-House investigation into revisions made to MP Dean Del Mastro’s page. The bot, however, has only been in operation for a few months and doesn’t dive into the full history of edits from Canadian government computers. So, we did.

A search into the Wikipedia revisions made by users on the range of IP addresses associated with just the House of Commons reveals 3,939 total edits from 2004 to Aug. 21 of this year. This number does not include users who have an account on the site. (Wikipedia only attributes changes to an IP address when an editor isn’t logged in. If an editor has a login, then the changes will be attributed to their registered username, rather than the IP address.)

What did we find? Along with additions to the plot of Clueless, the removal of attempts to smear Stockwell Day, and an affectionate tribute to Vic Toews’s moustache, there were questionable deletions, insults and a Star Trek super fan.

Here are the top 10 most-edited Wikipedia articles from within the House of Commons. Remember, hundreds of people have access to these computers, from MPs and their staff to librarians, journalists and even the public. 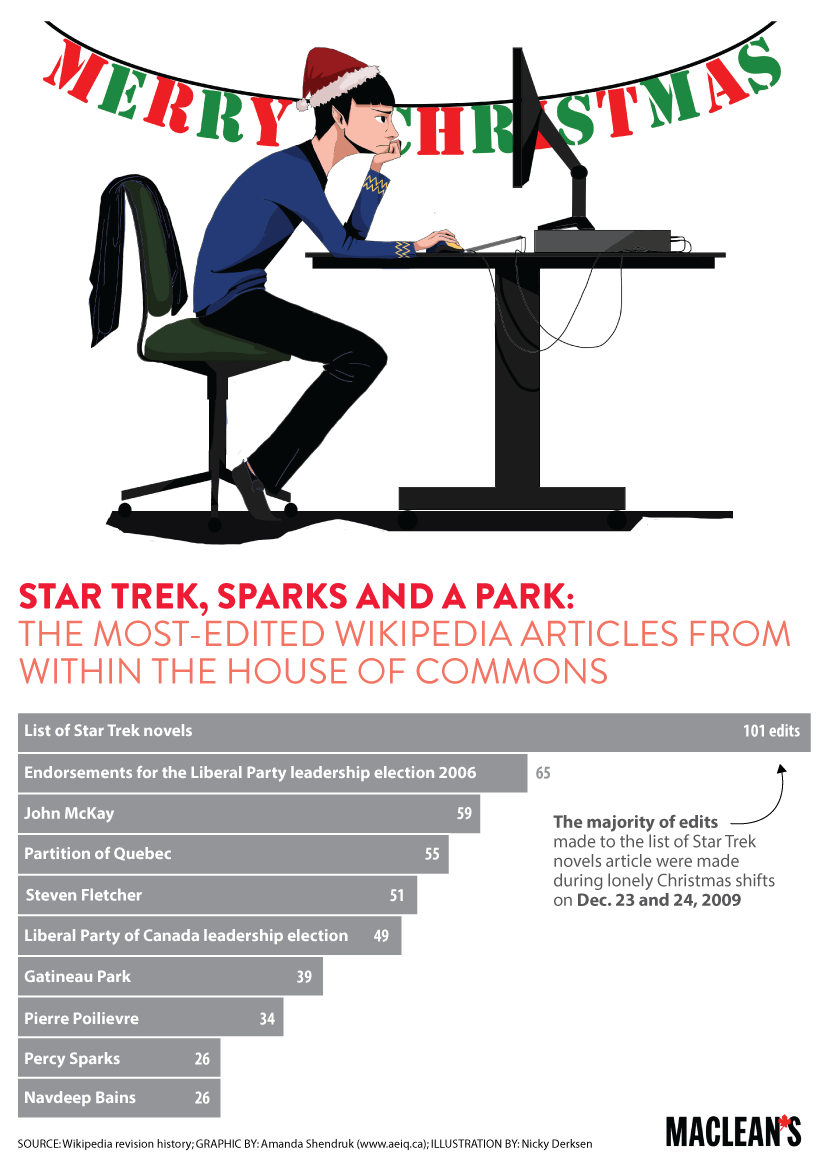 Many of the edits in these top articles were simply grammar or spelling corrections, but some are significantly more substantial. Topping the list at 101 revisions is the Wikipedia article List of Star Trek Novels. On a lonely Christmas Eve shift in 2009, an anonymous user made the majority of more than 100 edits to the page (and that doesn’t count an additional five edits to the Leonard Nimoy article).

The page for MP Steven Fletcher has also seen a lot of action, most certainly from a supporter on the Hill. The page itself was almost entirely written from inside Parliament’s walls (as was MP John McKay’s), and revisions include the addition of awards and accolades, justification for past actions, the removal of controversial commentary, and at least 12 attempts to either eliminate or downplay involvement in a student newspaper controversy.

Fletcher fans weren’t the only parliamentary Wikipedians trying to hide information. The page for former MP Navdeep Bains is 10th on the list of the most-edited articles and at least nine of the 26 edits to the page were to remove a section called “Air India Controversy.”

Another oft-edited article was the page for MP Pierre Poilievre, which received probably the most extensive revision—the entire article was deleted. And someone didn’t want anyone questioning whether or not he graduated from university,

If we look beyond the top articles, there are yet more curious edits. For example, someone with access to a House of Commons computer changed a page to highlight Canadian involvement in the burning of Washington, especially the burning of the White House during the War of 1812. In October 2007, the ozone page was amended to say that it is not at all harmful to humans. In December 2010, an historical addition was made to the “fuddle duddle” article. And though there were only three revisions to Pamela Wallin’s Wikipedia article, they were all attempts to remove significant information about her misuse of expenses and the subsequent audit.

Unfortunately, some edits took a nasty tone. The popular Canadian politics blog Small Dead Animals has at least one enemy on the Hill. In July of this year, someone tried (and failed) three times to add highly inappropriate commentary about sexual diseases to the blog’s Wikipedia page.

FILED UNDER: house of commons Wikipedia