The NDP falls back in line behind a 'mature' Jagmeet Singh 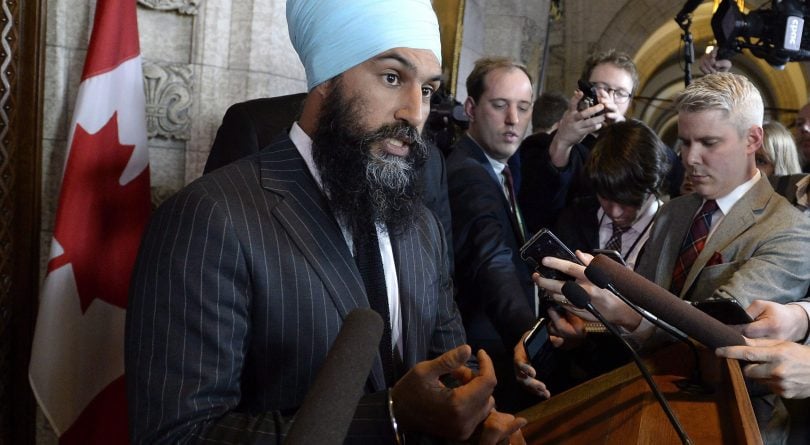 NDP Leader Jagmeet Singh speaks to reporters following the tabling of the budget in the House of Commons on Parliament Hill in Ottawa on Tuesday, Feb. 27, 2018. (THE CANADIAN PRESS/Justin Tang)

Long-time NDP MP Charlie Angus—Jagmeet Singh’s chief rival in last fall’s leadership race, and this week a voice bluntly critical of the new leader’s disciplinary action against another NDP stalwart—says today that Singh’s swift reversal of his contentious decision shows maturity and has calmed the roiling waters within his caucus.

“Anybody in politics finds it difficult to change a decision, because we live in the public,” says Angus, in an interview with Maclean’s. “But mature leaders know when decisions should be reversed and we should get back on track.”

Angus—along with Quebec MP Romeo Saganash—spoke out this week in defence of David Christopherson. Singh stripped Christopherson of his post as vice-chair of the influential procedure and House affairs committee after the Hamilton MP broke party ranks to vote for a motion condemning a Liberal government summer jobs program requiring participants to attest to their belief in abortion rights.

On Tuesday, Singh reversed himself, saying he’d had “several productive conversations” with Christopherson and other caucus members, and he wanted to “encourage feedback and constantly seek to improve our decision-making processes.”

Angus—who Wednesday morning said he hadn’t spoken to Singh in the past 24 hours—had described his colleagues as “stunned” by the rebuke of Christopherson, and said it showed “a lack of respect.” Now, however, Angus says the mood is calmer.

“When problems fester, it creates uncertainty,” he said. “So I think the fact that Mr. Singh responded as quickly as he did to his initial decision has reassured everybody.”

Discipline of individual MPs is simply part of caucus life, and sometimes tough decisions have to be made in politics, says Angus, who—like Christopherson—was first elected in 2004. Here, it was the particular target of Singh’s displeasure that bothered him.

“I was just surprised in this case because of Mr. Christopherson’s incredible role as the guy who is always making sure that ship is moving ahead, and his loyalty,” he says.

As for whether it’s awkward for him now to rejoin the fold after voicing his concerns so publicly, Angus offers the verbal equivalent of a gentle shrug.

“My loyalty is to the party and to my caucus,” he says. “I’ve been here for many, many years, but when I say something in public, I’m willing to stand by it and I hope that it’s to be helpful. And I think we’re in a much more helpful position today than we were at the start of the week.”

Over Singh’s first few months as leader, he has been beset by criticism of his appearance at a Sikh separatist rally and concerns about his perceived disconnect from his own caucus, since he isn’t a sitting member of the House of Commons. Given Angus’s recent status as a leadership rival, it was perhaps inevitable that the Timmins MP’s criticism would be read as a sign of serious dissent or even a coup-in-waiting within the New Democratic ranks.

Angus, however, says those outside a caucus room can squint a little too hard when trying to discern meaning in the tea leaves.

“Sometimes when issues come in public, it’s not indicative always of some great plot,” he says. “It’s an issue that has to be addressed, and sometimes it’s addressed in public. But it’s about making sure the ship is going in the right direction.”