The NDP knows what it stands for. Now begins the work of policymaking.

Inequality, pharmacare and intraparty democracy were on the agenda at the NDP's Ottawa convention. 'The time for timid is over', said Singh. 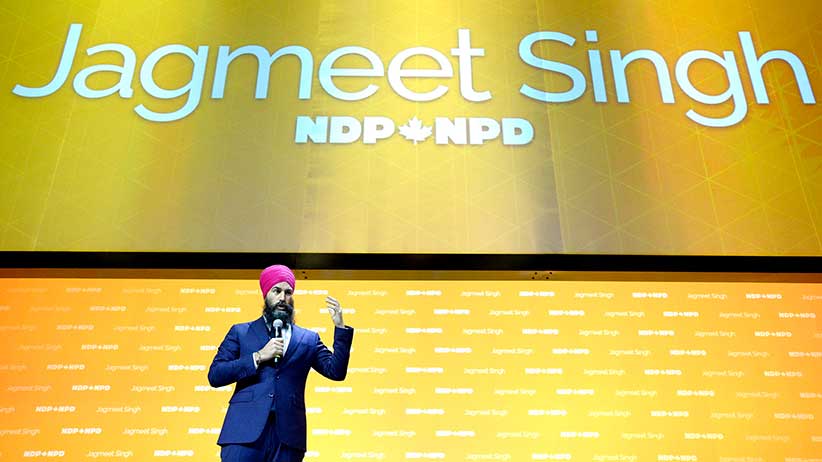 Boldness, in word at least, was not in short supply as Jagmeet Singh addressed the New Democratic Party’s convention in Ottawa on Saturday. “The time for timid is over,” he declared. “Too many people have waited for too long.”

Singh took the stage in the afternoon, in a room significantly more full than at any other time during the convention. “We need to commit today to implementing universal pharmacare in our country,” he said, to a standing ovation. Other key themes included tackling inequality, building public infrastructure including expanding Internet access, and protecting pensions.

“The NDP is nothing if not full of ideas,” quipped Rick Smith, executive director of the Broadbent Institute and a former chief of staff to the late Jack Layton. He saw a clear focus in Singh’s speech: The economy is working for some but not most. “He laid out a variety of very specific policy planks today to illuminate that,” Smith said. Indeed, Singh has of late telegraphed many of the ideas in his address, including in an exclusive sit-down interview with Maclean’s Paul Wells earlier this month.

But at E-611, campaign speak for the number of days until voting day, it will be some time before the NDP reveals a detailed set of policies. “The platform, to be adequate [and] current, needs to take into account the current events,” said Guy Caron, the party’s parliamentary leader. “What will be taking place next year might determine a large part of [it].”

While there is time for the NDP to fill out its platform before the writ drops, the 2019 campaign was very much in the air at the convention. “Every decision our party makes is made through the lens of being election-ready,” said interim national director Melissa Bruno in her report to the convention, including trying to get candidates nominated early and putting regional organizers in place.

The leadership race was a testing ground for new technologies, and those are being integrated into the party’s organizing strategy, she said. Singh’s own campaign, on which Bruno was a key advisor, used messaging tool Slack and one-to-one texting service Hustle to communicate with supporters and turn them out to events.

But what those candidates, organizers and tools will be communicating remains a work in progress. Of the 398 regular resolutions on the books at the start of the convention, 42 were debated, and almost all passed, sending them to the party’s policy book. Those included calls for mixed-member proportional representation, universal pharmacare, the closing of “tax loopholes,” and pressuring the Liberal government over the beleaguered Missing and Murdered Indigenous Women national inquiry. There was also support for pay equity, electric vehicles and paid sick leave.

RELATED: Why do men make more money than women?

As the party in power, the Liberals of course have the luxury of making their positions clear by passing laws. And the Conservatives have begun to lay the planks of their platform through private members’ bills, including a tax break for new parents and reducing benefits clawbacks for people with disabilities.

The resolutions at the NDP convention provide “a great sense of the direction that our activists want us to go,” Caron said. Some indication of the party’s specific policies may be gleaned from his and other MPs’ interventions in Question Period over the next few months. “Every time we see a problem we’ll try to say, ‘This is how we’ll be solving it,’ and we’ll see what the reaction [is] and [what],the response will be from Liberals and Conservatives,” Caron said. Taking into account the party’s values, “that will determine in large part the direction we’ll be taking in the next election.”

In the mandatory leadership review, 90.7 per cent of delegates voting opted to keep Singh in place. That show of support, and the glow of most resolutions passing handily, was dimmed slightly by the complaints of proponents of a motion to impose economic sanctions on Israel over the building of settlements in Palestinian territory. Yazan Khader, a member of Courage Coalition, a group pushing for “grassroots” involvement in party decision making, said that despite the support of a number of riding associations the motion was pushed down the list in its policy debate block, “and that of course killed it.”

None of the motions debated directly referenced the Leap Manifesto, which was one of the focal points of the last convention, in 2016. The package of environmental and economic policies seeks to limit fossil fuel development and use and boost renewable energy, and hike taxes on corporations.

In Edmonton, the manifesto’s advocates were set against then-recently-elected premier Rachel Notley, who made a case for natural resources and pipelines. This time around, Leap’s creators held their own event, a day before the convention, featuring organizers for left-wing politicians and parties in the U.S. and Britain. Singh did not attend.

The one attempt within the convention proceedings to bring that fight within the party to the fore, a move that would have added the right of provinces to make laws that “protect their environment from federal energy decisions,” failed overwhelmingly. The proximate example of that tension, British Columbia’s move to halt any further bitumen from being transported through its territory, a decision that effectively halts the Trans Mountain pipeline from Alberta, went mostly unmentioned.

Neither B.C. premier John Horgan nor Alberta’s Rachel Notley was in attendance at the Ottawa event, though Alberta MLA Jessica Littlewood touted her government’s environmental bonafides from the floor of the convention.

RELATED: Jagmeet Singh tries not to pick sides on the Alberta and B.C. pipeline fight

Policy planks put forward by Singh’s leadership campaign included a federal ban on carding, the eventual decriminalization of drug possession, and improved benefits for seniors and people with disabilities. He has also indicated a willingness to bolt on pieces from the agendas of his former rivals, suggesting that ideas like free tuition and a universal basic income are worth examining.

The need for a national pharmacare system has been a particular focus for Singh in recent weeks. The legal, fiscal and federal-provincial considerations of such a program and other policies proposed at the convention would be numerous. Canadian political parties rarely have the resources to maintain huge research offices. But Smith says that in contrast to the party-dominated policy landscape of a few decades ago, today there’s a “very healthy” cluster of training organizations, think tanks and non-profits on both left and right “feeding political parties with raw material on a daily basis.” It’s a development Smith says is healthy, noting that Broadbent’s material was cited by both the Liberals and NDP during the last election.

Singh has said he wants to be prime minister, so the stakes for the party’s platform, when it is announced, could not be higher. Caron sees something of a double standard in the level of scrutiny to which the party’s policy is subjected. He contrasts the reaction to NDP proposals for new programs with that to tax cut plans from the Conservatives. “[The] questions that we’re asked [are] a lot more large in scope than what Conservatives get for their own policies, which will cost maybe as much,” he says.