A wind farm in every kale patch! The NDP doubles down

The NDP goes back to basics as a party: caring, and being bad at math 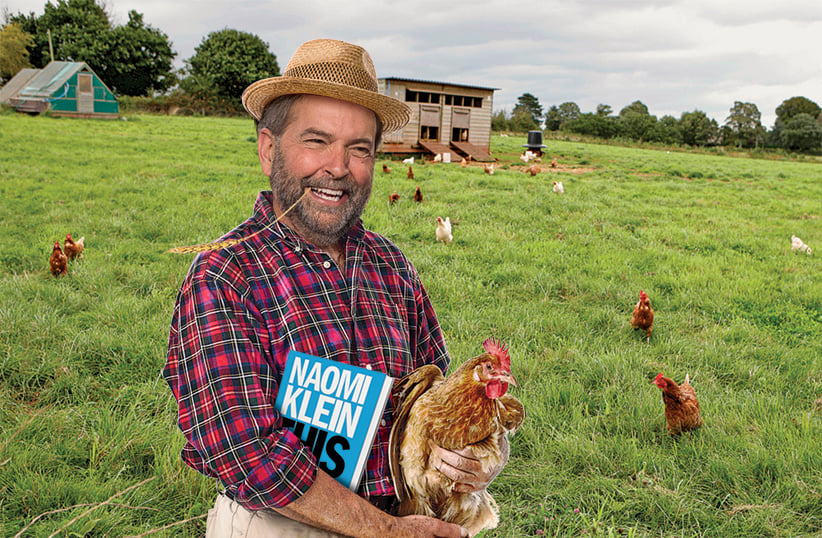 The New Democratic Party went for it in the 2015 election. They promised social justice. They promised a balanced budget. They promised hot and cold running ponies, if only Canadians would finally give them a shot at power.

After decades on the fringes, they put themselves out there for real—and got rejected. Now the party’s true believers are trying to bury all evidence of their shame. They’re dumping the leader. They’re rethinking their policies. They’re getting back to basics as a party that’s good at caring and bad at math.

Related: Inside the NDP’s hard-left turn into an existential crisis

We can all relate to regret of this magnitude. I for one have dedicated most of my adult life to tracking down and destroying photographs from my 1979 velour sweater phase. (Stop laughing: Burgundy was in at the time.) But at the party’s convention last weekend, delegates took things a little far.

Consider, for instance, the widespread affection for the so-called Leap Manifesto, which imagines a Canada that’s free of fossil fuels. What a wonderful concept! A clean-energy utopia in which everyone gets a hemp-powered robot butler whose only emission is love! One small catch: All of Alberta’s oil apparently has to remain in the ground, which is no problem because the province can totally fall back on its other major industry: recessions.

Oh, did I mention that the convention took place in Edmonton? The whole thing was basically a weekend-long GIF for “awkward.” The Leap Manifesto refers to pipelines as “the infrastructure of the past”—which is weird because I was almost 100 per cent sure we live in the present, where stuff like “oil” needs to get to places like “cities and towns” so people like me “don’t have to bicycle.”

Can you spot the other big problem with the Leap Manifesto? It’s right there in the title. Manifestos are generally the domain of bearded revolutionaries, serial killers and our more ambitious hermits. By and large, manifesto authors are people not trusted to run a bar tab, let alone a country.

The authors sure got to Tom Mulcair, though. Last fall, Mulcair campaigned on a no-deficit pledge. This past weekend in Edmonton, he had not a critical word for the manifesto, even though it would drive our economy so far into the past that the suggested retail price of Naomi Klein’s next book would be two chickens and a sheaf of hay.

Such are the realities of political skin-saving. Even before the convention, there were signs that Mulcair’s leadership was in peril. Despite months of effort, no one had figured out how to make him stop Smiling Like That. But his keynote speech didn’t help his cause.

It was filled with the usual NDP boilerplate—A wind farm in every kale patch!—but at no point did Mulcair bother to muster an argument for keeping his job. He just kept talking about things that everyone could agree on. Think of it this way: You smash up the family car. The family gets a new car. You want to drive the new family car. So your pitch is—puppies are adorable?

Mulcair eventually tried to tug at a few heartstrings but the ensuing silence made it pretty uncomfortable. “Even when we suffer a setback, we stand strong and united.” Right, guys? GUYS??

Tom was subsequently turfed with nary a thought for the rest of us, who endured an NDP leadership race only four years ago. Do you remember it? The candidates were so nice to one another. It was basically nine months of people nodding and declaring, “Couldn’t have said it better myself!” It was excruciating.

Clearly, there are no small number of New Democrats who prefer that the party stay true to its beliefs and reside on the fringes, well-meaning but inessential—like Channing Tatum and grandparents. Officially, delegates at the convention voted only to “recognize and support” the Leap Manifesto as a “statement of principles.” But even this propels the New Democrats away from the mainstream.

Today, the party has no clear leader in waiting. It has no strategy to take on the Liberals. And it’s about as likely to win another federal seat in Alberta as Stephen Lewis is to use a one-syllable word.

A short six months ago, the NDP tried to be everything to everyone, and they got trounced. They are now well on their way to being one thing to hardly anyone.