The new Hy's: Where official Ottawa goes after hours

When an iconic downtown steakhouse and bar closed its doors, Metropolitain Brasserie turned into the Parliament Hill crowd's social headquarters 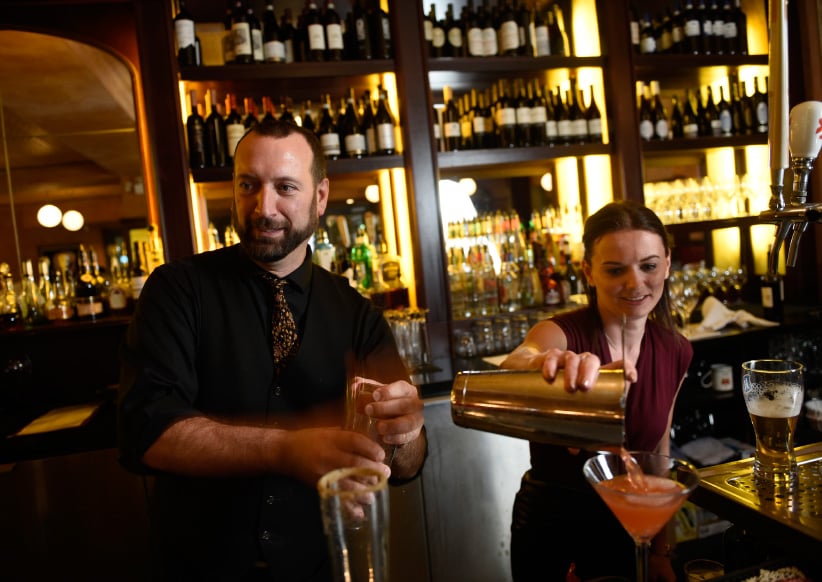 Anyone who has ever sat in a restaurant and watched, transfixed and vaguely guilty, as a pair of strangers nearby negotiate the end of their relationship knows the signs. You can read the body language that unfurls the story as plainly as a silent movie, the murmured voices that—even if the words aren’t audible—paint the air with emotion and the recognizable human theatre we can all match to some moment in our own past.

It’s a little like being on staff at the cozily swank downtown Ottawa restaurant and bar Metropolitain Brasserie, the designated headquarters of the Parliament Hill crowd after hours. In a place filled with powerful people having potentially sensitive conversations, operations manager Sarah Chown and bartender Michael DiPietrantonio say you figure out right away whether you’ll be involved in conversation with a group of customers, or ghosting in and out quickly to top up glasses.

RELATED: Hy’s, where secrets were swapped over supper

But asked if the job requires discretion, both look frankly puzzled by the notion they would even hear the chatter going on. “I’ve been in the industry long enough that I don’t listen to conversations anymore. I just don’t want to,” says DiPietrantonio. “If they’re talking to me, yeah, I’ll listen. But if not, I just go about doing whatever I have to do.”

Metropolitain became the unofficial watering hole to Ottawa’s federal politicians and staffers after Hy’s Steakhouse & Cocktail Bar closed last winter, but Chown says they’d been drawing that crowd for some time. DiPietrantonio tended the bar at Hy’s for 15 years; he’s seen many a government come and go from across an expanse of polished wood. He doesn’t notice partisan trends in Ottawa’s social anthropology—the notion that things quieted for a few years under the Harper government’s message control doesn’t hold water for him—and says politicians follow the same drink trends everyone else does: bottled beer in the ’80s, draft beer in the ’90s and now it’s all about wine.

FROM THE ARCHIVES: The restaurants that matter to politicians

However, there are clear patterns in the daily and seasonal behaviour of the herd from the Hill. The busiest periods are when Ottawa’s warm-weather tourist season overlaps with the House sitting. The fall has a frenetic back-to-school vibe when the political crowd flocks to town, and June sees a flurry of wrap-up parties before the House rises for the summer. Chown keeps a calendar on the bulletin board in her office that tracks the parliamentary schedule, along with details of every other Hill-related function she gets her hands on. “Really, for me, it’s about watching the calendar and having people on the inside who share information and tell me what’s happening, what time it’s at, where it is, how many people are going and what party it is that’s having the event,” she says.

On weekdays, Metropolitain reaches critical mass when the day’s meetings wrap up under the gaze of the Peace Tower, a five-minute walk away. Hill Hour runs from 4 to 7 p.m., offering deals on oysters, shrimp and other small plates, and once the after-work rush starts to thin out, it’s replaced by the dinner-meeting crowd. And the mocking rumours are largely true: an Ottawa crowd is an early crowd. “The place will be dying out at 11 o’clock and you’ll have the last table in here and they’re clearly not from Ottawa,” Chown laughs. “Ottawa is not like Montreal or Toronto. It never will be—at least not for a while,” says DiPietrantonio. “It needs to grow more—it’s still a young city.”

However, St. Patrick’s Day—only bigger, and crazier—for a bar that caters to politicians is budget day in the spring, when businesspeople, MPs and staffers descend on Ottawa from across the country to hear what’s on the books. The first year DiPietrantonio worked a budget day at Hy’s, it was just him and a server, but the mayhem has grown every year. Now, they’ll have something like four bartenders and five servers on the floor, customers jammed in lapel-to-lapel across the golden-lit expanse of the restaurant. One year, back at Hy’s, DiPietrantonio happened to be on vacation when the budget dropped; they told him he could never do that again.

Now, like the rest of Hill-gazing Ottawa every winter, Metropolitain is waiting for intel on the date of the budget so they know when to expect the power-suited masses to arrive.