Andrew Scheer is the new leader of the Conservative Party 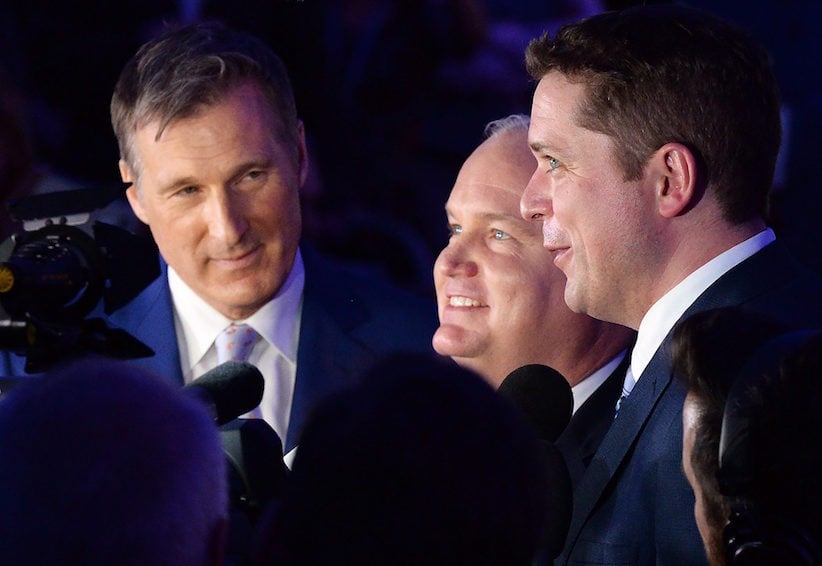 Candidates Maxime Bernier, left to right, Erin O’Toole and Andrew Scheer speak to reporters following the 12th ballot at the federal Conservative leadership convention in Toronto on Saturday, May 27, 2017. THE CANADIAN PRESS/Frank Gunn

TORONTO – Andrew Scheer, the apple-cheeked Saskatchewan MP and former Speaker of the House of Commons, survived a 13-ballot battle with presumed leadership front-runner Maxime Bernier on Saturday and eked out the narrowest of wins in the fight for the helm of the federal Conservatives.

The nail-biting process of winnowing the 13-candidate field went the full distance before Scheer, 38, was declared the winner with 50.95 per cent of the available points, barely besting longtime front-runner Maxime Bernier.

Bernier had led throughout the previous 12 ballots, but finished a close second with 49.05 per cent.

“What a campaign this has been,” Scheer told the crowd as he acknowledged and thanked Bernier – who appeared to be fighting back tears of disappointment – and his other leadership rivals for their efforts and hard work.

“Time away from your families and your everyday lives – what a sacrifice this has been for all of you,” he said as the crowd chanted his first name.

“We have all grown because of your hard work … you have each brought your passion and what you believe in to the centre stage, and I plan to ensure the very best of those ideas are brought forward … to help us win in 2019.”

Bernier is a longtime Quebec member of Parliament, but support in his home province wasn’t a sure thing, given his profuse opposition to the supply management system that regulates some of the province’s most lucrative agricultural industries.

After the first ballot, he had captured just 48 per cent of support from his own riding of Beauce, with rival Scheer nabbing a surprisingly high 47 per cent.

Bernier said he remained committed to his own principles – and to the party. He said he sees a place for himself in a party led by Scheer, even though the ultimate victor’s stay-the-course approach differed so wildly from his own big policy ambitions.

But the narrow margin of victory was sure to be a challenge for the party to overcome going forward – especially as early as Monday, when Scheer will take his place as leader in the Commons.

“Every single kind of Conservative is welcome in this party and this party belongs to all of you,” he said.

“We all know what it looks like when Conservatives are divided; we will not let that happen again. We win when we are united.”

The ranks of the party are as large as they’ve ever been, he noted, and it appears to have renewed fundraising power.

“I’m here to tell you there is renewed hope for Canada, starting today. The pain and hardship the Trudeau Liberals are causing Canadians is just temporary.”

“I’m a free market guy so I like competition,” Bernier said earlier, after he was seen exchanging a nervous laugh with Scheer after the results of one of the ballots. “It’s a tough competition.” 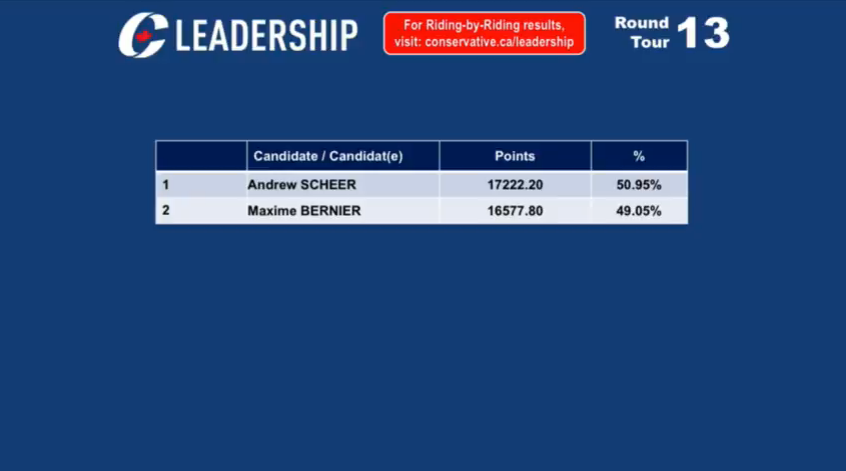 The tally on the final ballot.

Gone in the 9th ballot was controversial MP Kellie Leitch, the former cabinet minister and orthopedic surgeon whose key campaign pledge to screen newcomers for Canadian values saw her dominate early media coverage of the race, only to fade from prominence as the vote grew nearer.

Pierre Lemieux, a former MP from Ontario who ran championing socially conservative policies, dropped off in the 8th ballot, while Brad Trost hung in longer than many expected, dropping off on the 11th ballot.

Obhrai was the first of 13 candidates to drop off as the party begins disclosing the results of voting, which began weeks ago by mail and culminated Saturday with members voting in person at the Toronto Congress Centre and polling stations across the country.

O’Leary dropped out of the race abruptly last month but was too late to have his name removed from the ballot.

The lengthy ranked-ballot system and the size of the field meant several rounds of balloting were necessary to crown a winner. Officials say 132,000 ballots – the party has some 259,000 eligible members – had been received by the Friday deadline for mail-in ballots.

Candidates were scored not by votes, but by points: every riding in the country was allocated 100 points, and each candidate received a number of points depending on their share of votes in that riding.

Mesh bags released Conservative party balloons over the crowd at the Toronto Congress Centre as Scheer invited his former rivals and campaign officials to join him onstage, to the strains of a guitar-heavy version of “We Are the Champions.”

Ahead of Saturday’s duel, outgoing interim leader Rona Ambrose took to the stage for one final farewell – and to send some words of advice to her successor.

Bedrock conservative values are more important than any policy proposals shared during the campaign, Ambrose said.

“When we rally around those values and speak with one voice there is no limit to what we can achieve together,” she said.

The winner should also take heed of the advice former leader Stephen Harper gave caucus when she replaced him, she added.

“The measure of a good leader is also how they treat their opponents in defeat,” she quoted Harper as saying.