The No. 1 question for the country's No. 1 soldier? John Geddes has the answer 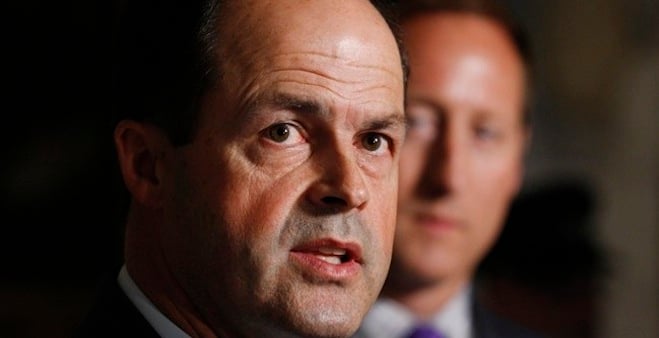 As Canada’s new Chief of Defence Staff, Lt.-Gen. Tom Lawson takes on an massively complex task heading up the Forces just as the government looks to overhaul its “Canada First Defence Strategy.” Yet of all the questions Lawson might be have been asked, one overshadowed all others as his was introduced as CDS by Defence Minister Peter MacKay on Parliament Hill this morning.

Where does the country’s new top soldier—himself a former fighter pilot and, most recently, deputy commander of North American Aerospace Defense Command in Colorado—stand on the controversial F-35 fighter jet?

After all, as a longtime top Air Force officer, Lawson has been outspoken in his support for the F-35, also known as the Joint Strike Fighter. When the U.S.-led development of the so-called next generation fighter hit a major setback early last year, it was Lawon who defended the jet “without hesitation” as “the only aircraft for the future.”

Back then, the Harper government also seemed firmly committed to the F-35. But last spring the Conservatives changed their messaging in the face of troubling questions about the multibillion-dollar cost of the acquisition, stressing that the Joint Strike Fighter was only one option and that Canada hadn’t signed any contract to buy.

So how did Lawson handle the inevitable questions about whether or not Canada should buy these jets? Here was his initial, cautious response: “The F-35 in particular is part of a whole-of-government effort and we will continue to take our lead on the F-35 from the government.”

Pressed to be clearer on his own preferences, he said: “The F-35 is a program that is hitting milestones and doing quite well. It will continue to contend for the replacement for the CF-18. I’ll be providing our best advice throughout the process.”

That bit about “hitting milestones” was as close as an endorsement as he came. Hardly emphatic. Still, as his only hint at an assessment, it was definitely on the positive side. It would be fair, then, to guess that Canada’s new top general remains favourably disposed, as he has been in the past, toward the most contentious military procurement of recent times.

More to come on the story of this key appointment later today.