Is the niqab truly a 'false debate', or the kind of rare emotional issue that can sway undecided voters? 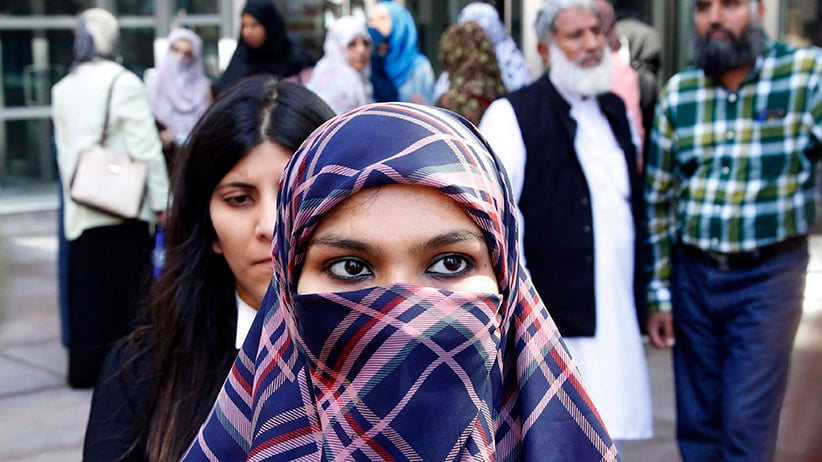 If the Harper government ultimately gets its way—if niqab-wearing Muslim immigrants are forced to momentarily unveil their faces on the day they’re sworn in as Canadian citizens—how many women would the policy actually affect? A couple of dozen per year? A hundred, maybe? Whatever the sum, it would be minuscule compared to all the attention the issue has generated.

Practically speaking, the Tories’ plan would infringe on the tiniest percentage: a few people, for a few minutes of their lives. The Conservatives are not trying to legislate a ban on Muslim face coverings. What they’re saying is that if a woman in a niqab wants to become Canadian (to join the national “family,” as Stephen Harper puts it), she must be willing to show herself during the official citizenship ceremony. When the event has finished, she’ll be free to cover up again and be on her way.

In a country grappling with much weightier challenges—our teetering economy, for one—it’s fair to wonder why the election campaign has become so fixated on something that will have zero impact on nearly every single voter. National Post columnist Andrew Coyne was among those who couldn’t fathom why the question of “whether a few dozen women” can wear a veil at a citizenship ceremony consumed so much airtime during last week’s French leaders’ debate. “It’s ridiculous,” he said during a heated segment of the At Issue panel on CBC’s The National. “It’s not an issue that is germane to the future of this country. It is a trivial issue in the grand scheme of things.”

But is it trivial? Is it truly a “false debate,” to borrow a phrase from Green Leader Elizabeth May? A “weapon of mass distraction,” as NDP Leader Tom Mulcair described it? Or is that symbolic image—a Muslim woman being allowed to shield her face while pledging the oath of citizenship—a window into a much deeper debate about the core values Canadians hold dear?

In other words, is it that rare type of visceral, emotional issue that can sway an undecided voter?

“These are very rarely ballot-booth issues, but they can be conditioning issues that frame your general sense of: ‘Where do I belong in the political spectrum?’ ” says Frank Graves, president of the polling firm Ekos Research Associates. “I don’t think people will say: ‘I’m going to vote simply because of the niqab issue.’ But I do think it’s a factor. To say it’s not affecting the voter outlook is wrong. It simply is.”

The now-raging debate dates back to 2011, when then-immigration minister Jason Kenney implemented an abrupt new policy that prohibited people from covering their faces during citizenship ceremonies. Zunera Ishaq, a 29-year-old Pakistani, challenged the rule in Federal Court, arguing that the Citizenship Act ensures all candidates be given the greatest possible religious freedom when they take their oath. (She insists she would have no objection to showing her face to an official before the ceremony, but is adamant, for religious reasons, about swearing her oath in a niqab.)

Although the Federal Court sided with Ishaq, Ottawa promptly appealed. The niqab “is rooted in a culture that is anti-women,” Stephen Harper told the House of Commons. When the government lost again last week—and signalled yet another appeal, this time to the Supreme Court—the controversy inevitably spilled onto the campaign trail.

“What is really being tested here are the limits of tolerance,” says Darrell Bricker, a pollster with Ipsos Global. “You’ve got one group, lawyers and civil libertarians, saying this smacks of intolerance. But the problem is [that] this is the type of intolerance that the vast majority of the Canadian public doesn’t see as intolerance. They see it as establishing the boundaries of acceptable social norms.”

The latest polls certainly confirm that. One, conducted in March by Forum Research, found that two-thirds of Canadians (67 per cent) oppose the wearing of niqabs during citizenship ceremonies, while an Ipsos poll found a whopping 88 per cent support for the government’s stance. A Leger survey, commissioned by the Privy Council Office over the winter but not released until last week, tallied similar results: 82 per cent of the 3,000 people surveyed agreed with the no-niqab policy.

“Participants felt that those who attended such ceremonies needed to be clearly identifiable and did not think it made sense that someone should be able to hide [her] face,” said the Leger report. “Other participants felt that this was, first and foremost, a value-based issue. To them, this was about new immigrants embracing Canadian values when being welcomed as new citizens. Removing [her] niqab or burka was the normal thing to do in Canada and, therefore, the Canadian government was right in issuing this direction about showing their faces.”

Although the policy will affect such a scant few, the controversy clearly points to a much deeper issue, Bricker says. As every poll confirmed, more than half of Canadians consider the Islamic veil to be a symbol of oppression, despite the fact that many women who wear a niqab dispute that assumption. And, according to one Leger survey conducted in March (not the one commissioned by Ottawa), 60 per cent of respondents said niqabs should be banned, not only during citizenship oaths, but in public spaces such as government offices and courthouses.

“To the average person, regardless of the explanation provided by the person wearing it, the niqab does suggest some form of oppression of women,” Bricker says. “Whether it is or isn’t, it’s a complicated argument, and smarter people than I can have that discussion. But the average Canadian looks at it and says: ‘There is something wrong with it.’ When you’re living in a liberal democratic society, particularly one that has made such tremendous progress on issues like the status of women and the need for equality, to see something like this just rubs people really the wrong way.”

Perhaps not surprisingly, the anti-niqab sentiment coincides with a noticeable shift in Canadians’ overall attitude toward immigration. Ten years ago, only one-quarter of citizens believed there were too many immigrants moving to Canada. Today, according to a March report from EKOS, the number who agree with that statement has climbed to nearly half (46 per cent), with 41 per cent saying the government is letting in too many visible minorities. “We haven’t had the same kind of fierce debates about immigration and race that have torn apart Europe and America, but some of the evidence suggests we may be moving a bit in that direction,” Graves says. “This allergy to pluralism and multiculturalism, which is fairly recent, is actually growing.”

Which may explain why such a seemingly trivial piece of policy—banning niqabs during citizenship ceremonies—triggers such passionate reactions. “There is no question that it is currently sorting the electorate more than issues they say are of greater concern, notably, a moribund economy,” the Ekos study concluded. “It is, however, the first really explicit political debate about values that we have seen in Canada for some time.”

But is the niqab question pressing enough to actually decide a particular riding? Could it be a legitimate difference-maker on Oct. 19? It could in Quebec, perhaps, where the NDP holds most of its support, but whose opposition to the Conservatives’ no-niqab stance goes against the overwhelming opinion of Quebecers. In Ontario? Not likely, especially since the provincial government has vowed to intervene against the feds if the Ishaq case does reach the Supreme Court. “In the Prairies, maybe it does resonate,” says Lorne Bozinoff, president of Forum Research. “But those are Tory seats anyway. Whether the Tories get 45 or 50 or 55 per cent of the vote, what does it matter?”

When Forum released its poll in March (the one that found 67 per cent of Canadians oppose face veils at citizenship ceremonies), Bozinoff said the niqab issue “will be little more than a sideshow” in the election, because the policy “directly affects such a vanishingly small number of women.” Six months later, despite the growing intensity of the debate, he is sticking to his prediction.

“The thing about a long campaign like this [is] it’s unlikely for a flash-type issue to come and swing things, because things get really debated out,” he says. Consider the Duffy trial, for example, or the Syrian refugee crisis. “They kind of got talked out in the end and people moved on. We still have a whole campaign to go, about three weeks, which is almost the length of a regular campaign. It’s hard to imagine, three weeks from now, we’re still going to be talking about niqabs.”