The Nova Scotia murders: End the farce. Call the inquiry.

Paul Wells: There is no excuse for anything but a public, independent inquiry, and the powerful voices now calling for action cannot be ignored 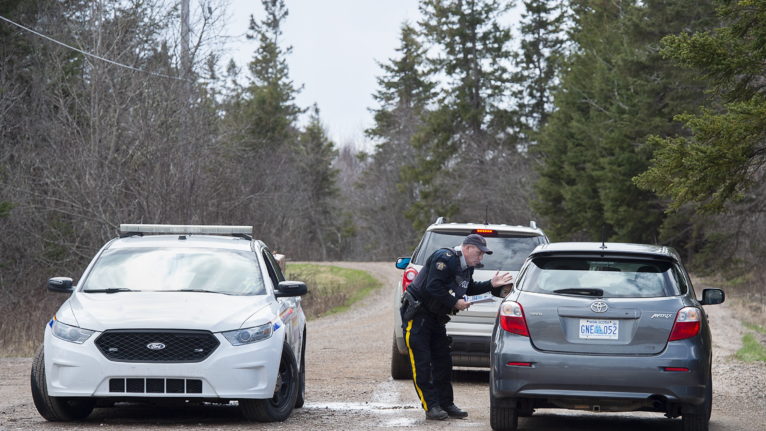 An RCMP officer talks with a local resident before escorting them home at a roadblock in Portapique, N.S. on April 22, 2020 (CP/Andrew Vaughan)

Look, I know it’s hard to concentrate on government business with all the Trudeau family conflict-of-interest self-immolation going on, but let’s give it a try.

“There is obviously an ongoing RCMP investigation into what actually happened in terms of the shooting,” Justin Trudeau said on June 25, the last time someone—Maclean’s reporter Nick Taylor-Vaisey—asked him about the April mass murder in Nova Scotia.

“But there are many, many questions about the role of domestic violence, about the situation where the shooter was able to get his hands on police vehicles and kit,” the Prime Minister continued. “There are many larger questions. And we are working with the government of Nova Scotia to ensure a process whereby those questions get answered—for the families, for the communities, for Canadians across the country. And we certainly hope to have things to announce in the coming days.”

This was a perfectly serviceable string of declarative sentences from the Prime Minister, and it was good to hear. Five days before Trudeau spoke, I had joined a growing list of people wondering why a public inquiry into the worst mass murder in Canadian history wasn’t already underway. Nova Scotia’s justice minister, Mark Furey, had predicted in early June that an inquiry would be called within days. Then in mid-June Furey said it was getting closer. Now Trudeau said he expected to announce something “in the coming days.”

Great. But that was two weeks ago. Furey, the long-suffering provincial minister, had to tell a reporter yet again last week that an inquiry was delayed. His reasons are worth your attention. At first he referred to “legalities and technicalities.” Simple detail work. But then he took another run at it. “We want to take a different approach to sourcing the questions that individuals would have, particularly the family members,” he said. “We’re taking a human-centred and trauma-informed approach consistent with some of the principles of restorative methodologies.”

This was actually less of a word salad than it sounds. Restorative justice is a widespread concept in law. Nova Scotia, like a lot of places, makes common use of restorative justice in cases where everyone involved can agree a wrong has been done. They get together, discuss how things got off track, come up with a plan for the future. It reduces the load on the rest of the criminal justice system. People feel better.

Except there’s a problem with applying it to Gabriel Wortman’s 13-hour slaughter spree that ended 22 lives before Wortman himself died. And the PM put his finger on the problem when he spoke on June 25. “There are many, many questions about the role of domestic violence.”

Now, dozens of women’s organizations have joined forces to remind the governments of Canada and Nova Scotia that, precisely because there is a gender element to the April murders, there can be no place for restorative justice in investigating what happened.

Here’s their letter, which they sent on Tuesday to Furey, federal public safety minister Bill Blair, and federal justice minister David Lametti. It is an absolutely extraordinary document. It rejects Furey’s “restorative” approach out of hand; scolds him for blaming restorative-justice principles for the two governments’ ludicrous and ever-longer delay; and demands a prompt, open, effective, public, inquiry, backed by subpoena power.

“We were shocked to see media reports that the launch of an inquiry into the April, 2020 massacre in Nova Scotia was being held up by an attempt to graft a ‘restorative approach’ onto the traditional federal-provincial public inquiry,” the signatories begin. “We wish to express our grave concern about, and opposition to, the use of any process for the federal-provincial response to the Nova Scotia mass shooting which is not fully open and public or which does not mandatorily compel the pertinent institutions and state actors to provide relevant information.”

Who signed the letter? Basically everyone. The letter is signed by 26 women’s groups and social services, both national and in every part of the country. By and large they’re impossible to dismiss as some academic-left fringe. They’re the mainstream on gender issues in law, protection against sexual violence and gender discrimination, and ground-level social services for women in Canada. They’re the groups that governments claiming to be preoccupied with domestic violence should be consulting on the Nova Scotia file.

They include the  Ending Violence Association of Canada, the National Association of Women and the Law, the Women’s Legal Education and Action Fund (Women’s LEAF), Women’s Shelters Canada, and—to name only the regional organizations in Nova Scotia, though they’re joined by several from other provinces and territories—women’s groups and social services in Antigonish, Halifax, Sydney, Port Hawkesbury, Truro and Yarmouth.

The letter makes it clear these groups are not merely expressing a preference or offering stylistic advice. It’s a matter of established Nova Scotia government policy. In Nova Scotia, they write, “there is a moratorium on the use of restorative justice processes for offences involving domestic or sexual violence.” And indeed there is; here’s Mark Furey talking about it only a year ago. The reason for the moratorium is not technical or trivial: it’s that bringing parties together in private imports the power imbalances that drive gender-based violence into the process. A woman can’t quietly discuss bygones with a tormentor, or, in his absence because he’s dead, with the police who took nearly a day to stop the torment.

Nor could a restorative approach, operating as they usually do behind closed doors, bring the facts to light. Here the letter drafters’ strong advocacy of a truly public process is heartening to read. “The demand was for transparency and accountability—for a fully-open process. Providing the public with an after-the-fact report or series of reports drafted by an intermediary is not informing the public through open hearings that any member of the public can attend, that the media has complete access to, and through which every Canadian has access to the information disclosed.”

Finally, the letter states again and again that any attempt to involve the RCMP in designing the inquiry process or shaping its outcomes is illegitimate on its face—because the RCMP’s behaviour is central to the questions an inquiry must resolve. “The public deserves an inquiry into the NovaScotia mass shooting in which the process is presided over by an independent and impartial commissioner rather than a process facilitated by a team of commissioners, some of whom are interested parties.”

What these distinguished and deeply engaged advocates and activists are calling for is, in the end, very old-fashioned. An open hearing room. Cameras in the back. Witnesses compelled to appear. A process with the simplicity and clarity to bring the facts of a national tragedy to light. This is, ironically, the sort of process Mark Furey was describing more than a month ago, before he got tugged off onto some absurd and endless procedural siding by his incurably busy-bodying federal cousins.

I know Justin Trudeau is distracted by the nonstop absurdities of his family’s assorted moonlighting ventures. That should not matter. This country cannot wait forever on a decision by a compromised Prime Minister who cannot make decisions. Canada has a justice minister with the authority to determine the scope and nature of judicial inquiries. Nova Scotia has a federal minister with a mandate to promote the province’s interests at the cabinet table. Unfortunately the justice minister is David Lametti and the province’s voice at cabinet is Bernadette Jordan, and neither has had anything to say about any of this in three months. One day both will find their federal political careers behind them. Will their Instagram accounts keep them warm as they ponder what they could have done with the time the voters gave them?

It’s three months since the murders. It’s two months since families and prominent Nova Scotians began demanding a speedy inquiry. It’s a month since the federal and Nova Scotia governments started claiming they were about to do something. It’s two days since the best advice on gender issues said, loudly and clearly, that there is no excuse for anything but a prompt, public, powerful and independent inquiry. The longer they stall, the clearer it becomes that Trudeau and his provincial cousins are trying, not to ask questions, but to pre-determine the answers. It’s a farce. It needs to end. It’s time for a public inquiry now.