The final act of the Bloc Québécois' once and future king begins. But here's why history, there for the writing, probably won't be penned. 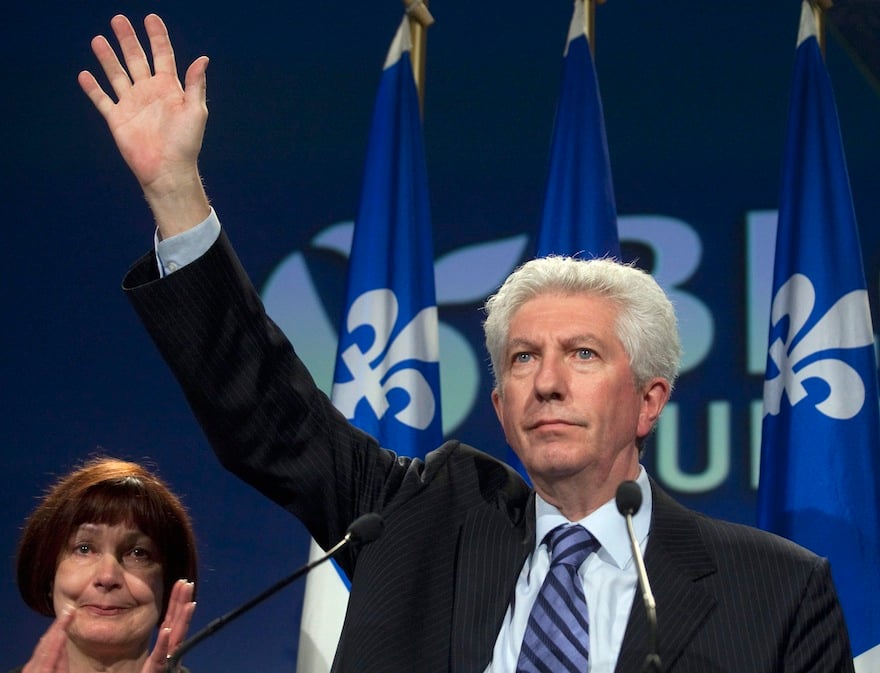 Bloc Quebecois Leader Gilles Duceppe waves goodbye at the end of his speech with his wife Yolande Brunelle s in tears Monday, May 2, 2011 in Montreal, where Duceppe announced his resignation. (Jacques Boissinot/CP)

Like ancient Greeks and fictional boxers, politicians are often a product of their own narrative. Proving one’s mettle in the face of long odds and self-inflicted disaster worked as well for, say, Stephen Harper, as it did for Homer’s Odysseus and Stallone’s Rocky. Prideful Odysseus finally made it home. Punch-drunk Balboa won a nation’s heart. Harper, that frustrated egghead from the oil-soaked barrens of the west, became Prime Minister of a G7 country. By definition, winning is an obsessive, if oft-interrupted, quest.

After a four-year hiatus, Gilles Duceppe is expected to announce his return as leader of the Bloc Québécois, thus attempting to kick-start the final act of his political narrative. History is there for the writing: For nearly two decades, Duceppe was the voice of Quebec’s indignation in Ottawa, only to be unceremoniously turfed in the 2011 election, victim of the NDP’s orange crush. After graciously bowing out, he limped onto the pages of Le Journal de Montréal—just another retired sovereignist given his due space in Quebecor’s vast echo chamber.

Yet Duceppe seems to have been rattled out of complacency, as the Bloc suffers further disgrace at the hands of Mario Beaulieu, the second, and most hapless, of the Bloc’s leaders since 2011. In an ideal situation, Duceppe reclaims some east-end Montreal fiefdom—his old seat of Laurier-Sainte-Marie, perhaps—and rallies a fresh crop of Bloc candidates to electoral glory. Naysayers are proven wrong, sovereignty is alive and well. NDP Leader Thomas Mulcair cries in his beard. Cue Gens du pays.

But here’s where Duceppe’s narrative will likely break down. First, there’s the NDP. The party rose to power, thanks largely to its Quebec support in 2011. Sovereignists, Duceppe included, like to attribute this to a collection of unfortunate coincidences, chief among them, Jack Layton’s rainbow charm offensive in the province.

Perhaps. Yet, while he isn’t quite the stuff of sunshine and moustaches, Mulcair has successfully maintained NDP support in Quebec. After a diabetic spike in support that was Layton’s triumph—and subsequent crash following his death—the NDP is only a few points from where it was prior to the 2011 election, according to poll aggregator Éric Grenier. These are formidable numbers, particularly for a party that wasn’t thought to have any grassroots in the province.

Since 2011, the NDP has become political second nature. Case in point: Duceppe’s own former seat in the downtown Montreal neighbourhood of St-Marie-St-Jacques is now home to Hélène Laverdière. After solidly thumping Duceppe in 2011, Laverdière has become one of the more respected voices within the NDP. Ditto Alexandre Boulerice, who has leveraged his perch in the east-end Montreal riding of Rosemont-La Petite-Patrie into a position of influence within the Quebec organization of the party. To put it indelicately, the NDP’s success in Quebec comes partly due to its ability to attract and hang onto left-leaning Québécois de souche types often affiliated with the province’s union movement—people over whom the Bloc would have had a virtual monopoly in a previous generation.

And to consider the Bloc’s fate as an accident of history is to paper over the party’s slow demise prior to 2011. Yes, the party dominated federal politics in the province for upward of three decades. Yet, for the most part, its electoral successes have been a series of diminishing returns. In 1993, the party received 49.3 per cent of Quebec’s popular vote. Save for 2004, when Quebecers were rightfully doped up on sponsorship scandal-related outrage, it never again came close. In 2008, it received roughly 38 per cent of Quebec’s vote—its worst showing in its history until 2011. In this light, the Bloc’s 2011 defeat, with a mere 23 per cent support, was less sudden death than a merciful end to a terminal disease known as voter ambivalence.

This is Duceppe’s second attempted putsch since retiring. In 2012, not a year after losing the federal election, he tried to wrestle the Parti Québécois leadership away from Pauline Marois. Weakened by yet another spleen-venting from the PQ’s forever-restive base, Marois nonetheless fought off Duceppe’s volley with the ferocity of a cornered badger. Not coincidentally, word of spending irregularities at the Bloc while Duceppe was leader sprung up in the papers, and Duceppe retreated. It is an indication of the Bloc’s fortunes that Beaulieu would so quickly roll over for Duceppe.

Duceppe doesn’t much like Beaulieu. Granted, there’s a lot not to like. Beaulieu, who will remain the Bloc’s president, is an ethno-nationalist whose most notable contribution was a crude suggestion that the NDP was a slippery slope to Islamic extremism. In a newspaper column, Duceppe once compared him, unfavourably, to a redneck. With Duceppe back at its helm, the Bloc will veer back into its natural position on the pillowy and inclusive centre-left. The party will fare better as a result.

But, at 67, with 21 years and one terrible defeat under his belt, Duceppe needs a big win in order to secure his own narrative for the ages: his own seat, at the very least, and at least 30 per cent of the popular vote.

Otherwise, this adventure will be little more than a revenge fantasy. And those rarely end well.