The opposition must ask better questions about the F-35

Here's a good one: Why is this jet the only possible future fighter aircraft for the Canadian Forces? 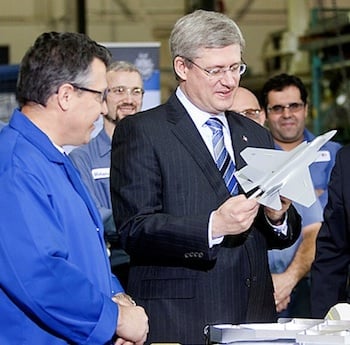 Photograph: Office of the Prime Minister of Canada

Philippe Lagassé is assistant professor of Public and International Affairs at the University of Ottawa.

What did members of Parliament learn from Tuesday’s public accounts committee hearing on the F-35 procurement? Mostly that arguing with senior officials about costs and accounting methods is a frustrating experience, one where the opposition is at a disadvantage. Unless New Democrat and Liberal MPs hone their questions regarding the planned sole-source acquisition of new fighter aircraft, they will find that their ability to hold the government to account over the F-35 will soon dissipate. It is time for the opposition parties to ask better questions about the F-35.

Since the Auditor General’s latest report was tabled in early April, opposition parties and pundits have been fixated on his finding that the government excluded $10 billion in operating, personnel, and contingency costs from the stated price of the F-35 acquisition. Although the government was aware of these estimated life-cycle costs, ministers chose to present only the aircraft’s acquisition and sustainment cost when the decision to buy the planes was announced in the summer of 2010. This omission has been upheld as evidence that the Conservative government lied to Parliament and Canadians about the true cost of the planned procurement.

Opposition members hoped that senior executives involved in the F-35 process might be compelled to corroborate this assessment before the public accounts committee. It did not happen.

In a determined, and at time coarse, defence of his department’s figures, the deputy minister of national defence, Robert Fonberg, insisted that presenting the acquisition and sustainment costs alone was in keeping with past practice. He suggested that these figures outline how much of the military’s capital equipment budget would be spent on the F-35s, and he rejected the claim that operating costs were purposefully hidden, since these would be presented to Parliament as part of the defence departments annual personnel and operations and maintenance budgets once the planes enter service.

When pressed, Fonberg admitted that the defence department had been told by the previous Auditor General to give full life-cycle estimate when announcing the cost of a procurement. Yet he went on to say that, given the uncertainty involved in projecting future personnel and operating costs, the defence department is still preparing a novel methodology to calculate these costs.

Opposition MPs were obviously unimpressed by Fonberg’s explanation, but they were poorly placed to challenge the deputy minister. Backed by his fellow officials and the Conservative members of the committee, he asserted that the Auditor General’s findings were either flawed or misunderstood, as were those of the Parliamentary Budget Officer. Lacking the information and expertise required to offer a stronger retort, the opposition parties have thus fallen back on their initial charge that the government simply lied about the full cost of the program.

It is unlikely that opposition MPs will make greater headway if they continue focusing on this line of attack. While they may be convinced that the Conservative government was dishonest about the cost of the F-35, the issue has quickly become a morass of conflicting definitions, precedents, and assumptions. At best, the opposition will be able to prove that the government “managed the truth,” as one newspaper editorial put it.

In the meantime, other critical problems surrounding the F-35 procurement will be largely ignored or forgotten. The core findings of the Auditor General’s report were that the defence department and Canadian Forces failed to properly justify a sole-sourced procurement of the F-35, underestimated the likely acquisition costs and developmental risks associated with the aircraft, and were unclear about the value of the contracts the Canadian industry could win as part of the multinational Joint Strike Fighter consortium.

If these issues are not properly addressed by the opposition, the executive will not be effectively held to account and those who acted inappropriately may feel that they can continue to flout proper procurement procedures with impunity.

The key question that must be asked is why the F-35 is the only possible future fighter aircraft for the Canadian Forces, on what grounds the air force makes that claim and based on which defence policies and priorities. The Canadian military lacks many capabilities that larger powers possess; the Canadian Forces are not equipped to meet every possible threat or eventuality. Why was it judged absolutely necessary for the military to have a this particular aircraft and to write a statement of requirements that excluded any alternatives? Why were trade-off considerations and cost-benefit analyses not entertained in this case? How does the defence department explain the Auditor General’s finding that due diligence was not performed when addressing these concerns? And the most important question: did the defence minister or Cabinet allow the department to brush aside its duty to perform this due diligence?

Now, assuming that the F-35 best meets the military’s preferences, why was a competition not held? If the Joint Strike Fighter was without a doubt the superior plane, why not hold a transparent competition that would make this obvious to parliamentarians, stakeholders, and Canadians at large? The fact that there is still no contract for the F-35 indicates that there would have been ample time to hold a competition. It is also worth noting that a transparent competition would likely have produced far clearer information about the acquisition and life-cycle costs of different aircraft, including the F-35. Simply put, a competitive process would have provided the figures the opposition and officers of Parliament have been struggling to obtain since 2010.

It is imperative that the opposition turn toward these larger concerns now. A new secretariat is being created by the government to oversee the procurement of Canada’s next fighter aircraft. This secretariat will be mandated to oversee the acquisition process and provide Parliament with clearer information and costing estimates. Once the secretariat is in place, it should therefore silence the accounting debates by making all relevant estimates available to parliamentarians and the public.

Unless the air force is told to write a new statement of requirements and a fair competition is held, however, the secretariat will essentially be tasked with overseeing an acquisition of the F-35. As a result, the due diligence questions will remain unanswered, and the Auditor General’s main findings will have been ignored.

Before it is fully established, then, the opposition parties are advised to move beyond the life-cycle cost issue and ask more fundamental questions about how the F-35 was selected, why a competitive process was avoided, and who within the executive was responsible for these decisions. Parliament’s ability to hold the government to account during the next stages of the fighter aircraft acquisition process depend on it.