Orange crash: How the NDP fell back to third

'This election was about change,' Tom Mulcair told supporters. But in the contest to be the change, the NDP finished second. 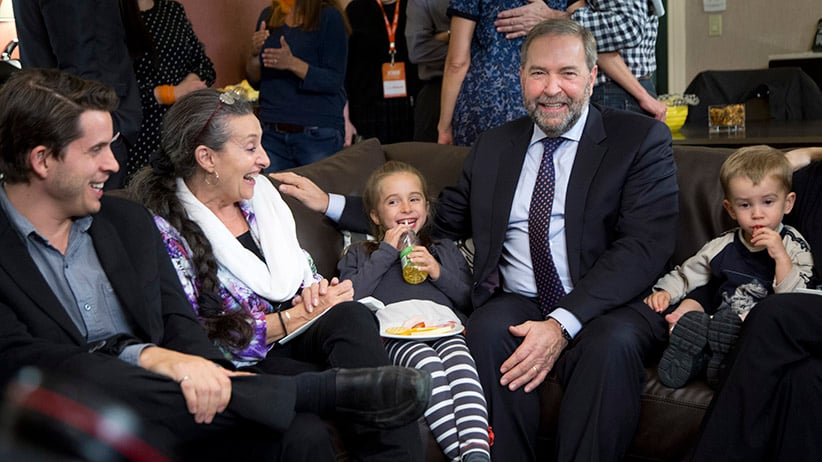 Thomas Mulcair watches election coverage with wife Catherine Pinhas and their grandchildren, and family at a hotel in Montreal, Monday October 19, 2015. (Photograph by Vincenzo D’Alto)

Twenty-two-and-a-half hours after the House of Commons had begun voting on the first portion of 871 opposition amendments to Bill C-38, the first and most inflammatory of the Conservative majority’s omnibus budget bills, the NDP caucus was setting aside decorum and sending a message. This was not over. There would be a reckoning. And the insurgents were banging at the door.

That reckoning for the Conservatives did come. But it was not the New Democrats who overran the governing party. Instead, there was quiet in in the room at the Palais des Congres in Montreal as a smattering of NDP supporters watched at quarter to ten as the networks quickly declared the impending arrival of a Liberal government. For the second time in four years, there was a once-in-a-lifetime swing in the electorate. And as quickly as the orange wave had swept in, it went back to sea.

“This election was about change,” Tom Mulcair said at a half hour to midnight as he took the stage to address teary-eyed supporters in a hall that was something less than half full. He seemed, understandably, to be straining to smile.

This election was indeed about change. And this election brought change. But in the contest to be that change, the NDP finished a dismal second. And so it is, once again, the third party.

An NDP government, the first NDP government in Canadian history, was plausible as recently as six weeks ago. Even this afternoon it was possible to imagine 80 New Democrats elected and holding the balance of power in a hung parliament. This, instead, was something like the worst case scenario. This was, from coast-to-coast, a wipeout.

All NDP incumbents in Atlantic Canada were defeated. In Quebec, the orange team was reduced to 11 seats from the astonishing 59 it won in 2011. In Ontario, just eight New Democrats won their ridings, less than half the total in 2011, and with a scant 16.6 per cent of the popular vote. Not a single New Democrat was left in downtown Toronto, with Liberal candidates winning Jack Layton’s old riding of Toronto-Danforth and defeating Olivia Chow in Fort York-Spadina. Potential breakthroughs in Edmonton and Saskatoon failed to materialize. The tally of significant NDP MPs that won’t be returning to Ottawa is long: Megan Leslie, Peggy Nash, Paul Dewar, Jack Harris, Nycole Turmel, Francoise Boivin, Peter Stoffer, Pat Martin. (Among the New Democrats to win re-election was none other than Ruth Ellen Brosseau.)

The giddy number of New Democrats sent to Ottawa by the wave of 2011—famously including four McGill students and one bar manager who spent part of the campaign in Las Vegas—had turned out to be a formidable opposition, aided certainly by the freedom to oppose that a majority government allows, but still also feistier than the Liberals had generally been. Within weeks of the House reconvening, they filibustered legislation meant to force mail carriers back to work. Next was the fight over C-38, then another fight over another omnibus budget bill, C-45. They fought the Fair Elections Act with nearly every procedural gambit available. They loudly and proudly opposed C-51, the government’s anti-terror bill. They held together and generally stayed out of trouble—avoiding the defections or gaffes that might have been predicted.

They lost their cherished leader, Jack Layton, to cancer, just months after the 2011 result. But their new leader, Tom Mulcair, was formidable—”Stephen Harper Has Finally Met His Match”, this magazine declared in the fall of 2012. Square-shouldered, bearded and quick to speak, he made his name—”the best opposition leader since John Diefenbaker” according to Brian Mulroney—as an unrelenting bother, squaring up to the Prime Minister, leaning forward, staring downward and famously prosecuting the matter of Mike Duffy with dozens of simply-stated questions.

“In addition to being regarded as the most vibrant analytic mind in the House of Commons, the most decisive debater, the leader of the opposition who can confront and subdue the prime minister on a daily basis, Tom Mulcair is, according to my reading of the polls and surveys, seen as the most trusted of the leaders. … Seen as a leader who can manage the economy, seen as the leader who can be prime minister,” Stephen Lewis gushed at an NDP announcement in Toronto just less two months ago. “In the history of the democratic left, we’ve never had that compilation of attributes simultaneously vested in our leader.”

This then was a moment, an opportunity. But to be a New Democrat in late August was about as good as it would get.

Lewis said something else that day that seemed to ring true. “The yearning for change is in the air,” he said, “and the NDP is the embodiment of that change.” But for two developments, that might have been the one-sentence summation of this campaign. First, in the fall of 2012, Justin Trudeau declared his candidacy for the leadership of the Liberal party. Second, in the fall of 2015, the Federal Court of Appeal ruled against the government of Canada in the case of Zunera Ishaq, the Toronto woman who wished to swear the oath of citizenship while wearing a niqab. The former presented another embodiment of change. The latter presented the NDP with an unfortunately timed wedge issue to navigate.

Just a few months ago, the shine seemed to be off Trudeau the younger. After a year and a half in third place, the NDP had again, much as in 2011, risen up precipitously. But in the early weeks of the campaign, the Liberals came back aggressively against the tag of “not ready” and then they dared allow that they would run the federal treasury at a deficit for a few years so that they might invest in the future. That was a commitment the NDP couldn’t, or at least wouldn’t counter: for a New Democrat to allow for deficits might have only confirmed the worst preconceptions of what an NDP government would be.

(Side note: The notion that the Liberals succeeded by running “to the left” of the NDP doesn’t quite scan. Even if choosing to balance the budget might be regarded as more “fiscally conservative” than the alternative, the NDP platform could fairly be described as decidedly progressive, with its fretting for child care, the environment, the federal minimum wage and corporate taxes.)

Then the Federal Court of Appeal ruled in Zunera Ishaq’s favour. Mulcair might not have been able to support the government’s preference for a ban on the niqab during the citizenship oath with a straight face and his personal integrity intact, but with his decision to defer to the courts and criticize the government’s politicking, his party lost a dozen points in opinion polls of Quebec.

With that, what had become a three-way tie began to break. If you were a voter hoping to see the Conservatives defeated, it suddenly became apparent that the Liberals were the party most likely to do it. Up went the Liberals, down went the NDP.

With 19.7 per cent of the popular vote, the federal NDP is nearly returned to the share of the vote it received in 2008. By that measure, this would not even be the second-best result in party history, ranking behind what the NDP managed under Ed Broadbent in 1980 and 1988.

There could be—or should be—some pride in what New Democrats managed these last four years. They might even tell themselves that they contributed to what happened tonight. That, as Her Majesty’s loyal Opposition, they contributed to the change that has come. But then the spring of 2011 might have otherwise signalled an end to the idea of an NDP that had to content itself with moral victories. And the summer of 2015 held the promise of monumental change in the political order.

“As a party with established roots in all corners of this country, and deep roots right here in Quebec,” Mulcair concluded, perhaps a little hopefully, “the next chapter begins in our effort to build a better Canada.”