The price is right! Stephen Harper pulls out all the stops.

In a hotly contested GTA riding, the PM called in some controversial power players 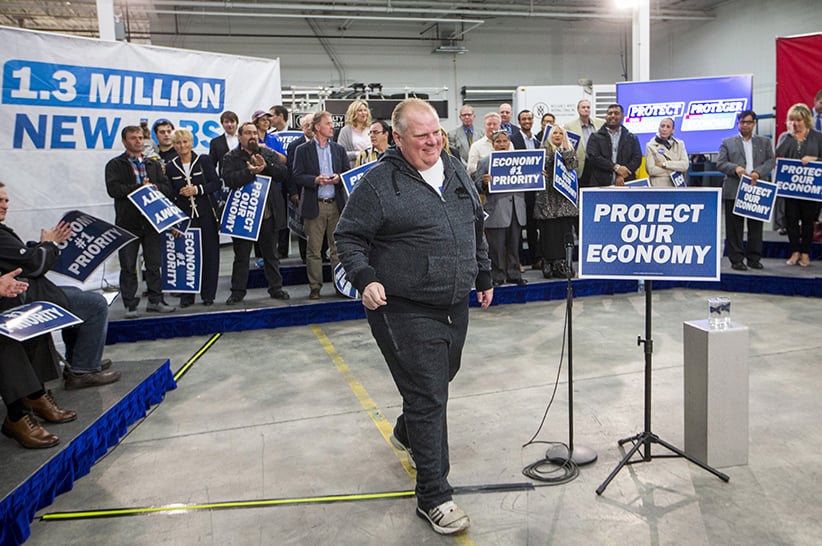 There’s a fine line in politics between cunning and desperation, but, for Stephen Harper, they are not mutually exclusive attributes; the man plays best with his back to the wall (see: 2008 prorogation). So Conservatives may look kindly on their leader’s Tuesday-morning appearance in western Toronto, featuring both members of the Brothers Ford. They are, after all, the plus-sized princes of Etobicoke, a hotly contested swath of the GTA, and here, the value of their endorsement remains undiminished. A party might win Etobicoke–Lakeshore without the Ford stamp of approval. But it’s a lot easier to win with it.

Doug Ford entered first, glancing about the hangar-like facility housing a company that supplies lighting equipment to the entertainment industry. The former city councillor then made a beeline for the media corral, where he unleashed a mostly on-message screed linking Liberal Leader Justin Trudeau to Kathleen Wynne, the premier of debt-laden Ontario. Asked why Harper was pulling nothing like the adoring crowds Trudeau does, Ford said: “If the Prime Minister wanted thousands of people, we can have thousands of people. At Fordfest [the family’s annual barbecue], we had 5,000. We could easily create the crowds. But the message resonating with the Prime Minister is the economy, economy, economy.”

Then came Rob, all squints and waves, shambling along in the hoodie he’s been wearing since his successful operation to remove cancerous growths in his abdomen. From a hand-picked crowd of local federal Tories, he drew a cheer near as loud as the PM’s.

The Harper tour had chosen this setting to continue its attack on Trudeau’s business-tax policy. Lighting and grip supplier William F. White Inc. is just the sort of firm, they say, that will be hammered by the Liberals’ proposals to raise CPP and Employment Insurance premiums. Harper then turned to a piece of theatre he’d first tried over the Thanksgiving weekend, inviting a small businessperson—in this case, the owner of a pizzeria—to tote up his annual losses, should the Libs come to power. Clad in western-cut trousers and open-necked shirt, Harper played ringmaster with an air of triumph, perhaps because he was standing on hallowed ground. Etobicoke–Lakeshore was the scene of one of the Tories’ biggest upsets four years ago, when their candidate, Bernard Trottier, knocked off Liberal leader Michael Ignatieff and sent him packing from federal politics. It’s the conquered frontier of their Ontario breakthrough.


Still, the Fords’ presence was not a given. As Rob’s mayoralty dissipated last year in a puff of drug smoke, Harper appeared to distance himself, taking a much-discussed meeting with the Fords’ centre-right rival, John Tory, in the middle of the campaign. Tory went on to win, and the Fords did little to endear themselves to a Prime Minister who’d once paid them the honour of attending their annual barbecue. In late August, with the Conservatives flagging in the polls, Rob Ford told reporters his brother would likely run for Harper’s job if the Conservatives lost he election. Far from dousing the story, Doug said, “I never say never in politics,” before hastily adding: “But, as of right now, I am supporting the Prime Minister 100 per cent.”

But, as they say in show biz, bygones. With Ontario’s progressive vote coalescing around him, Trudeau has in recent days turned his sights on the province’s so-called “soft” conservatives, triggering an all-hands-on-deck call among bedrock Tories. So Rob Ford kept a humble profile on Tuesday in his front-row seat, while Harper, doing his best Monty Hall, counted up the hypothetical dough lost by pizzeria owner Dino Ari with the onset of Trudeaupia 2.0. Doug gonged joyfully on federal talking points, telling reporters that Trudeau wishes to replicate the “absolute disaster” Wynne’s Liberals have inflicted on Ontarians over the past two years.

The only discernible wobble came when he was asked what he would do differently from Harper if he were running the campaign. The preferred answer? “I’m not running the campaign. Next question.” Instead, Ford said: “I wouldn’t do anything differently. I think the Prime Minister is doing a great job”—leaving open the notion that he could imagine himself in the role.

A nuance, to be sure, but a conspicuous one, given Rob’s past remarks, and precisely the sort of thing that make the Fords as difficult an ally as they are an enemy. For them, especially in the principality of Etobicoke, the rules are a little different.