The problem with Maryam Monsef's contempt for metrics

Monsef's 'math is hard' moment is an odd position for a cabinet minister in a proud science-friendly, evidence-based party to be taking 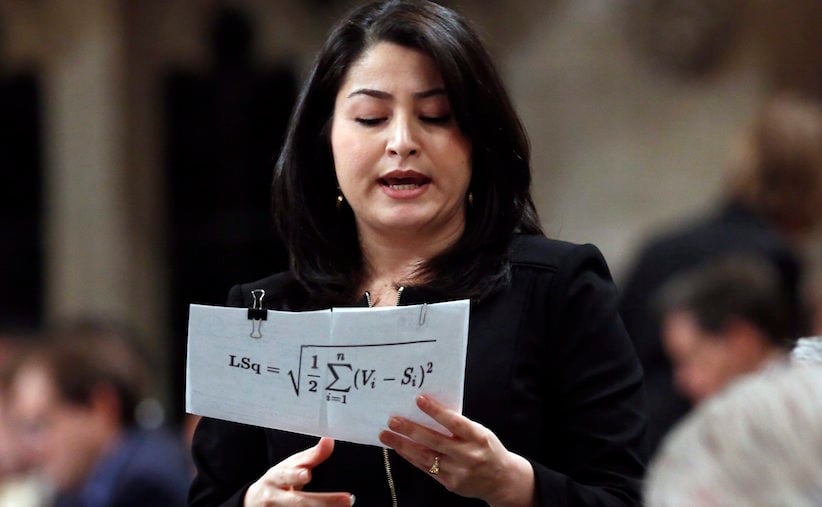 On Thursday, Dec. 1, Minister of Democratic Institutions Maryam Monsef addressed the House of Commons to comment on the Special Committee on Electoral Reform’s long-awaited report. Alas, if the committee members expected Monsef to show appreciation—or even recognition—for the culmination of six months of work, they were to be disappointed. “[The committee] did not complete the hard work we had expected them to,” Monsef lamented, drawing boos from the House. She expressed dismay that the report’s authors had failed to provide “a specific alternative system to first past the post”—despite that not being part of the committee’s mandate—and that Canadians were being asked to “choose our own adventure”. And while the report spanned a formidable 348 pages, Monsef devoted nearly half her remarks to a mathematical formula on page 323 called the Gallagher Index, which measures how closely the composition of a government matches the proportion of votes received by each party: “Would Canadians like to take the square root of the sum of the squares of the difference between the percentage of the seats for each party and the percentage of the votes cast?” she asked. Her answer was implied.

Monsef has since walked back some of her remarks, saying that when she said that the committee had not completed the hard work they were expected to, she in no way meant to imply that the committee members had not worked hard. She did not, however, apologize for dismissing the committee’s use of mathematics to compare systems of counting votes. A year and a half ago, the late Jim Prentice, then the premier of Alberta, lost a provincial election to Rachel Notley for sneering, “I know math is hard”. Last week, the youngest female member of Justin Trudeau’s gender-balanced cabinet delivered the same message to the entire country. (Notley’s math, by the way, was correct; Prentice’s was wrong.)

Monsef’s comments on the Gallagher Index – as well as the commentary surrounding them—are telling. Against House rules, Monsef displayed an enlarged printout of the formula to drive home her contempt for its inclusion in the report: what sort of nerd understands that? Seasoned political reporters uncritically described the index as “complicated”. It’s actually simple enough to explain on Twitter, as I did on Thursday night. I can do it again now, with room to spare: for each political party, subtract the percentage of votes received by that party from the percentage of seats it has in the house. Then take the squares of each of those numbers, add up the results, divide the whole thing by two, and take the square root of all that. That’s the Gallagher Index. The reader might have to grab a pen and paper in order to get the full effect; but certainly, this is an easier concept to grasp than any of, say, health care policy, transportation, or environmental regulations, each of which Canadians vote on all the time.

RELATED: The circular logic and mixed messages on electoral reform

But what does it mean? The report explains that as well. “Perfectly proportional” elections—ones where each party receives the same percentage of seats as votes—have Gallagher Indices of zero. The less representative a system of government, the higher the Gallagher Index, to a maximum of 100. The Special Committee on Electoral Reform recommends that Canada adopt a voting system that will give scores of five or less on the Gallagher Index, a position supported by organizations such as Fair Vote Canada and Leadnow.* For comparison, the 2015 federal election gave a score of just under 12.

Of course, proportionality, as measured by the Gallagher Index, is not the only consideration in selecting a voting system; for instance, regional representation can’t be ignored in a country as large as Canada. To their credit, the committee members recognize this. But while Monsef has been upfront about not favouring proportional representation, her beef with the Gallagher Index isn’t that it only measures proportionality. Her beef with the Gallagher Index is that it’s math, with its sums of squares and square roots and symbols that are literally Greek. This is, to be sure, an odd position for a cabinet minister in a proud science-friendly, evidence-based party to be taking.

It is also a troubling one. Asked repeatedly how the government intends to actually select a new voting system, Monsef offered only vague comments about “enhancing the culture of engagement”. “Engagement” has been a major theme in Monsef’s short tenure. It is also a quality that is notoriously difficult to measure. Perhaps that is a feature rather than a bug: at the intersection of “affinity for engagement” and “contempt for metrics” is fertile breeding ground for leaders who wish to make up their own rules. “I have not yet heard a consensus around one system or another,” wrote Monsef at the end of a summer of engagement, as though she hadn’t anticipated that twenty-five million registered voters would fail to come to an agreement on the subject. Monsef is committed to finding the “best” electoral system to replace first past the post, but she has rejected every systematic method of determining what’s best. The Minister who slammed a committee for inviting Canadians to “choose our own adventure” has been taking us on an adventure whose itinerary she seems to be making up on the fly; it will end when she’s ready, and not a moment before.

Perhaps it was inevitable, then, that we would find ourselves drifting toward the conclusion Monsef had worked so hard to avoid: a referendum on electoral reform. At least that method of determining the best system is simple: you hold a vote, you count the ballots, and the option with the most votes wins. Technically, counting is math, but at least it’s easy math; not a Greek letter or a square root in sight. Surely, even a bunch of Canadians can manage that.

Brenda Fine is a math instructor at the British Columbia Institute of Technology. She can be reached on Twitter at @moebius_strip

CORRECTION, Dec. 4, 2016: An earlier version of this article stated that Fair Vote Canada and Leadnow favour a purely proportional system with a score of zero. That is not the case.