Michael Chong has earned jeers and plaudits over his carbon-pricing plan. One problem: It might just be a waste of time. 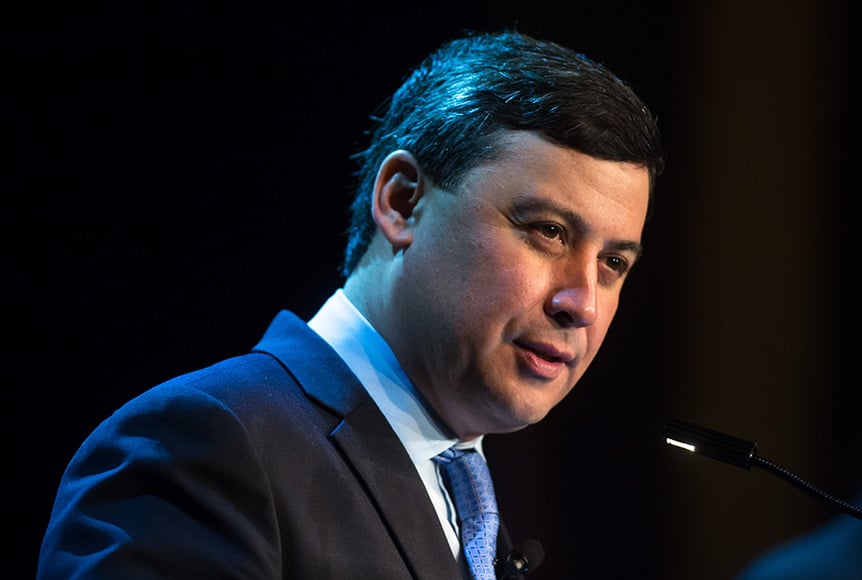 Spare a thought for poor Michael Chong. The MP for Wellington–Halton Hills stands alone in a crowded Conservative Party leadership field as the only candidate proposing a conservative approach to pricing carbon.

Despite his best efforts at making a carbon tax more palatable to the Tory membership—couching the climate talk in plenty of tax-and-red-tape-slashing rhetoric—the boos and jeers have only grown louder with each leadership debate.

But at least his self-described “credible, market-based, conservative solution to reduce emissions” has earned accolades from the likes of former Harper PMO policy director Mark Cameron, who praises it as “the most dramatic climate policy and tax cut plan to be put on the table by any federal party or politician.”

Curiously, Chong’s list includes the ecoEnergy Innovation Initiative, which ended last year; the Clean Energy Fund, which ran from 2009 to 2014; and the ecoEnergy for Renewable Power program, the final contribution agreements for which were signed on March 31, 2011.

Indeed, such is his zeal to stop the green gravy train that Prime Minister Chong would somehow retroactively veto the Green Municipal Fund, an endowment to which the federal government has not contributed since 2005.

Never mind. Surely those wasteful green subsidies are hiding somewhere. The point of this white paper is to simplify the tax code, after all: A $14.9 billion cut to personal income tax (including a 4 per cent cut for top earners), a $1.9 billion cut to corporate tax, and the elimination of “half of the $22.9 billion in tax expenditures identified by the Fraser Institute.”

That’s right! No more using the tax system to pick winners. So which of these decadent tax expenditures would a Chong government cut first? For some reason, the only one mentioned by name is the Accelerated Capital Cost Allowance (ACCA) for Efficient and Renewable Energy Generation Equipment, along with “any other GHG related ACCAs” (perhaps there are too many to list).

Fair enough—the cost of solar PV generation has fallen by over 50 per cent since 2011, so maybe it’s time for Canada’s Efficient-and-Renewable-Energy-generating fat cats to pay their fair share of taxes. But why stop there? Why not pledge to cut, say, the ACCA for Liquefied Natural Gas Facilities? Or the Foreign Resource Expense deduction? Or the Canadian Exploration Expenses deduction? Or the Canadian Development Expenses deduction?

If Chong is truly serious about reducing Canada’s greenhouse-gas emissions, eliminating direct subsidies and tax incentives for fossil fuel production would be an important first step, and one well aligned with his professed free-market orthodoxy.

But absent a robust and well-funded plan to ease the transition to non-emitting energy sources, the impact of Chong’s proposed carbon tax and revenue recycling regime on end-use sectors (transportation, heating, etc.) would be negligible at best.

“The family commuting to their job cannot move or find a new job closer to home: they will just pay more,” declares Chong’s Conservative leadership rival Erin O’Toole in his recently released environmental platform, which vows to immediately repeal any federal carbon price and end the “Liberal jobs crisis.”

“The senior heating her home cannot put solar panels on her roof or wear a second sweater: she will just pay more.”

And O’Toole is not wrong: The only way a carbon tax reduces emissions is if it changes how people and businesses use energy.

To be sure, Chong deserves credit for the courage of his convictions. In a leadership race where his opponents are unwilling to even acknowledge the threat of climate change, he is appealing to an ostensibly conservative ethic of personal responsibility and proposing that something be done. But while penalizing energy users for their carbon emissions might encourage some modest efficiency improvements in the short term, these gains will be far from transformative.

That’s why federal programs that fund energy efficiency upgrades to buildings and industrial equipment, improved public transit and electric-vehicle charging infrastructure, clean energy research and development, and yes, even solar panels, are an absolutely essential part of the transition to a low-carbon economy.

Far from being an effective plan to combat emissions, Michael Chong’s proposal to eliminate these federal programs, take money away from energy consumers through a carbon tax, and then give it right back to them through income tax cuts wouldn’t even be an effective cash-grab. It would just be a waste of time.

Nicholas Gall has worked as an environmental policy analyst at the the International Energy Agency and Ducks Unlimited Canada, and as a communications adviser at ​the Green Party of Canada from 2013-14. He is based in London.