The project to fix Canada gets underway

Politics Insider for Nov. 26: Liberal appeasement of China is back, Freeland tries to mend western fences and Doug Ford offers his services as unifier 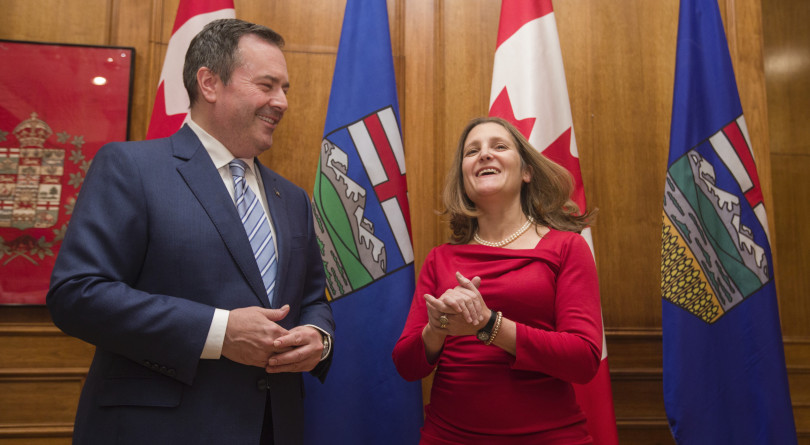 At the global security gathering in Halifax — up the down escalator: Over the weekend top defence officials from around the world gathered at the annual Halifax Security Forum to discuss the big threats of the day. Paul Wells attended the anxiety-inducing confab and writes that one fear above all others lurked in the back of attendees’ minds:

The thought I heard most often over coffee or lobster rolls at the Westin Nova Scotian, during breaks from the official program, was this: What if Donald Trump wins next year’s U.S. presidential election?

By the time the Halifax regulars gather again, at this time in 2020, the winner of next year’s election will be known. If it’s not Trump, great, the world can get back to its usual level of chaos. If it is—well. “Europe will say, ‘You’ve seen this guy. You know what he’s like. And you still want him?’” one conference participant said. Read more ››

China dominated public discussions at the Halifax forum. The weekend also brought fresh revelations, courtesy of documents obtained by the International Consortium of Investigative Journalists, about Beijing’s mass detention of Muslim minorities in northwest China. The revelations have put a renewed spotlight on China’s 13-year detention of Huseyin Celil, a a former Uyghur activist and Canadian citizen.

Ottawa goes meek and gentle with Beijing: A strong response from Canada to China’s actions in Hong Kong seems ever more unlikely, writes Terry Glavin. After months of dithering, the Trudeau government has retreated into the Liberal Party’s traditional approach to relations with Beijing—”appeasement, capitulation, and normalization”:

Hongkongers certainly do. So do the Uighurs of Xinjiang, a Muslim people whose persecution has accelerated to the point that at least a million of them are confined to concentration camps and forced-labour zones laid bare in the greatest detail yet in a trove of leaked Chinese  government documents just released by the International Consortium of Investigative Journalists. So do Tibetans, whose dispossession and oppression over the past seven decades is now being replayed in Xinjiang—and whose tragic predicament, once a hallowed cause in Canada, is now rarely if ever even mentioned in polite company. Read more ››

Scheer goes east: With the departure of two of Andrew Scheer’s top aides over the weekend, and the expiration of his campaign manager Hamish Marshall’s contract, the Conservative leader is taking stock after his disappointing performance in last month’s election. He ventured to Montreal on Monday to hear out a group of 75 candidates and campaign managers in the province who the Toronto Star reports are furious with how his team managed the campaign there.

Freeland heads west: Meanwhile Chrystia Freeland, fresh into her role as Canada’s new intergovernmental affairs minister, made her way to Alberta yesterday to meet with Western leaders, including Premier Jason Kenney, and attempt to find “common ground.” The pair, who struck a cordial tone in front of reporters, had plenty to talk about — Kenney released the federal wish list he took into his meeting with Freeland, including a guaranteed completion date for the Trans Mountain pipeline,  a $1.72-billion equalization rebate and funding from Ottawa for the reclamation of abandoned oil and gas wells. Today Freeland is scheduled to meet Saskatchewan Premier Scott Moe.

Among the issues on Kenney’s agenda was the week-old strike by CN Rail workers, which is forcing chemical companies to ready layoff notices and hitting agricultural producers hard. Kenney, along with a swath of industry leaders and political leaders, including Quebec Premier François Legault, have been united (How about that for a change?) in calling on the Trudeau government to recall Parliament early and pass back-to-work legislation — something which Trudeau’s ministers have refused to do in favour of allowing the collective bargaining process to run its course.

From the files of “Unlikely champions of national unity”: One consequence of the railway strike is a looming shortage of propane in Quebec and eastern Canada. Calgary-based Pembina Pipeline Corp. pledged to help in the name of national unity by shipping propane to parts of Canada that need it. “We believe the provinces can work together in the spirit of unity to secure a safe, reliable and long-term supply of energy from each other, rather than from foreign countries who do not share Canadian values,” the company said in its release. “The best question is: why would we not?” said Chief Executive Officer Michael Dilger, without mentioning Quebec’s refusal to allow a safe, reliable and long-term supply of western Canadian fuel to cross the province via any new pipelines. Meanwhile, Ontario Premier Doug Ford vowed to use his “great relationship” with western premiers to help mend this fractured nation of ours. “I don’t know if I’d call myself a unifier, but I’ll tell you, I’m going to do the best I can to cool the waters,” he told CTV News.

Let’s hear it:: Help us better understand what you’d like from the Maclean’s Politics Insider newsletter. This short survey will only take a few minutes to complete. We really appreciate the feedback.