The public's right to know is apparently not Patty Hajdu's priority 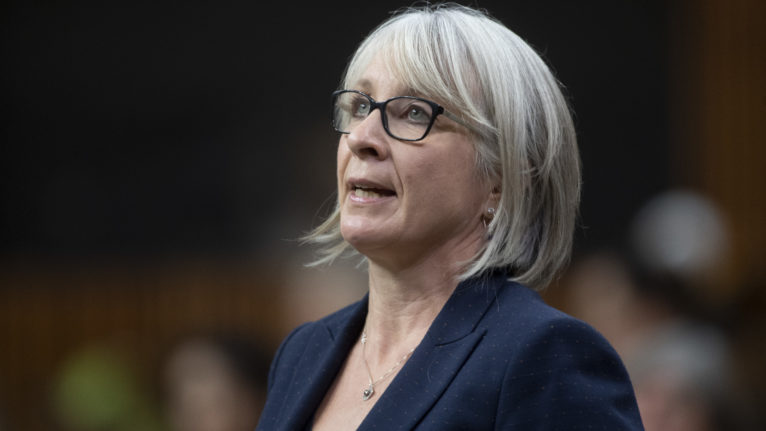 Minister of Health Patty Hajdu responds to a question during Question Period in the House of Commons, Thursday, October 22, 2020 in Ottawa. (Adrian Wyld/CP)

Sure, the Supplementary Estimates aren’t designed to excite the typical taxpayer. But when Treasury Board President Jean-Yves Duclos tables his government’s planned spending, the documents contain price tags in the billions that require parliamentary approval—a vote on new expenditures that is considered a matter of confidence. Yesterday, Duclos tabled the latest estimates. So what’s in there?

Most of those billions have already received statutory approval, which means their funding is embedded in laws already on the books. But more than $20 billion in proposed spending was voted on by the cabinet members who sit on the Treasury Board. They’re asking MPs to okay $5.3 billion in vaccine development, $2.2 billion for PPE and testing kits, $1 billion to help Alberta close and clean up orphan wells, and $760.1 million for compensation to First Nations in accordance with settlement agreements. There’s a lot more, too, including millions to “enhance the integrity” of Canada’s asylum system and help Alberta, Saskatchewan, New Brunswick and Nova Scotia phase out their coal industries. And another 22 million bucks on government advertising.

Speaking of parliamentary showdowns, Tory MP Michelle Rempel Garner tabled a motion that demanded reams of documents related to the government’s stewardship of the COVID-19 crisis. Same as her party leader’s motion earlier this week, Rempel Garner’s proposal included 28 clauses. Several of them resembled access-to-information requests likely already filed by journalists or opposition researchers. They demand, for example, “all memoranda, e-mails, documents, notes and other records relating to” a wide variety of pandemic response measures. O’Toole insisted this one, which could come to a vote early next week, isn’t a confidence motion. And it appears no such drama will play out (this time).

The public’s right to know: Yesterday, the Winnipeg Free Press‘s Dylan Robertson reported that two-thirds of federal access-to-information offices were deemed non-essential at the pandemic’s onset, and less than half are operating at full capacity. Rempel Garner half-joked to Health Minister Patty Hajdu that some of those public servants could work on her motion’s disclosure demands. Hajdu appeared to downplay the federal transparency law in her reply: “Not once has a Canadian asked me to put more resources into freedom-of-information officers.” The minister’s response might offer clues as to why Canada’s system of disclosure is, as journalists keep saying, more broken than ever before. For the record, a former commander of the Navy called for more ATIP resources.

Bids close today on the RCMP Musical Ride horse auction. One of the most competitive bidding wars is fighting over Lawman, a six-year-old Hanoverian Gelding with a “loving personality” and “potential as an upper level sport horse.” Dozens of bids late into last night pushed Lawman’s price tag to more than $25,000.

Five takeaways from the final presidential debate: Marie-Danielle Smith watched the second U.S. presidential debate just in case you weren’t keen on making it a priority. She wrote about the most important moments in the relatively subdued clash of septuagenarians—and kept a close eye on Trump’s demeanour.

Well, colour us absolutely shocked that Trump lost sight of that advice as the night went on. Although he came out of the gate much milder than in his pre-coronavirus-diagnosis performance and maintained a higher level of decorum throughout, that newfound civility frayed into the evening. By the 45-minute mark, his relatively cordial tone toward Welker—who firmly commanded the situation—became much more combative. By an hour in, he got bolder with his interruptions, and the debate began to look more like what we saw earlier this month.

Weekend voting: Stephane Perreault, the country’s chief electoral officer, is hoping the feds can tweak election laws. Perreault testified at the Commons procedure and House affairs committee yesterday, where he advocated for a two-day weekend vote instead of the 12-hour period traditionally scheduled on Mondays. He also predicted that millions more Canadians would mail in their votes. He flagged no safety concerns even with such a massive influx.

The public inquiry into the Nova Scotia shooting that claimed 22 lives in April is officially on. The feds published an order-in-council that launched the federal-provincial initiative, and named a third commissioner. Kim Stanton, a Nova Scotia lawyer who specializes in Indigenous issues, will replace Anne McLellan, the former Liberal cabinet minister who stepped down over the summer. She’ll join Michael MacDonald, the chief commissioner, and Leanne J. Fitch.

An Alberta pilot project starting next month will reduce the mandatory 14-day quarantine for border-crossers at two ports of entry: the Coutts land border crossing (check it out on Google Streetview) and Calgary International Airport. If participants test negative for COVID-19 at the border, they’ll be able to forego the quarantine “so long as they commit to getting a second test on day six or seven after arrival” at a pharmacy that’s part of the pilot. They’ll also be “closely monitored” for symptoms.

Indigenous Services Canada posted updated numbers on COVID-19’s spread in Indigenous communities. The cumulative case count as of Oct. 21 was 1,100, including 322 active cases, 72 hospitalizations and 15 deaths. The highest case count was in Alberta (386), followed by Saskatchewan (212) and B.C. (176). Federal figures say the positivity rate and case fatality rate on reserves is about one-third the rate of Canada’s general population.