The redemption of Stéphane Dion

Seven years ago, Stéphane Dion resigned as Liberal leader. Today, he joins the Trudeau cabinet as the minister of foreign affairs. 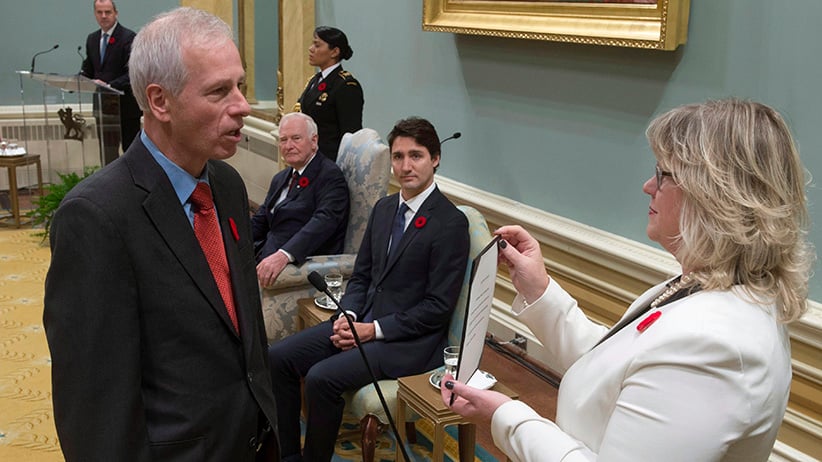 Stephane Dion is sworn in as Minister of Foreign Affairs on Nov.4, 2015 in Ottawa. (Adrian Wyld, The Canadian Press)

In the crowded aftermath of the Liberal celebration at the Queen Elizabeth hotel in Montreal on election night, awhile after Justin Trudeau had spoken and departed, Stéphane Dion was still around, looking like one of the happiest people on the planet.

Almost exactly seven years earlier, Dion had been at another hotel in Montreal for another election night, but in that case to concede defeat. Several days later he would announce his intention to resign as party leader and so, after some unexpected moments of drama, he would become just the second leader of the Liberal party of Canada to never be prime minister.

But this bright morning at Rideau Hall, Stéphane Dion, shoulders low, body somewhat slouched, stepped forward to swear the oaths of office, first in French, then in his awkwardly enunciated English, as the minister of foreign affairs. When he attempted then to sign the official documents, the pen seemed not to work, and there were chuckles at the awkward moment. Which was sort of perfect.

Amid the change, there is the comeback and redemption of Stéphane Dion.

“I do think that he’s very well suited for the job and I think that he’ll be an excellent representative for Canada on the world stage,” says Mark Marissen, who ran Dion’s leadership campaign. “I think he’ll take the job very seriously and I just think it’s great for Canada.”

“Joe Clark became a well respected external affairs minister for Canada and I am sure Stéphane Dion will do the same as foreign minister,” says Sen. Jim Munson, who travelled with Dion’s campaign in 2008. “Both were leaders. Both were given new opportunities. And that’s a good thing.”

In the official head shot distributed by the Liberals today, Stephane Dion seems to be making no effort to smile. He is a serious man—and reputedly stubborn—who has now been given a serious title and task, and the sort of stature that he was denied seven years ago. And, for good measure, he’s been named chair of the cabinet committee on the environment and climate change.

“Mr. Dion is a different kind of politician,” Justin Trudeau said of his new foreign minister seven years ago.

Dion’s winning the Liberal leadership in 2006 might be regarded now as an odd moment in Canadian political history, the great partisan machine of the 20th century turning to an awkward professor who’d finished third on the first ballot. But, as intergovernmental affairs minister to Jean Chrétien, he had fought the separatists and introduced and passed the Clarity Act. At that moment, and maybe a couple more in the subsequent two years, the former minister of the environment, a man who had named his dog Kyoto, seemed to be very of the moment; a politician seized with the greatest challenge of the day, climate change. He proceeded to stake his leadership on one of the most substantial proposals since free trade, a carbon tax—only he and his party were not well-equipped to sell it. The Conservatives would do a remarkable job of reducing him to a sad shrug and a dismissive phrase, “not a leader.” And then there was that unfortunate moment with a TV interviewer in Halifax.

The result was 77 seats and what was the lowest share of the popular vote in the history of the Liberal party. But even then there was that bewildering week that nearly made Dion the leader of a coalition government and ended with Dion addressing the nation via a late-arriving and out-of-focus home video.

Dion retreated to the backbench as the Liberals tried another different kind of politician, but he kept serving and running as the member for St. Laurent–Cartierville. Last month, in the reconfigured riding of St. Laurent, he won with 61.6 per cent of the ballots cast. It was his eighth consecutive victory, dating to a by-election win in 1996.

“This time we need to succeed. Not only because we have a much better plan than them, but because this way to do politics must be punished,” he said in 2011, speaking of the Conservative attacks that defined both him and his successor, Michael Ignatieff. “This way to do politics should not be rewarded. Otherwise, the message will be [that] everyone needs to do the same thing to win.”

Dion’s run as party leader was at least flattered by Ignatieff’s turn and then finally, in 2013, the Liberals found the right kind of different politician in Justin Trudeau, one who at least vaguely embraced the notion of a price on carbon and then transcended that way of doing politics. Stéphane Dion, in his own way, brought the Liberals to Justin Trudeau. Even more directly, it is Dion who Trudeau has credited with helping nudge him to run for public office. “Don’t go too far,” Trudeau has recalled Dion telling him in 2006, “because I’m going to want your help in getting rid of this Harper government.”

Funny how things work out sometimes.