The risky tag team of Julie Payette and Justin Trudeau

Stephen Maher: Our system relies on vice-regal distance from the government, and this week the line was blurred 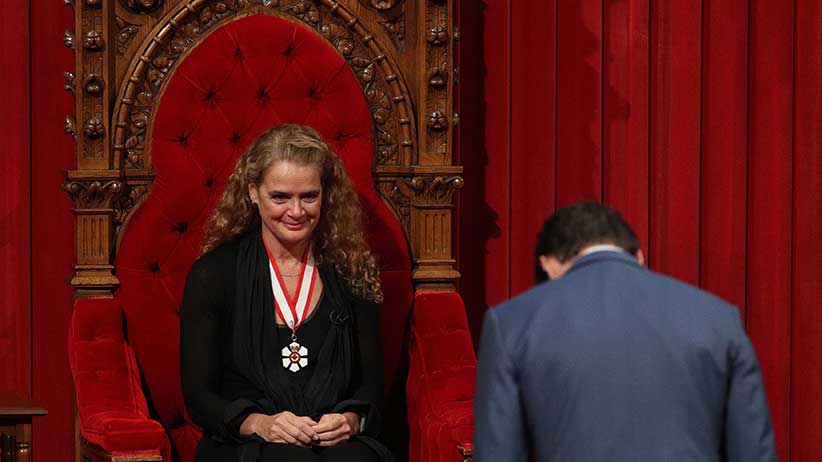 When I came to Ottawa to cover politics in 2004, I was a republican.

I believed that it was ridiculous for a particular family to have, by birthright, a constitutional role, and doubly ridiculous for Canadians to placidly put up with it. I thought we would be better off becoming a republic, that it would be a final step toward our journey to full nationhood.

Over time, watching politics up close, though, I came to believe that while there might be a better system—I like Ireland’s arrangement—as a practical matter, it’s likely not worth the trouble of changing our system, both because it would be a big project, and we’ve got more pressing issues, and because we would risk giving up something that works pretty well.

There’s one great thing about a constitutional monarchy, especially a twice-removed one, with a ceremonial Canadian standing in for a distant, powerless monarch.

Whoever takes up residence in Rideau Hall is a non-partisan embodiment of the nation, playing the role of head of state and symbolically leading our armed forces, a ceremonial but not meaningless role.

The great thing about this arrangement is that no matter how you feel about the prime minister of the day, you can be loyal to the Crown, as embodied by whomever the prime minister has appointed to the job. I know a lot of people who despised and feared Stephen Harper. They were always able to express their legitimate political views without being disloyal Canadians.

In the United States, where there is no division between head of state and head of government, they don’t have that luxury. The president is the symbolic embodiment of the nation and leader of the armed forces, so every American ought to be loyal to the commander-in-chief, even if he’s an orange demagogue who may have conspired with the Russians to get elected.

In comparison, the prime minister of Canada is just the head of a committee. Literally nothing they do is beyond criticism or shrouded in the mystical hoo-ha that invariably collects around the embodiment of a nation. They sometimes behave presidentially, and try to subtly take up the turf properly occupied by the governor general, but they can’t push it too far without someone—maybe someone in Buckingham Palace—pushing them back in line.

In order for the system to work, the governor general has to stay out of politics.

That means that they have to say things that just about everyone can agree with. Young people are our future. Education is very important. It’s past time that Canadians did more to reconcile with Indigenous people. Diversity is a source of strength. Volunteers do an awful lot of great work across this country every day.

The problem with that is that if everyone agrees with something, it’s not very interesting.

Payette is an extraordinary woman, a Montrealer with two degrees in engineering, a pilot, a deep-sea diver, a mother and an astronaut. During her second mission to space, she brought along a jersey of Maurice “Rocket” Richard. She’s amazingly accomplished, as a scientist and a leader, and there’s every reason to think that she will be as fine a Governor General as we have ever had.

Her speech Wednesday raised eyebrows, though, because of some impolitic comments about climate change and religion. She took a mocking tone, laughing about astrology and alternative medicine.

On religion, she complained that “we are still debating and still questioning whether life was a divine intervention or whether it was coming out of a natural process let alone, oh my goodness, a random process.”

And on climate change, she lamented that “still today in learned society, in houses of government, unfortunately, we’re still debating and still questioning whether humans have a role in the Earth warming up or whether even the Earth is warming up, period?”

When eyebrows went up, Environment Minister Catherine McKenna and Prime Minister Justin Trudeau defended her. They are all on thin ice here, not because Payette spoke about climate change, which she ought to do, likely every time she speaks, but because there must be distance between her and them. Her comments, and their defence, risks alienating Canadians who dislike the Liberals and are suspicious about climate change and hostile to anyone making disparaging remarks about religious faith.

If the Liberals and the Governor General appear to be part of a tag team, working over knuckle-dragging anti-science rubes, then Rideau Hall loses some of its distance from the government, which is bad. She must keep her distance.

I agree with everything Payette said, and it would be entirely appropriate for her to say it in her role as a scientist, or as a politician, but she is no longer a scientist, and she has never been a politician.

The system depends on vice-regal distance from the government of the day, so that even the most conservative conservative in southern Alberta is able to listen politely to Payette without feeling like she’s being lectured by Trudeau’s lackey.

So far, Trudeau has governed the country without alienating Westerners in the way his father did. That might change. If it does, it’s especially important that the Governor General is not too close to him.

Payette didn’t get to space, or Rideau Hall, because she shrinks from a challenge.

I predict she’ll find a better balance in the days ahead.