The roots of the Mark Norman trial

Matt Gurney: For over a decade multiple governments bungled efforts to replace the navy's supply ships. It all led to the current case now haunting the Liberals. 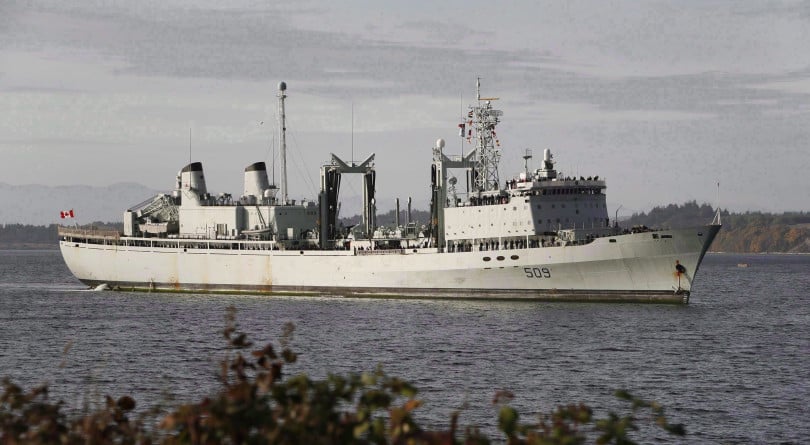 Lt.-Gen. (Rt.) Andrew Leslie is an impressive guy. He’s a former commander of the Canadian Army and currently a Liberal MP for an Ottawa-area riding. On Friday, CTV reported that Leslie, who is not running again, was willing to testify on behalf of his old friend Vice-Admiral Mark Norman—testify, that is, against the government he’s a member of.

Norman is accused of leaking government secrets to a Quebec-based shipyard, an allegation he strongly denies. The government has apparently known of Leslie’s willingness to testify for a year, and was reportedly not pleased to hear it.

It’s not surprising Leslie would choose to leave politics. It is somewhat surprising that the Liberals may soon find themselves once again taking fire on legal matters from a well-respected, highly credible member of their own caucus.

But what is absolutely surprising is just how dysfunctional and bizarre the entire story is. In a weird way, we can trace this all the way back to former prime minister Paul Martin. The story is that twisted and long.

For those who haven’t followed Norman’s legal woes, the government alleges that he inappropriately communicated with Quebec-based shipbuilder Chantier Davie Canada Inc. (Davie, for short). Davie had been selected by the Tories in 2015 to convert a civilian vessel into a supply ship for the Royal Canadian Navy.

When the Liberals won that year’s election, the shipyard was nervous, and sought reassurance. The government alleges that Norman communicated cabinet secrets to Davie, as part of a concerted effort to pressure the government into moving ahead with the project.

READ MORE: The sinking of the Canadian Navy

For Davie, this was business, for Norman, the allegation is, it was a misguided effort to get the military equipment that it needed. (There has been no allegation he stood to benefit financially in any way.) He was relieved of duty as the military’s second-most-senior officer in 2017, and charged criminally in March of 2018. His trial is due to begin in the coming months.

This was already causing problems for the Liberals. Norman is a highly respected officer with many well-connected friends, none of whom were pleased when the Prime Minister seemed to prejudge Norman’s guilt, or when Norman was denied access to a fund that helps members of the public service who are charged with crimes relating to their jobs. An online fundraiser for his legal bills, at time of writing, stands just shy of $400,000.

His defence counsel has already created some embarrassment for the government; including entering evidence that the government had done its damndest to hide the existence of documents that could aid Norman’s defence. And former Liberal cabinet minister Scott Brison, who recently (and now infamously, thanks to the SNC-Lavalin affair) chose to suddenly quit politics late last year, has drawn the attention of Norman’s defence team amid speculation that Brison was influenced by a rival shipyard to derail the Davie conversion project. (Brison denies this.)

Clearly, the trial could well turn into a damaging fiasco for the government—and it’s scheduled to begin just as this year’s federal election is getting set to kick off. And that was all true before we knew Leslie was prepared to testify.

That little summary above, though, only deals with the recent context. This has roots that go all the way back to 2004.

Most Canadians have probably forgotten the acronym JSS, but it’s at the heart of this matter. In April of 2004, the Martin government, just two months shy of losing its majority in that June’s election, announced that Canada would build three JSSs—Joint Support Ships. These ships were badly needed. The Canadian Navy then operated two Protecteur-class supply vessels, but they were 35 years old, largely obsolete, increasingly high maintenance and in obvious need of replacement.

Supply ships like the Protecteur-class are absolutely essential to modern military logistics. A naval warship can only sail as long as it has supplies. That mostly means fuel, but also food and medicines, spare parts for the engineering crew and, in wartime, ammunition for the weapons. Supply ships operate far out at sea, with the warships, keeping them in action. Supply ships also serve allied vessels, giving Canada badly needed claim to a meaningful presence on the international stage.

But the 2004 announcement was unusual. Canada wasn’t just going to replace its supply ships. It was going to procure a new kind of vessel. They would carry fuel and food and missiles for Canadian and allied ships at sea. But they would also have significant additional capabilities, which National Defence had long sought. They would be capable of sustaining a small helicopter air wing and transporting an army combat force into battle half the world away—troops, equipment, everything. The intended three vessels would have given Canada a very real ability to deploy a powerful land fighting force to any port in the world.

Critics at the time (I was one of them) were quick to note that the two jobs intended for these ships were in conflict with each other. Landing ships carry troops into active combat areas, which is the last place you want a supply ship laden with munitions and fuel. No shipbuilder in this country had any experience building such a large, complicated vessel, yet the government was adamant the work would be done in Canada. Canada would have been much better off, the critics warned then, quickly replacing our supply ships with comparable, relatively simple ships and seeking an army transport capability separately, later.

The critics were right. The JSS program became an epic disaster. Though originally embraced by the Harper Tories after they took office in early 2006, the program was deferred again and again. One does not normally turn to Government of Canada websites for a good laugh, but an exception can be made for the government’s Joint Supply Ship program page: a section dedicated to the timeline of the project lists no less than six occasions when the “revised project” received approval, spanning a period of eight years and two governments. Preliminary work began on the first vessel last year, the second may not be finished for a decade—a quarter century after the announcement.

Meanwhile, in 2014, one of our existing supply ships caught fire and had to be towed back to Canada by the United States. Also in 2014, the last supply ship was deemed too rusted to sail. Both ships were retired in 2015. Eleven years was simply not enough time for Canada to replace two ships whose replacement everyone agreed was an urgent military priority.

Now back to the Norman trial: if Canada had gotten its act together at any point in those 11 years, or if we’d just chosen a simple one-for-one replacement of our existing supply ships with comparable vessels way back in 2004, there would have been no panicked rush post-2014 to convert a civilian ship into a naval supply vessel. No concerns about the Liberals cancelling the contract. No contentious discussions with Davie. No trial getting underway just as the next election approaches.

It’s too soon to say if the Norman trial will affect the next election. But if it does, and if the Liberals pay a price, it will be an all-too-rare instance where Canada’s chronically horrific military procurement system actually results in a meaningful consequence for politicians who too-often pay no price for leaving our troops woefully under-equipped.

It’s not impossible that as he packs up his boxes in the office that’s no longer his, Justin Trudeau will pause to lament Paul Martin’s plan for newfangled naval ships Canada simply couldn’t build on time and on budget. Sometimes, simple and faster is better.