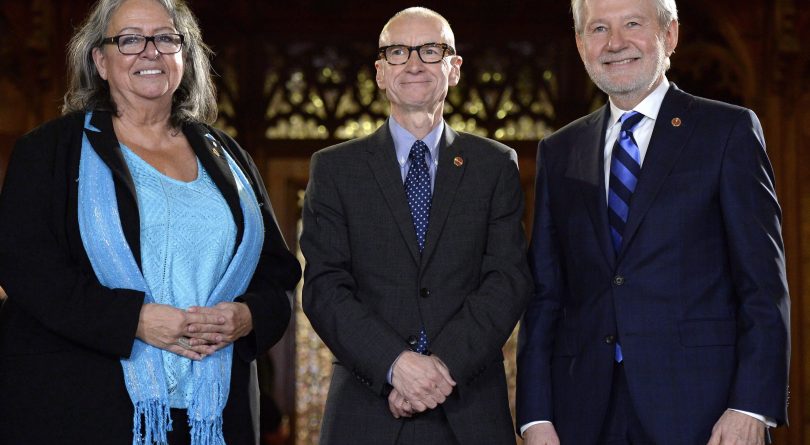 Tony Dean (centre) stands with Senator Frances Lankin (left) and Senator Peter Harder before being sworn in during a ceremony in the Senate on Parliament Hill, Wednesday, Nov. 16, 2016. (THE CANADIAN PRESS/Justin Tang)

With 30 minutes until the vote, Senator Tony Dean planted his feet on the ruby carpet of the chamber, beneath 4,400-lb. chandeliers, and scanned the gallery above for his wife. “If this bill doesn’t pass,” he said when he joined her upstairs, “it would raise some questions about the Senate’s willingness to work hard on behalf of Canadians.”

Dean, 64, is the independent senator who sponsored Bill C-45, known as the Cannabis Bill, in the upper chamber. Before a vote on Thursday night, his Conservative peers had spoken against it, and the possibility of delaying the legislation reinforced the Senate as a potential hazard to Parliament. After the Senate stalled a bill to gender-neutralize the national anthem this fall, its risk of blocking the cannabis legislation had revived criticism of the Senate as 108 seats of unelected obstruction.

However, Dean, who was appointed by Prime Minister Justin Trudeau in 2016, worked so intensely for five months to amend and pass Bill C-45 that he started dreaming about it at night, and by day lugged around a shoulder bag full of cannabis research that he shared with all senators.

Based in Toronto, formerly the head of all Ontario’s public servants, Dean is now quietly working to modernize the Senate into a body with deadlines, more organized debates and non-partisan ties. Bill C-65 passed after second reading with 44 votes in favour and 29 against on Thursday, sending the bill to five committees before its third reading. Members of Parliament are anxious to finalize the year’s highest profile piece of legislation, and Dean, devoted, plans to ensure the country’s sober second thinkers don’t cause it delay.

READ MORE: Who else will like marijuana legalization? Economists.

Dean has taught at the University of Toronto’s School of Public Policy and Governance and has written for the Toronto Star and the Guardian. He worked as a deputy minister in the Ontario government and lead the provincial public service, and after applying for the Senate, he was saddened to see partisan politics at play. “I guess I didn’t expect to be heckled when I stood in the chamber when it was my turn to speak,” he says. “I didn’t expect to be criticized as pandering to the Prime Minister.”

Trudeau doesn’t speak to Dean, the senator says. “Since he called me 15 months ago to ask me to join the Senate, I have seen him once at a dinner that he invited senators to of all political stripes.” He adds, “No nudges, phone calls, hints, messages passed by staff of any sort in the last 15 months. Nothing. Silence.”

In 2017, Dean decided to sponsor Bill C-45. “I am not a cannabis user, and that’s okay,” he says. “This is a massively important bill. It’s up there with medical assistance in dying.” When working on the assisted dying legislation that became law in June 2016, the Senate was under pressure from a 2015 Supreme Court decision. “They calendar-ized their debates. They organized their debates into themes. They brought TV cameras into the Senate. They programmed their time and activity,” Dean recalls. “My first overture to senators was that we should use the same sort of process we did for medical assisted dying for [Bill C-]45.”

Dean sits on the Senate Committee on Senate Modernization, and he’s started his own system of information-sharing among colleagues. His office created a research database on cannabis, including commissioned reports from the Library of Parliament. He sent a bibliography of the database to all senators, with an offer to deliver any of the documents upon request. He recounts staff saying, “Well this hasn’t been done before.”

Dean keeps significant volumes of literature and press clippings in a bag on his own shoulder. “I’ve just got this big thick wad of papers,” he says. “It goes with me everywhere.” (His bag also contains a toothbrush and toothpaste—“we eat lots of cheese and crackers”).

The reading material didn’t convince Conservative Senator Pierre-Hugues Boisvenu. “Pot is a piece of shit,” he says outside the chamber, after the vote. He describes his friend’s son who was a 21-year-old student at the Université de Montréal when he smoked a single joint. “Now he’s 36, at home, impotent. He’s on the rocking chair all day, so when they tell us that pot is not dangerous, I will bring people to that house and see that kid.”

During the vote, a cluster of 28 senators voted nay, with a 29th from Mike Duffy, who is now an independent and stood in the corner opposite the Conservatives. Dean sat twisted in his chair to face the front of the chamber, having done all he could think of to support the bill. Hours earlier he’d sent a report by the Centre for Addiction and Mental Health to every senator’s office. For advice on youth self-medicating with cannabis, as he told the Senate in his speech Thursday night, he’d searched the research, searched the country, and he had searched his soul.