Michael Chong and the Revolution

The sketch: 'Mr. Speaker, this bill is based on some very old ideas' 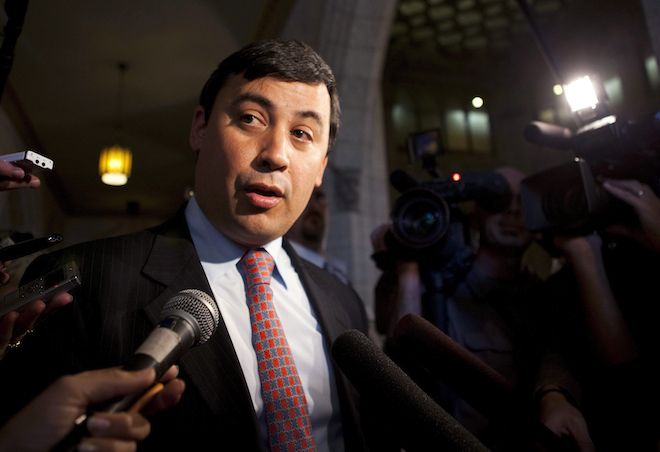 It was, it must be said, not much of a cri de coeur.

Shortly after 10am, during the time reserved for the introduction of private members’ business, the Speaker stood and informed the House of Commons that before it would now be tabled something to be considered. “Mr. Chong, seconded by Mr. Rajotte, moves for leave to introduce a bill entitled An Act to Amend the Canada Elections Act and the Parliament of Canada Act (reforms),” the Speaker explained. “This motion is deemed adopted.”

He then called on the honourable member for Wellington-Halton Hills.

“Thank you, Mr. Speaker. I have the honour to present my bill. A bill that would strengthen the principle on which our democratic institutions in Canada were founded. The principle of responsible government,” explained Michael Chong, speaking simply and evenly. “Mr. Speaker, this bill is based on some very old ideas. Ideas that people like Robert Baldwin and Louis Hippolyte Lafontaine, a monument to whom is standing behind this Centre Block on Parliament Hill, ideas that they put forward that established the principles on which modern Canadian political institutions are based. These ideas have laid the foundations for this country and I hope that this bill, if adopted, will strengthen those ideas and allow our Parliament to flourish in the 21st century. Thank you very much.”

Mr. Chong did not then overturn his desk or set fire to the Prime Minister’s chair or throw a brick through one of the grand stained glass windows of the House of Commons. But here was revolution. Or something like it. Possibly. Eventually.

Conceivably no one who stood and posed a query during those 45 minutes did so without the consent of their party leadership. Two Conservative MPs stood and asked ministers to expound on the obvious greatness of the government. The Conservative MP for the Yukon stood and raised the matter of the trial of the mayor of London, Ontario, an individual who happens to be a former Liberal cabinet minister. Most of the MPs in attendance sat around without any chance of contributing in any particular way beyond filling out a camera frame or clapping for a member of their own side.

Partway through these 45 minutes, the NDP’s Craig Scott stood and wondered if the Conservatives would allow a free vote on Mr. Chong’s bill. Pierre Poilievre, minister for democratic reform, would not respond to the question, but he would scold the official opposition.

“Mr. Speaker, they will actually have to come a day early to rehearse how to practise a free vote,” he chided. “The NDP never has free votes. In fact, The Globe and Mail did an extensive study behind the 62,000 votes cast in this place. It found that not a single member of the NDP cast a vote against its leader in almost a two-year period. One hundred per cent of the time, the New Democrats do group think over there. They are not capable of independent thought.”

Conversely, Mr. Poilievre would gush of his own side. “On this side,” he said, “we have the most free votes and we have had the most private member’s bills passed of any Parliament in 40 years.”

If we are to have an independent-thought measuring contest, the Conservatives might indeed win, but without much to brag about. The study to which Mr. Poilievre refers did indeed find that some Conservatives were most likely to break with the majority of their partisan allies. Several Conservatives, in fact, had voted the party line a mere 99% of the time. James Bezan, the king of all mavericks, had broken with his side on a robust 1.42% of the votes—a total of seven votes out of 565.

It is not quite true, for the record, that the NDP is not capable of independent thought. Over the survey period, John Rafferty managed to differentiate himself from his party on three occasions.

There is a reasonable and worthy and necessary discussion to be had about what those votes mean and amount to and how much independence exists within the bounds of those numbers and to what degree those numbers should be, in some more perfect world, somewhat different. Such is the sort of discussion we might already be having. And unto this discussion is Mr. Chong’s Reform Act tabled.

Some five years ago, one year removed from his resignation from cabinet, Mr. Chong penned a short essay for Canadian Parliamentary Review in which he lamented variously for the state of things.

“Parliament is a living institution who permanence is not assured. It is not indestructible,” he concluded. “We must be careful not to ignore it and its problems, for one day the dam of irrelevance and frustration that Canadians feel about this institution may burst. At that juncture one can only guess what the outcome will be.”

Five years later, it would be difficult to argue that anything is much better. Probably most would agree that it is much worse. The metaphorical dam is metaphorically overflowing. And it is perhaps easier, at this point, to imagine Parliament slowly fading into complete irrelevance than ever being enlivened into the sort of grand forum befitting a modern nation of 35 million that, at least in theory, it is supposed to be.

Mark Warawa’s motion was blocked (unduly so, whichever party or parties is to blame) and he was told he wasn’t allowed to speak and Brent Rathgeber quit the Conservative caucus after his bill was amended. The Prime Minister’s Office now stands accused of editing a Senate committee’s report. Omnibus budget bills continue to be tabled and passed. Time allocation has become something like standard operating procedure—its use at least worthy of a discussion about how the business of the House is managed and negotiated. The fall economic update is now presented to luncheon audiences far away from here. The idea that the Prime Minister and his ministers might see the House as their primary means for addressing the nation seems laughable. The government and the defence department dispute the parliamentary budget officer’s right to information. Three senators were, rather debatably, suspended from the upper chamber. The partisanship is rote and unrelenting. Discipline and control remain prized above almost all else.

The Reform Act would not fix everything. At least not immediately. It would not automatically make our politics nicer or prettier or smarter. Implementing its measures today would likely not result in profound, or even noticeable, change tomorrow. It might, if passed, eventually result in some new amount of chaos.

But there is something to be said for chaos.

We should not, no matter how dispiriting the present, too easily become enamoured of change. And total chaos is to be avoided. But something must change to enliven our politics. And in the Reform Act are the sort of changes that might begin to loosen the grip of that which has our House of Commons in a sleeperhold. In empowering the caucus, we might embolden the MP. In moving the nomination process beyond the easy reach of the party leader, we might compel party members and candidates to stand on their own.

Yes, on the latter most particularly, we might invite new controversies and complications. But maybe we—the party leaders, the political operatives, the proverbial boys in their proverbially short pants, the press gallery and the public—need to let go of the idea of control.

We might allow ourselves to dream, one way or another, of a democracy in which MPs might dare to break with the party line on as much as 3% of the possible votes. We might dare to imagine that some small smattering of MPs might have blogs and might use those blogs to convey thoughts that do not necessarily correspond with their assigned talking points. We might come to accept some amount of disagreement and differentiation as the natural result of democracy in a diverse and populace nation. We might hope that such things would make it harder to get omnibus budget bills through the House, would make it more likely to have a full accounting of the government’s spending of public funds and could bring other changes to the way things work—empowering parliamentary committees and independent MPs or placing limits on the government’s ability to prorogue or dissolve Parliament.

Our politics might become less rote—the debate more meaningful, the votes less predictable, the individual MP more relevant. The House of Commons might be blessed with something more like life. And the public might see in it something more worth engaging.

The Reform Act might be, if it is properly designed and can be properly implemented, the sort of thing that could eventually bring about all sorts of wonderful things. Or it could be a bad idea. Or it could be one of a number of measures that get us there.

But we might all agree on one thing right now: we are a long way from where we could be and where, whatever we each imagine, we want to be. That surely we could have a House and a politics that are both more than what we have.