The spectre of Nigel Wright finally swoops into Courtroom 33

On Day 35 of the trial, a forensic auditor finally tackles Nigel Wright's $90,000—the money that makes this case a national concern 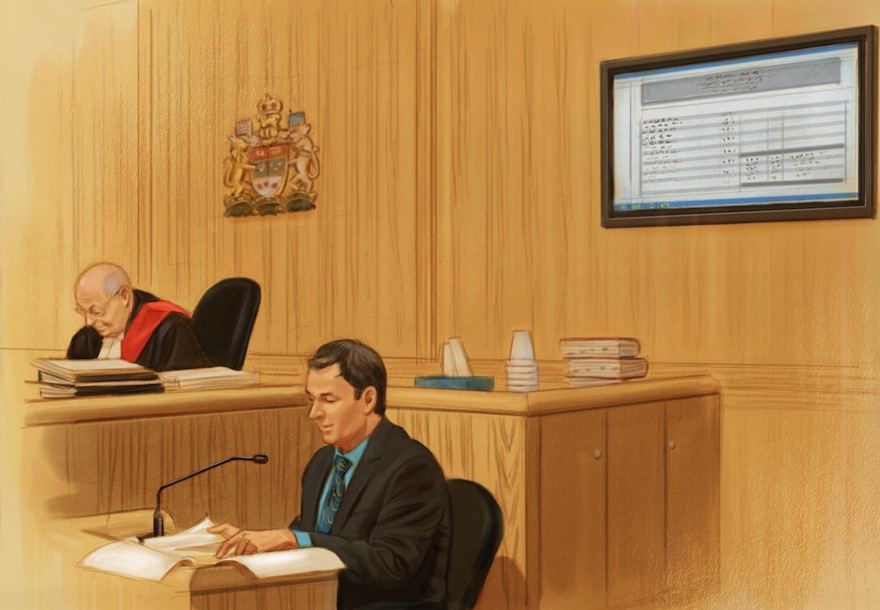 It takes just so many hours of listening to a forensic accountant trace a dollar amount from the pocket of a wealthy political operator in the PM’s office, through a law firm, through a senator’s personal bank account, then slip out and land with the Government of Canada, before you start picturing to yourself, involuntarily and with horror, the great, groaning intestinal tract of this large country. That river of slurry winds in and out of patronage, power, and scandal-management, and it stinks.

Welcome back to the Mike Duffy trial.

The forensic accountant was Mark Grenon, a salaried employee of Public Works and Government Services Canada—specifically the Forensic Accounting Management Group, a crackerjack team of number-crunchers—and if there was a hero to the proceedings today it was this utterly straightforward, unfussy, unflappable orderly of numbers.

Grenon normally oversees the dissection of bank accounts controlled by grow-op artists, loan sharks and other categories of lowlife. So there was some poetry in his presence in Courtroom 33, in Ottawa Elgin Street courthouse, where he dissected a financial transaction that led directly to the receiver general, a role played by the minister of Public Works—in other words, Grenon’s boss.

That transaction involved $90,000 that originated in a Nigel Wright’s bank account, an issue that consumed the day.

A weary breathlessness seized the court once Wright’s money arrived as a topic of inquiry, like we’d all ceased to believe in its existence, and now here it was, arrived in the form of a ghost.

Yes, there were other tidbits of interest—for example that Duffy made at least $248,000 a year at CTV, meaning he took a pay cut he could little afford when he accepted Harper’s Senate appointment.

The suspended senator’s bribery, breach of trust and fraud trial is interesting in the main because it links the Senate spending scandal that’s blighted Ottawa for the last couple of years directly to the PMO, and potentially to Prime Minister Stephen Harper himself.

The buffer between the PM and this scandal is Wright, who resigned as Harper’s chief of staff in May 2013 over the very $90,000 that Grenon has spent so long following through the shadows.

The RCMP laid the bribery charges in connection with that $90,000, the allegation being that Duffy agreed to pay taxpayers back for the travel expenses he claimed while living in Ottawa as a senator for P.E.I. only after Wright agreed to reimburse him for that massive mea culpa.

Grenon testified today during a voir dire designed in part to provide Justice Charles Vaillancourt with enough material to rule on the question of whether Grenon himself can be considered an expert witness. He walked the court through the journey Wright’s $90,000 took between Wright’s bank account and the receiver general. Only later will we learn how much of these contributions will be admitted as evidence in the trial.

On March 25, 2013, Wright transferred $100,000 in American currency to a Canadian account he controlled, where it landed as CAN$100,660. Wright next arranged for a CIBC bank draft, in the amount of CAN$90,172.24, payable to Nelligan O’Brien Payne LLP, an Ottawa law firm. That firm in turn issued a cheque for the same amount, payable to Duffy. The trail ends with a Duffy cheque for the same figure—down to the penny, also dated March 25—deposited with the Receiver General of Canada on March 28. (Grenon accounted for this time lag, as well as others along the money’s path, to standard bank processing delays).

But Jason Neubauer, one of the two Crown prosecutors working this case, also called upon Grenon to link the Wright money with another development in Duffy’s financial life at the time: the remortgaging of Duffy’s Kanata home.

On March 22, 2013, this refinancing led to a $91,600 deposit in Duffy’s account. On that same day, Duffy paid $80,000 off on his line of credit, which had then ballooned to $86,059 (just below a $102,059 high that came the previous year). Though Neubauer didn’t draw a definitive link today, his questions and Grenon’s testimony made it clear the Crown believes these events—Wright’s indirect transfer to Duffy of $90,000, the Kanata refinancing, the huge credit line payment—are related.

To sharpen this coming narrative, Neubauer prompted Grenon to repeat his analysis of Duffy’s financial position in early 2013, an analysis he’d described yesterday.

“I have the opinion that there was a continued pattern of spending more than he made on an annual basis, and using the credit line as a source of funding,” Grenon said. “That’s how his lifestyle was maintained, by refinancing his mortgage … it was sustained by the equity that was in his home here in Ottawa.”

The Crown alleges Duffy funnelled public money through these companies in order to avoid Senate oversight. Just under half the Senate money that flowed into Donohue-related companies can be accounted for through subcontracting payments—for example, to Ezra Levant for writing speeches (Grenon, a numbers man to the very core, could barely pronounce Levant’s name in the witness box, an ignorance of nitty-gritty Ottawa that only added to his credibility).

But Grenon’s analysis leaves some $33,000 of Senate money Duffy sent Donohue’s way unaccounted for, leaving room for shady dealings between the pair that the Crown is sure to exploit later.

It was a complicated day—spectators in Courtroom 33 felt lost in this universe of exhibits, this galaxy of paper, a revolving, careening constellation of digits that only Grenon and Neubauer felt comfortable manoeuvring. (Vaillancourt remains inscrutable, and yet so diligent and on the ball you have to imagine he gets everything too.)

Shortly before Neubauer finished examining Grenon, Donald Bayne, Duffy’s lawyer, leaned over his client and whispered, causing Duffy to smile, and to nod his head.

Perhaps he was telling Duff to just wait.

Because when Bayne did begin his cross—he was polite with Grenon, introducing himself, which he does not always do with Crown witnesses—Bayne launched into fireworks.

This began at 3:50, with just 40 minutes of court time left, and Bayne made them matter.

He expertly walked Grenon through a series of propositions about Wright’s money and its arrival at with the receiver general that, one after the other, Grenon accepted.

That the $90,172.24 originated in a bank account controlled by Wright, and not by Duffy, and that it travelled as a bank draft via Nelligan O’Brien Payne.

That the same day all this was happening—March 25, 2013—Duffy cut a personal cheque for precisely the same amount, payable to the receiver general.

“The amount is pretty critical—I mean, it’s pretty tell-tale,” Bayne said, and Grenon, though skeptical, ultimately agreed with this too.

That a cheque in Duffy’s name and dated March 25 got cashed by the receiver general on March 28.

And that, whatever Grenon’s analysis, this cheque that arrived signed by Duffy made it look like the money was coming from Duffy and no one else.

“In the eyes of the receiver general?” asked Grenon. “Yes it does.”

So, Bayne said, launching into his final questions at lightning speed, fitting them all in before the bell rang at 4:30 p.m.:

If you’re Nigel Wright and you want to baffle the receiver general and the rest of the Canadian voter public into thinking that Mike Duffy is owning up to his mistake claiming travel expenses in Ottawa, and that he’s paying back the $90,000 as penance, this is how it would be done—right?

Grenon demurred. This is exactly how you wouldn’t do it if you wanted the path between Wright and Duffy concealed. It doesn’t hide a thing.

But Bayne protested, saying not all crimes are perfect, that plenty of crime indeed gets done imperfectly—if they weren’t you’d have no use for places like Courtroom 33.

You wouldn’t be able to see the crime at all, if it was perfect.

Here we were riding our slurry of dirt through this winding journey, and now Bayne was suggesting just how dirty it was—a journey of money and politics and the PR management of Ottawa rottenness.