The tactile politics of Justin Trudeau 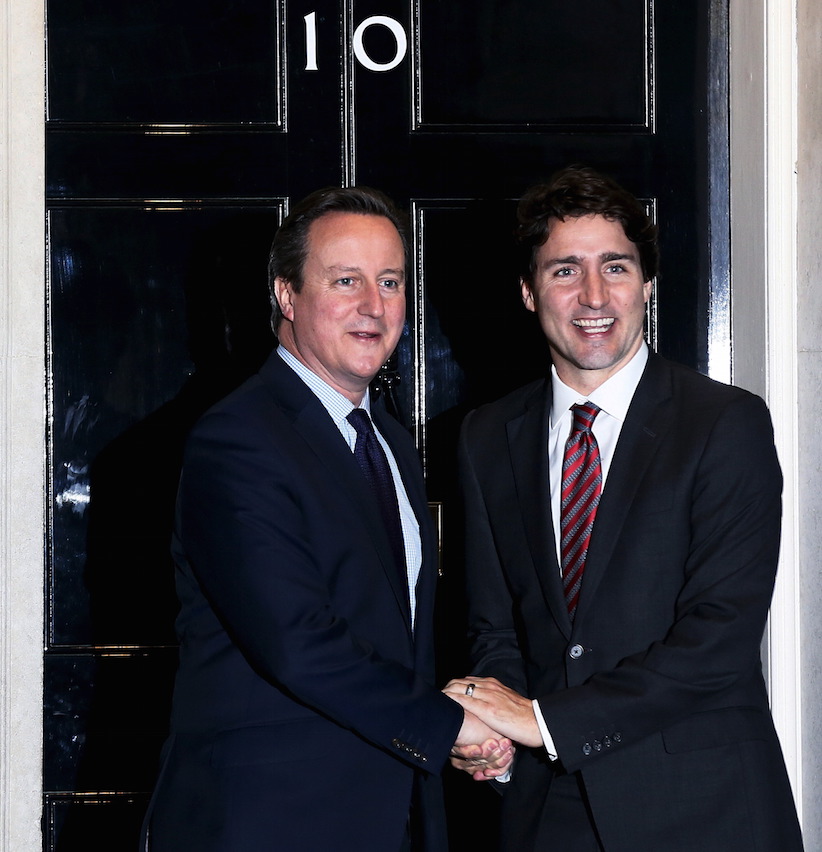 Readers of Britain’s Daily Mail were informed this week of a grave insult to their nation’s honour. “Prime Minister David Cameron was greeted by his Canadian counterpart Justin Trudeau with a patronising handshake outside 10 Downing Street today,” the Mail reported.

The difference between a respectful handshake and a patronizing handshake would seem to be the number of hands involved, the latter including the use of both hands by one of the shakers. And, indeed, Prime Minister Trudeau not only joined right hands with Cameron, but also placed his left hand upon Cameron’s right. “Mr Trudeau opted for a double-handed approach known as the ‘politician’s handshake,’ which is seen by some psychologists as potentially implying a false sincerity or one-upmanship,” the Mail explained.

If it is any consolation to the Brits, a people not known for their warmth, this would seem to be something like Trudeau’s standard handshake—as evidenced, in fact, by photographs posted by the Daily Mail of the Prime Minister greeting Governor General David Johnston and Turkish President Recep Tayyip Erdogan.

Indeed, this physicality of greeting would seem to be in keeping with who Trudeau is and how he seeks to practise politics.

“It is often said that politics is a ‘contact sport,’ by which people mean it is rough business. That’s true. It is not for the faint of heart or thin of skin. But I think of it in another way: politics is a tactile business,” Trudeau wrote in Common Ground, his autobiography, released earlier this year. “You need to spend time, real time, with the people you seek to represent: in coffee shops, around kitchen tables, at backyard barbecues. You have to listen, and absorb the views and values of your community. You have to work at it.”

In winning the riding of Papineau, Trudeau campaigned, he recalled, with a “direct, vigorous, and personal way of delivering the message.”

He enthusiastically poses for pictures with members of the public—his critics have tagged him with the modern phenomenon of the “selfie”—he puts his hand to his heart when accepting applause and, improving on the old standard of kissing babies, periodically balances his infant son aloft with one hand. (His other party trick is an ability to fall down stairs without hurting himself.) His first act as prime-minister-in-waiting was to greet commuters at a local subway station. When he visited Queen’s Park after the Oct. 19 election, he fully embraced the premier of Ontario. The swearing-in of his new cabinet two weeks later was a procession of hugs, shoulder holds and deep stares.

This neatly contrasts, of course, with the aloof manner of Stephen Harper. But there is something both modern—in keeping with the current zeal for the direct and personal—and old-fashioned about it. John A. Macdonald has been recorded as an enthusiastic shaker of hands and kisser of girls. Robert Caro has written that no politician shook hands like Lyndon B. Johnson, who greeted women with a kiss on the cheek. “Clinton never left a roomful of people until he had spoken to and physically touched as many as he could,” Sidney Blumenthal has written of Bill Clinton. Barack Obama and Michelle Obama briefly intrigued the world with a fist bump. Mrs. Obama later caused a fuss in Britain when she and the Queen put an arm around each other. If you’d been taking bets on how Trudeau would greet the Queen, a hug would’ve had to have been on the board as a longshot at worst.

As with any attempt at human interaction, things can go poorly. George W. Bush’s decision to rub the shoulders of German Chancellor Angela Merkel was widely panned. And Al Gore’s kiss for Tipper was rather awkward for everyone watching. Jean Chrétien’s choking of a protester has somehow come to be fondly remembered, but generally the political leader should leave the throttling of critics to one’s security team (or press secretaries).

Former prime minister John Turner was also known for his two-handed handshakes, but his fondness for reaching out to his fellow humans extended to the patting of female bums, his “penchant for bottom-patting” being of such significance that it was raised during the 1984 leaders debate. Because it’s 2015, that sort of thing should be avoided.

Perhaps it is some kind of faux pas to meet a fellow world leader with the sort of two-handed handshake that Trudeau might otherwise use on a grandmother at one of his campaign events. Possibly Trudeau needs to better differentiate his greetings. And no politician can get by on handshakes and hugs alone. But this does seem to be who Trudeau is as a politician, or at least how he wishes to be seen—the physical manifestation of doing politics differently.