The Throne Speech and the ambitious politics of Justin Trudeau

Justin Trudeau has set himself up to be defined by his ambitions. The flip side of that could doom him. Aaron Wherry on change's possibility 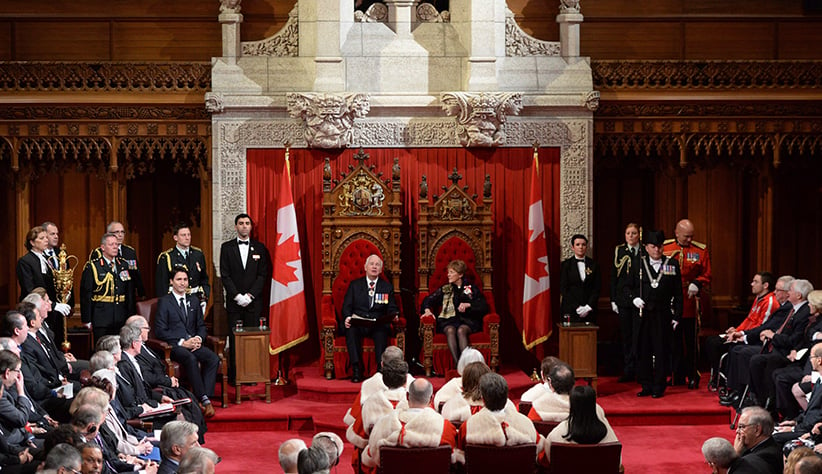 Governor General David Johnston delivers the speech from the throne in the Senate Chamber on Parliament Hill in Ottawa, Friday December 4, 2015. Sean Kilpatrick/CP

After a self-deprecating joke to acknowledge his wife, Justin Trudeau took a breath and quoted Goethe. “Make no small dreams,” he said, first in French and then in English, “they have not the power to move the soul.”

Actually, though he thought he was quoting Goethe, he actually might’ve been passing on a misattributed paraphrase of something the American architect Daniel Burnham once said. Though it’s also possible that Burnham didn’t say it either. Whoever said it, and however Trudeau came to the sentiment, here it was on the evening of Oct. 2, 2012, the sentence with which Trudeau began the speech that announced his candidacy for the leadership of the Liberal Party of Canada.

So there has always been a certain ambition to Trudeau’s candidacy. And ambition has so far been explicit to his premiership. Even in the context of a short and “workmanlike” Speech from the Throne.

“The agenda outlined today is an ambitious one,” the Governor General declared on Trudeau’s behalf this afternoon from the throne in the Senate, the new Prime Minister seated awkwardly to the left, as per tradition.

On the night this October when his Liberals won 184 seats, Trudeau said his government would be “positive and ambitious and hopeful,” just as Canadians demanded. The next afternoon, asked by a reporter to account for his party’s victory, he credited “the right kind of concrete but ambitious vision of this country.” He used the a-word twice while standing in the driveway of Rideau Hall on Nov. 4 after his cabinet had been sworn in and twice the next day when he addressed his caucus for the first time, and it is found in the third sentence of each of his ministers’ mandate letters.

Related: Paul Wells on what those mandate letters had in common

The word was also there in the concession speech of Tom Mulcair on Oct. 19, but in that case it sounded like a nod to the potential for failure. “In this campaign, Mr. Trudeau made ambitious commitments to Canadians,” the NDP leader noted, “and Canadians will have high expectations for their next Parliament.”

So possibly this is the word that will define Justin Trudeau. 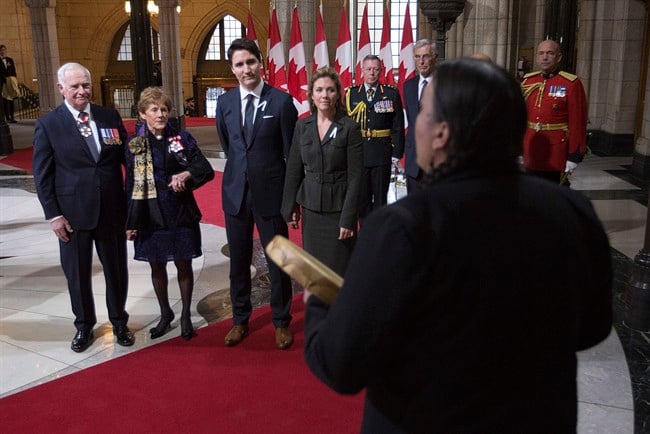 In an essay published in 2003, Jim Coutts—one of Pierre Trudeau’s closest advisers and someone who provided counsel to Justin Trudeau’s closest aide, Gerald Butts—divided Canadian prime ministers between “mechanics” and “activists.” The former sought to keep the machine of government running steadily, the latter desired change and reform. “For the most part,” he wrote, “we have had generally admirable political leaders who, by natural inclination or in response to years of experience, emerge as highly cautious public figures; they genuinely believe that if they leave office with things no worse than they found them, they will have contributed much.”

That would not describe this Prime Minister at his outset. It is impossible to predict what he might have to say for himself four or eight or more years from now, but his could be the most ambitious and able government to take office in 30 years, since the equally dramatic victory of Brian Mulroney’s Progressive Conservatives in 1984. In fairness, whatever Jean Chrétien’s ambitions, he had a deficit to eliminate. And while Paul Martin had ambitions, he maybe had a very small chance of implementing such stuff.

“The best way of looking at it is how do governments seek to characterize themselves,” says Scott Reid, the former adviser to Martin. “Governments like [Lester B.] Pearson, Mulroney, Martin, those are examples of governments that deliberately invited higher expectations and indicated that they were going to be ambitious.” Chrétien and Stephen Harper, Reid argues, “wanted the public to see them not as ambitious, not as sweeping, but as managerial, careful, competent, incremental.”

Mr. Harper was no doubt ambitious—he did at least once allow himself to describe his agenda as such—but his ambition was for an ideology premised on reducing the ambitions of the federal government. And even that much he mostly tried to do implicitly.

These Liberals were elected on the premise of “real change” from nearly everything about the Harper government.

Some of that is fairly easy. Smiling more and mocking less and semi-regularly submitting the Prime Minister to more than a few questions from reporters would, for instance, count as change. Trying to do big things would be different too. Accomplishing those big things is the real trick.

Even before arriving in the Senate to hear his government’s Throne Speech recited, Trudeau was in the midst of two such things, having met with the premiers to discuss climate change and his government having set in motion a plan to deliver 25,000 Syrian refugees to Canada.  Were Trudeau’s government to establish a path toward this country fulfilling its international climate target for 2030, he would succeed where Mulroney, Chrétien, Martin and Harper effectively failed. Joe Biden could fairly describe it as a BFD. Meanwhile, though the actual commitment is a fudge on their campaign promise, the Liberals have touted the resettlement of Syrian refugees as a “national project” and Calgary Mayor Naheed Nenshi has said that it will be “defining for us as a nation.” And set against the pall of recent anti-Muslim attacks it can feel as if the national soul is in the balance.

Both are wildly complicated and carry risk, but both are the sort of things that would define Trudeau’s time in office, items one can imagine being cited some decade from now as key points in his legacy. 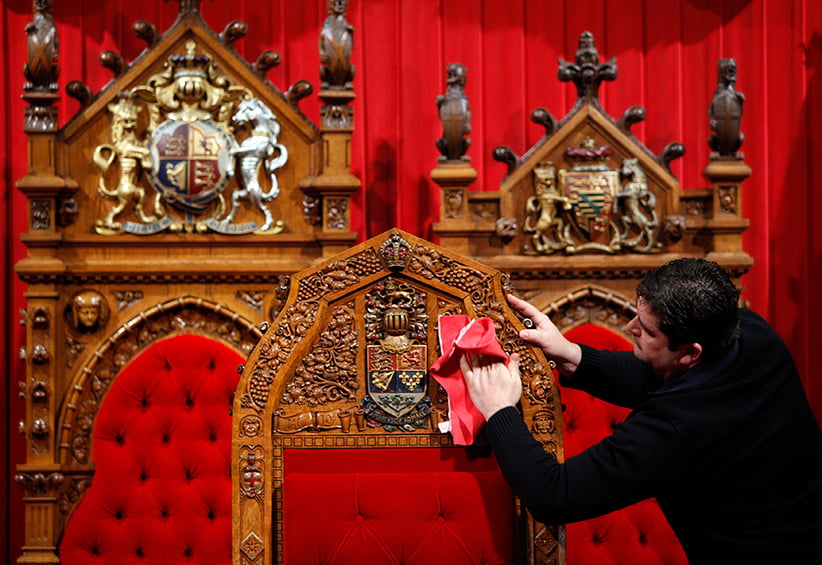 Charles Lamoureux cleans the Senate chamber on Parliament Hill in Ottawa February 25, 2010. Canada’s Prime Minister Stephen Harper will outline his government’s agenda in the Speech from the Throne on March 3. (Blair Gable/Reuters)

And then there is everything else. Among the bullet points of those mandate letters are commitments to electoral reform and parliamentary reform, new funding for infrastructure and Aboriginal communities, changes to Employment Insurance and pensions, new performance standards for government, reviews of the tax code and the criminal justice system, new health accords with the provinces and a framework for subsidized child care, an inquiry into missing and murdered Indigenous women, the legalization of marijuana, a new defence strategy and an array of social programs, including a new food policy. The Liberals will have to buy a new fighter jet and they’ll have to write a new law for physician-assisted death and they are committed to do something about C-51, the previous government’s anti-terror legislation. They will at least be able to check off their ballyhooed tax cut next week.

The Speech from the Throne was a 1,650-word, short-form version of all that (even fewer words if you subtract the Governor General’s opening platitudes and the two pro-forma concluding paragraphs). The complaints afterwards were about what wasn’t included. Before these four years are finished, the complaints might be that this government committed itself to too much.

Related: The speech was short, but the agenda is packed

Coutts’s focus in that essay was the Pearson government and the window of opportunity that allowed it to pass arguably the most substantial domestic agenda of any federal government in history. In five years, Pearson established national medicare, the Canada Pension Plan, the Guaranteed Income Supplement, student loans, immigration reform, justice reform, a royal commission on bilingualism and a national flag. Yet when he departed he was thought to have governed in chaos. The flag debate was famously long and torturous. And the potential for messiness now is great (in size and, for those of us in the press gallery, allure). And there are the “events” that can’t yet be foreseen. Trudeau is the first prime minister to start his term with Twitter. And the Trudeau Metre will be regularly refreshed.

The degree to which expectations might doom him is hard now to figure. “Canadians do not expect that Trudeau can implement all that he promised over the course of the campaign, nor do they necessarily think he should try,” Ensight reported from its exit polling. “But voters’ low expectations do not mean they lack confidence in the Liberals or feel that Trudeau lacks political will.” And so it is both the willingness of voters and Trudeau’s team which will now be tested. Indeed, it is the team’s ability and desire that Coutts identified as the fourth condition for success in implementing major social reform. In passing on Coutts’s advice, John English suggested that Paul Martin govern “as if there were no tomorrow.” Which sounds like fun.

In his campaign, Trudeau appealed to the possible and coming after, and in opposition to, the Harper era, his government seems particularly like a chance to demonstrate that government can do and be more than some believe. That it might yet run up against the Harper era’s imposed limitations on federal funds looms somewhere on the horizon. But in the meantime it might first prove that government is capable of big things.

“The government will make real change happen,” the Governor General explained. “It will prove that better is not only possible—it is the inevitable result when Canadians work together.”

One can dare to dream. Indeed, there are still ample grounds for that. But governments must create realities.