The Tories and the TV networks: Who is censoring whom?

A Conservative plan to safeguard attack ads draws an attack of its own, and creates a thorny dilemma for networks 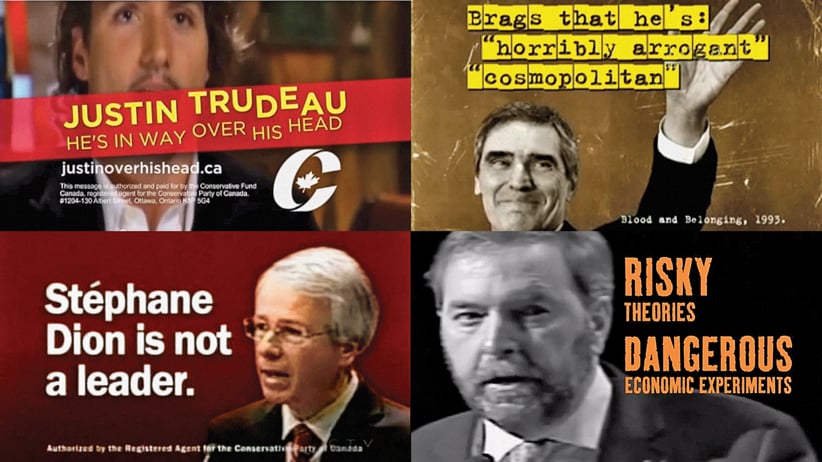 Fair dealing? Networks want the right to ban the use of their footage for attack ads

For at least as long as Stephen Harper has led it, which is nearly as long as it has existed, the Conservative Party of Canada has believed Canada’s big news organizations are out to get it. Now Conservatives believe they have proof.

Our tale begins on Oct. 8, when CTV News reported that the Harper government is preparing changes to the Copyright Act that would allow political parties to use material from news broadcasts in their political ads. Parties wouldn’t need broadcasters’ permission. They wouldn’t have to pay. Any news footage a party liked could be plucked and inserted into a broadcast ad, surrounded by the party’s spin.

The party that’s been doing most of this sort of thing lately is the Conservatives. News clips of a succession of party leaders, including Stéphane Dion, Michael Ignatieff, Thomas Mulcair and now Justin Trudeau, have appeared in Conservative ads that were often effective at wrecking those leaders’ reputation. For this reason—and because CTV reported that the copyright changes will be buried in an omnibus budget-implementation bill that has nothing else to do with election rules—opposition MPs called foul. “Very devious,” said Liberal MP Ralph Goodale. “They just don’t seem to have any ethical boundary at all,” the NDP’s Nathan Cullen said.

Pressed on the issue in different cities on the same day, Harper and his heritage minister, Shelly Glover, offered near-identical defences for the change to copyright laws. Both argued that the change would simply ensure ads of a sort that have been running for years can continue to run—and that broadcast networks must have nefarious motive for blocking them.

“Major television networks should not have the ability to censor what can and cannot be broadcast to Canadians,” Glover told the House of Commons.

In Whitby, Ont., Harper said he’d be “concerned about any proposal that would attempt to censor or block [news footage] from the public.”

It seemed an odd choice of phrase. “Censorship” isn’t the word usually applied to a free press deciding which use it wants to make of information it has gathered. But as details emerged about the context for the copyright change, independent experts started to believe the Conservatives might have a point.

The source for the information was, himself, perhaps not entirely independent. Matt Wolf, an executive at Sun News Network, used his Twitter account to point reporters at other news organizations to a stack of memos he’d gathered from the CBC using Access to Information requests.

One of the first things the new Conservative government did in 2006 was extend the access law so Crown corporations, including the CBC, would be required to release internal information to citizens who request it. From 2006-10, Wolf worked in the government as a staffer for a succession of cabinet ministers, winding up as an “issues adviser” in the Prime Minister’s Office where, according to his LinkedIn account, he “controlled reactive communications and risk mitigation for over a dozen minister’s offices,” before leaving to work at Sun News.

But the correspondence Wolf found between the editor-in-chief of CBC News, Jennifer McGuire, and her colleagues at other news organizations, reveals a high degree of consultation among natural competitors—and a weak legal case.

What got the networks talking was the release of Conservative ads on the day Justin Trudeau became Liberal leader in 2013, showing Trudeau strutting with his shirt open to the waist at a charity auction. The Huffington Post owned those images. Later Conservative ads used images from an interview with the CBC. In April of this year, McGuire wrote to her counterparts at Shaw Media, Bell Media, Rogers Media and Radio-Canada “proposing that . . . we send a note to parties saying, effective immediately, that networks will not air ads with unauthorized use of other broadcasters’ news content. I believe this is the only way to shut it down.” (Rogers owns, among other news organizations, CityTV and Maclean’s.) In her correspondence with her colleagues, the only party ads McGuire mentioned were Conservative. On April 22, the news organizations released just such an open letter. Sun News, notorious for many of its employees’ links to the Harper Conservatives, wasn’t invited to join the common front.

What’s most striking in the correspondence Wolf received was McGuire’s candid admission to her colleagues that individual attempts to block use of their material based on copyright infringement “might not be a successful route,” because courts would probably view such use as so-called “fair dealing.”

That passage is a red flag to Michael Geist, a specialist in Internet law at the University of Ottawa and a frequent Harper critic. In an email to Maclean’s, he wrote: “I don’t see how anyone can read the ATIP docs from the CBC and not come to the conclusion that: 1) The CBC knew it could not use copyright law to stop these ads; 2) it decided it wanted to stop them anyway; 3) it convinced the other broadcasters to adopt a policy to not run the ads notwithstanding the copyright law.”

That’s a highly problematic stance to take. “If what those documents appear to reveal is true, then the [agreement] that those documents reveal might be an illegal one, contrary to section 45 of the Competition Act,” which governs agreements among competitors, wrote University of Toronto law professor Ariel Katz.

It’ll be up to courts to sort the legalities out. For the moment, what’s striking is the contrast of two world views. On one hand, broadcasters who see a Conservative government willing to use their work out of context for political ends. On the other, a governing party that finds at least one possible path to election victory blocked by a common front of the nation’s largest news organizations.

To the networks, a common front might be a logical step after they’ve spent years watching the Conservatives, much more than any other party, use their material without consent or even warning. To the Conservatives, the united networks represent both a serious operational challenge and the confirmation of long-standing suspicion.

The challenge is the possibility that the party might, for the first time, have its ads blocked from public view during a crucial election. Such a turn of events “would not be an existential threat to us, but it would be a serious problem,” a senior government source said. The hunch is that media elites were always against the Conservatives. After the broadcasters sent their open letter in April, the Conservatives’ director of political operations, Fred DeLorey, sent a fundraising letter to party supporters. “Despite all his verbal flubs . . . Justin Trudeau is still awarded a shining halo by liberal-minded journalists and pundits,” he wrote. “Media convergence has greatly complicated our Conservative party efforts to present the unfiltered facts and foundations behind our policies.” Fundraising off the networks’ move, it turns out, was only the first move. Now the Conservatives plan to block it.