The Tories are in trouble

Ignore the daily squiggles of each individual poll — they’re meaningless noise. But average them all together, track them over time, and a picture emerges. And it adds up to trouble for the Conservatives.

It’s disturbing enough that both Harris-Decima and Nanos now have them at 34% — the first time either pollster has put them below 35% since the campaign began. A week ago, Harris had them at 39, Nanos at 38.

But it’s the overall trend that should really have Tories worried. The chart below tracks the daily average of all of the polls taken since the first days of the campaign. It doesn’t take a statistician to see what’s been happening. 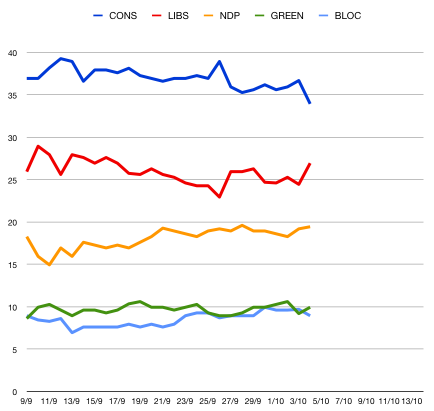 I know, I know: a few days ago I was pointing out that all the parties were within a percentage point of where they started. But that’s no longer true of the Tories, and in any case the better comparison point may be with where the parties were after the first week. Both the Tories and the Liberals have dropped several points since then — the difference being that the Liberals seem to have arrested their slide. (The NDP and Bloc started badly, but have both come on since then — only to hit their apparent ceilings.)

Another warning sign for the Tories: Stephen Harper’s leadership edge over his rivals, once the Tories’ ace in the hole, is eroding. Nanos, Harris, even Angus Reid (who puts the Tories at 40%) all show the same thing. Here, first, is a graph of Nanos’s composite leadership “scorecard” over time:

Still a ways ahead, but Dion and Layton are closing. 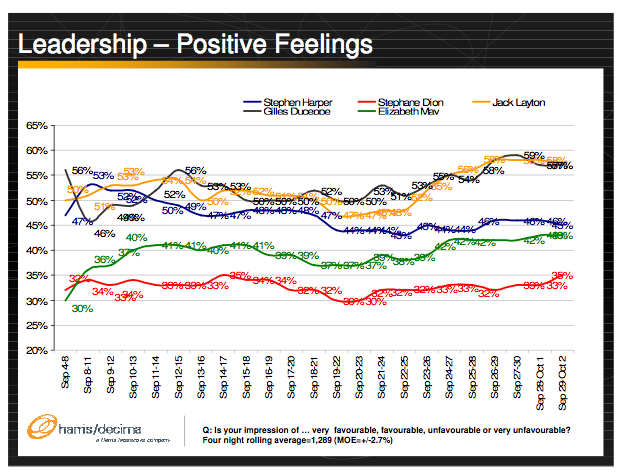 Harper’s the blue line in the middle. While this chart is less favourable to Dion, the striking thing is that Harper’s numbers are the only ones to have declined in the course of the campaign. Angus Reid’s numbers show the same.

The debates don’t seem to have helped: even in the English debate, which Harper was said to have “won,” respondents in Ipsos’s instant poll said they had a lower opinion of him as a result of his debate showing  — the only leader to suffer such a fall.

I don’t want to make too much of this. But if you’re running a policy-lite “leadership” campaign, and the air is leaking out of your leader, you better hope you can get to election day without crashing.