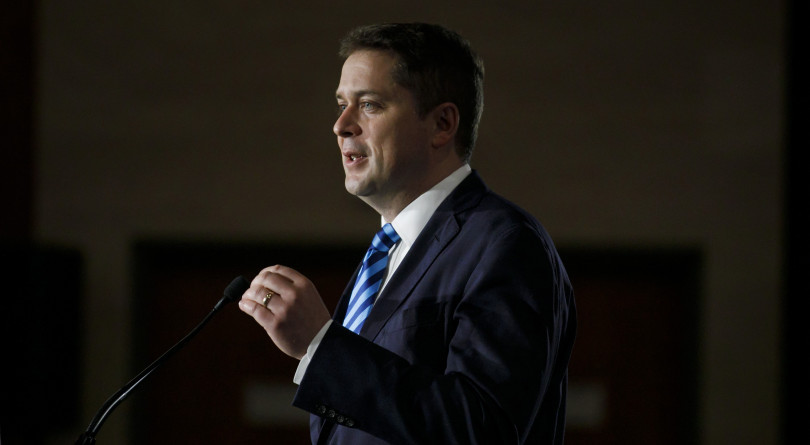 In a room across the street from the Alberta legislature now run by Jason Kenney, Andrew Scheer yesterday took a shot at the Prime Minister—and pledged to save Canada from another Trudeau. “It’s clear that every time there’s a Trudeau in the Prime Minister’s Office, our union begins to crack,” Scheer told the Royal Glenora Club in Edmonton.

The Tory leader reiterated his vision for a nation-building energy corridor from one side of Canada to another. But that’s not nearly his most ambitious plan — for that, Scheer looks to interprovincial trade, every government’s easiest-to-solve problem (until they try to do something about it). “My goal will be simple,” he said. “This will be nothing like the half-hearted attempts at improving internal trade that have marked our recent history.” If Scheer wins, a new era of interprovincial horse-trading will dawn—within 100 days, he claims. Finance Minister Bill Morneau shot back in a statement that Tories are “overpromising on things that they know they can’t deliver for Canadians.” [Scheer’s speech, CBC News]

As for the PM: Trudeau chose the Women Deliver conference in Vancouver as the setting for his own announcement of billions in funding for global maternal and child health. Readers will recall former PM Stephen Harper also pledged billions on similar priorities in 2010. The biggest difference: $700 million in annual funding will now support sexual and reproductive needs. (The former Tory government had stopped—per iPolitics at the time—sending funding for contraceptives to a UN agency that was critical of Harper’s policy.) [Globe and Mail, iPolitics refresher]

CBC’s Katie Simpson scored a scoop yesterday, buttressed by senior sources aplenty, about how Vice-President Mike Pence’s trip to Ottawa was nearly derailed by a tariff conversation between ambassadors. Canada’s David MacNaughton reportedly told Kelly Craft that Pence would be better off visiting Cuba—where they “at least understand that they’re viewed as a national security threat.” After much diplomacy, the tariffs fell and Pence came knocking. [CBC News]

More on trade: With 40 per cent of Canada’s canola export market threatened by a diplomatic spat with China, federal Trade Minister Jim Carr heads to Japan and South Korea today to shore up new international customers. Carr is joined on the trans-Pacific trip by allies-of-convenience Jeremy Harrison and Tanya Fir, trade ministers in Saskatchewan and Alberta governments that tend to pick fights with the feds—not help them make friends. Carr’s trip coincides with a G20 trade ministers meeting on June 8-9. [CBC News]

Still in Japan: Defence Minister Harjit Sajjan yesterday wrapped up a trip to Tokyo, where he met with his counterpart and visited a handful of military personnel stationed nearby. That trip followed a stop in Singapore for the so-called Shangri-La Dialogue on regional defence and security. Now, Sajjan is en route to the beaches of Normandy to honour Thursday’s 75th anniversary of D-Day. Total distance covered on the defence minister’s exhausting overseas haul? Google Maps says 35,404.72 km. [Stop #1 and #2, Stop #3]

Still near Normandy: PM Trudeau will arrive in London (the U.K. one) bright and early this morning after his version of a transatlantic redeye. He’s got a long list of VIPs on his agenda: soon-to-be-outgoing U.K. PM Theresa May, newly re-elected Aussie PM Scott Morrison, London mayor Sadiq Khan and, of course, Canadian veterans. [PM’s itinerary]

Happy World Environment Day! Catherine McKenna will literally be surrounded by trees at an announcement today at Ottawa’s arboretum. [Seriously, check this out]