The Trudeau-Scheer brawl before the storm 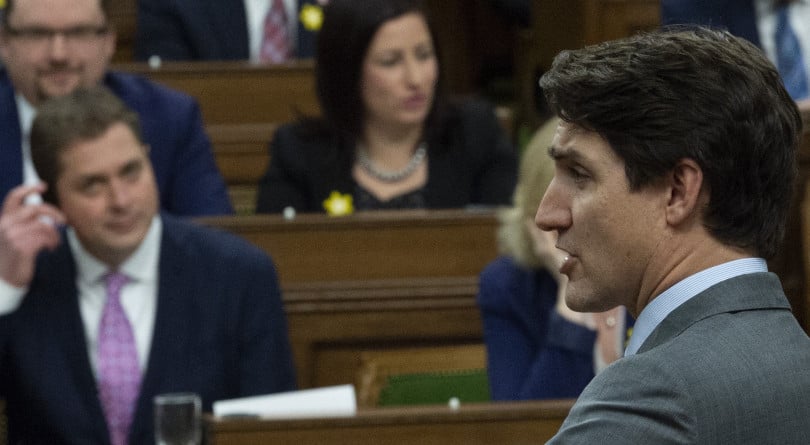 Prime Minister Justin Trudeau responds to a question during Question Period in the House of Commons Wednesday April 10, 2019 in Ottawa. (Adrian Wyld/CP)

If Canadians needed a reminder of the mud fest that awaits them this fall once the federal election campaign gets underway, Wednesday’s raucous Question Period delivered in spades.

Shots fired: Prime Minister Justin Trudeau and Conservative Leader Andrew Scheer were at each other’s throats from the start, with Trudeau accusing Scheer of misleading Canadians and tolerating white supremacist views and Scheer firing back about Trudeau’s hidden truth on SNC-Lavalin and smear tactics. It took Speaker Geoff Regan shushing full volume at times to bring order to the House—if this keeps up he may need to borrow a crowd-control technique or two from his more bellicose counterpart across the pond, U.K. Speaker John Bercow. (Huffington Post QP video)

The episode prompted Scheer to state he has “always 100% denounced white supremacy and racism and anyone who promotes those hateful ideologies.” It wasn’t Facebook’s decision to ban white nationalist media commentator Faith Goldy and a clutch of white supremacist groups earlier this week that spurred on Scheer’s declaration, despite the best efforts of Liberals to highlight his past connections to Goldy. Instead it was a bafflingly-worded question from Conservative Sen. Leo Housakos to Foreign Affairs Minister Chrystia Freeland during a Senate committee hearing the day before. “I would find it disturbing to believe that there is a politician in this country that believes that white supremacy is a threat to our way of life in Canada, to our communities, to our democracy,” Housakos told Freeland, teeing her up for a very tweetable video clip of her warnings that white supremacists “are a very real, very grave threat to western liberal democracy.”   (Toronto Star, @cafreeland Twitter)

While Housakos later clarified his “awkward” phrasing, which Scheer accepted, events played out as CSIS Director David Vigneault testified himself that the agency was “more and more preoccupied by the number of ultra right-wing extremists.” (CBC News)

Just do it: It’s unclear just how long Scheer will try to taunt Trudeau to follow through on his threat and sue the Opposition leader for libel, but he isn’t giving up just yet. On Wednesday, while standing outside the House of Commons and without the protection of parliamentary privilege, Scheer re-read every word of the March 29 statement on SNC-Lavalin that had raised Trudeau’s ire. (Global news)

The math behind Trudeau’s feminism: Because Trudeau clashed with and eventually ejected two once-prominent women cabinet minister from the Liberal caucus, the Prime Minister has come under fire for being a “fake feminist.” But aside from the question of whether two male cabinet ministers would have fared any better (doubtful), John Geddes digs into the actual numbers, in terms of Trudeau’s political appointments, to see if his actions are worthy of his feminist credentials—and determines that on this front at least, Trudeau is doing politics differently:

As of the end of 2018, 49 per cent of [Governor in Council] appointments had gone to women, according to Privy Council Office data, up markedly from 35 per cent in 2015, the year the Trudeau Liberals beat Stephen Harper’s Conservatives in an election. That 14-point rise in the share of these plum federal jobs going to women compares to just a four-point increase, from 31 per cent to 35 per cent, in the previous three-year period.

Those numbers represent—to home in on just one significant segment of them—a shift from women filing only about a third of the seats on Crown corporation boards when the Liberals took power to very nearly half now—up from 34 per cent at the end of 2015 to 48 per cent at the close of 2018. That’s up 14 points in three years of Trudeau rule, compared to six points over the previous three-year span. (Maclean’s)

Trudeau falls for his own image: Trudeau’s social media brand remains the envy of progressive leaders around the world. But when a leader decides they have all the answers—as Trudeau has repeatedly demonstrated of late—and wants the levers of democracy to align to their vision, only bad things can happen, writes Adnan R. Khan.(Maclean’s)

Jason Kenney, pipeline killer: Making her case for a second chance with voters in next week’s Alberta election, Rachel Notley tells Jen Gerson that United Conservative Party leader Jason Kenney is playing a dangerous game with his us-versus-them threats against the rest of Canada, because it will doom any chance of getting a pipeline built:

If I’m not here and Jason Kenney is here and starts randomly trying to turn off the taps, creating massive amounts of investor uncertainty with that, by the way, and then demonizing Canadians outside of Alberta then I think the public support for the pipeline will start to go down.

The federal government was clear that our emissions cap was part of their deal in terms of approving it. Mr. Kenney wants to blow that up, so I think it’s a risk.” (Maclean’s)