The WE scandal and Justin Trudeau's testimony: A primer

The Prime Minister took questions from MPs on the Commons finance committee. Here's what you need to know about Parliament's midsummer fireworks display. 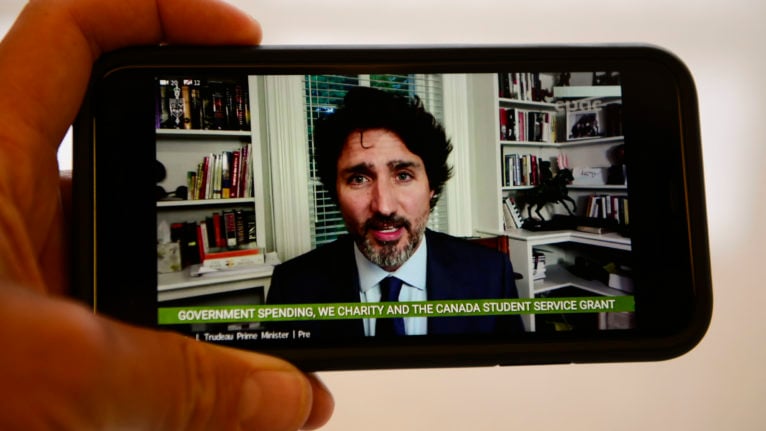 Prime Minister Justin Trudeau is viewed on a mobile phone as he appears as a witness via videoconference during a House of Commons finance committee in the Wellington Building on July 30, 2020.(Sean Kilpatrick/CP)

In the latest development in the WE Charity drama that’s taken over Ottawa this summer, Prime Minister Justin Trudeau appeared at the House of Commons finance committee on Thursday.

Twice before, the federal ethics commissioner has dinged Trudeau for breaking ethics rules. First, he took a secret family vacation to the Aga Khan’s island in 2016—and used a private helicopter to get there. Thus was born the commissioner’s first investigation report into the sitting PM. Last year, an exhaustive report into the PMO’s insistence that SNC-Lavalin be offered a deferred prosecution agreement—a mechanism that allows companies to escape conviction—found the Trudeau team had fiddled with prosecutorial independence. Both times the commissioner said Trudeau broke the law.

Mario Dion, the current commissioner, is investigating Trudeau once again. After the Trudeau Report and the Trudeau II Report, so there will eventually be a Trudeau III Report. Mary Dawson, Dion’s predecessor, said earlier this summer that Trudeau may have a “blind spot” on ethics.

So MPs have questions for a Prime Minister who keeps breaking the law and may be found guilty thrice before this is all said and done.

His appearance was not unprecedented though. As parliamentary geek David Akin explained, four sitting prime ministers have testified at House committees—William Lyon Mackenzie King in 1924; R.B. Bennett in 1932; Joe Clark in 1979; and Pierre Trudeau every year from 1980 to 1983. Stephen Harper also sat down at a Senate committee in 2006 to talk about Senate reform. So it’s not unheard of for PMs to find themselves in this particular hot seat. But it is rare, so this is not exactly a typical meeting.

If you need a basic primer on the WE scandal, see the bottom of this post.

What did the opposition want to learn?

Before the meeting, Conservatives published a list of 16 questions they hoped to ask the Prime Minister. They probed the PM’s relationship with WE, his family’s financial ties to the organization, his understanding of Finance Minister Bill Morneau’s connections to the charity, his staff’s ability to caution him against conflicts of interest, and how cabinet dealt with the matter. Some, including whether or not Trudeau would cooperate with a prospective RCMP investigation, embraced hyperbole (there’s no hint of criminal conduct at this point, though the Tories want an investigation). Others were rhetorical and unlikely to elicit anything but denials. Some weren’t asked.

What did Trudeau say in his opening statement?

In his opening statement, Trudeau revealed his version of a behind-the-scenes retelling of events. The PM said in early May, he hoped the Canada Service Corps, an existing federal program, could be “super-charged” to deliver the student service grant. He said the COVID-19 cabinet committee debated WE’s involvement in the grant program on May 5, and asked some tough questions. Three days later, on May 8, Trudeau first heard about the WE proposal during a pre-cabinet briefing. (See below for a full explanation of what the WE scandal is all about.)

At that point, Trudeau said he had his own questions about WE’s involvement. He removed the item from the cabinet agenda for that day. On May 21, the PM was again briefed on the WE proposal and was assured, he said, that the public service had done its due diligence—and WE was the only option on the table. “It wasn’t between providers,” Trudeau told the committee. “It was either happening or it was not.” On May 22, cabinet approved WE’s involvement.

What did MPs learn?

Here, we annotate the long list of Tory questions.

1/ Did Justin Trudeau or his office have any contact with WE before handing them a billion-dollar contract?

The Liberals would quibble with the premise of the question—the contribution agreement was worth $543 million. But on the substance, Trudeau said he had no direct contact with WE before they signed that agreement. His chief of staff, Katie Telford, said a member of the PM’s policy shop spoke to stakeholders about the grant program in broad strokes on May 5. WE was on that call.

2/ Was anyone in the Prime Minister’s office aware of WE’s proposals or helping to advance them?

The PM and Telford both claimed only to have learned of WE’s potential involvement on May 8.

3/ Was WE given a massive contract because of their close ties to the Trudeau and Morneau families and the Liberal Party?

This is one of those loaded questions.

4/ Did Justin Trudeau not think that Canadians would find out that WE had paid members of his family more than half a million dollars?

This is another of those loaded questions.

5/ Was Sophie Grégoire Trudeau paid for her WE trip to London in March?

The PM said WE covered Grégoire-Trudeau’s expenses, though under questioning Trudeau was unable to account for an itemized list and seemed unaware of specific trip details. He also couldn’t, for example, name the hotel where she stayed.

6/ Has Justin Trudeau’s family received other financial benefits from WE?

The PM confirmed recent reporting on remuneration received by his mother and brother.

7/ Are there other companies with financial relationships with the Trudeau family that receive government contracts?

8/ Did the Prime Minister know that a member of the Finance Minister’s family worked for WE Charity?

9/ Has the Prime Minister been involved in any contracts, grants or contributions that WE Charity received since 2015?

10/ Did anyone warn the Prime Minister about the many conflicts of interest in this case?

We expand on this one below.

11/ Is there a conflict of interest filter at cabinet? Can the Prime Minister describe it?

Trudeau explained that it’s not up to him to talk to ministers about conflicts of interest. That job falls to ministers and their staff.

12/ Given he’s already been found guilty of breaking ethics laws twice before, has Justin Trudeau actually read the Conflict of Interest Act?

The PM—and later, Telford—said they had, indeed, read the conflict-of-interest rules. Trudeau appeared ready to consult a paper copy on his desk before Poilievre read him Section 21, which governs recusals.

13/ Does the Prime Minister believe that the meetings and discussions the Kielburgers had with various Liberal ministers and their staff are a contravention of the Lobbying Act?

When Poilievre asked this one, the Prime Minister said the Kielburger brothers weren’t lobbying government. (Technically, lobbyists only have to register when they spend at least 20 per cent of their time doing lobbying.)

14/ Has the Prime Minister ever read the Lobbying Act?

15/ Will Justin Trudeau fully cooperate with any RCMP investigation into his latest scandal?

16/ Will Justin Trudeau fully waive cabinet confidences so that the Ethics Commissioner can investigate his third ethics violation?

What did Trudeau have to say about not recusing himself from the WE decision?

Trudeau said he was well aware of the existing connections between WE and his family—including his own appearances on stage at WE events for many years. He knew any WE involvement in the CSSG would be “closely scrutinized.” He was aware that his wife, Sophie Grégoire Trudeau, had spoken at WE Day events (including as recently as March 4 in London, U.K.) and hosted a WE podcast. He told the committee that the ethics commissioner had cleared Grégoire Trudeau’s volunteer work with WE, including reimbursement of expenses. Trudeau also said he knew his mom, Margaret, and brother, Sacha, had spoken at WE events. He was not aware of the details of that work, including payment. Under questioning from Poilievre, Trudeau did not offer the combined remuneration for all the Trudeaus.

Two House committees, finance and ethics, are currently studying the WE foofaraw. The ethics committee has so far met only in-camera on a study to “review the safeguards in place to prevent conflicts of interest in federal government expenditure policies.” But no one’s work here is done.

What is the WE scandal?

On April 22, Prime Minister Justin Trudeau announced a student service grant program pegged at $912 million. Almost two months later on June 23, the feds announced WE Charity—an international development charity that describes itself as a youth empowerment movement—would administer the program. It didn’t take long for Trudeau’s critics to point out the PM’s long history with the charity, which raised suspicion that the fix was in from the start and WE Charity simply benefited from connections in high places.

On July 3, the $543-million contribution agreement that governed the program was kaput. And controversies piled up. Trudeau and Finance Minister Bill Morneau, whose daughter works at WE, didn’t recuse themselves from cabinet discussions on the Canada Student Service Grant. Trudeau’s mother and brother had taken hundreds of thousands in combined speaking fees. Morneau failed to reimburse WE for a “complimentary” trip to Ecuador in 2017, a serious flub he revealed during testimony at a parliamentary committee on July 22. Earlier that day, he cut a cheque for $41,366 made payable to WE to repay the cost.

READ MORE: Every important number in the WE drama that’s consuming Ottawa

All the while, everyone was claiming the public service—not the PM or his staff—recommended WE Charity as CSSG administrators. Rachel Wernick, a senior civil servant, testified to that effect. So did Bardish Chagger, the minister who signed the contribution agreement. But the opposition wasn’t satisfied by what they’d heard, especially as the reputation of WE Charity came into question. Craig and Marc Kielburger, the brothers who co-founded Free the Children in 1995 (later WE Charity), testified for four hours at the Commons finance committee on July 28. Their responses raised yet more questions about the status of their charity as the pandemic hit—and they put up their hands to run the student service grant.

Is this hurting the Liberals in the polls?

The scandal appears to be dragging down the governing party, which had, like many parties in power across Canada, seen a bump for most of the pandemic. Abacus Data had the Liberals as high as 40 per cent in a June 20 poll, but they’ve since dropped five points. They’re just a single point ahead of the Conservatives. The Angus Reid Institute recently found the PM’s personal approval rating, which also saw a boost this past spring, has also dipped.